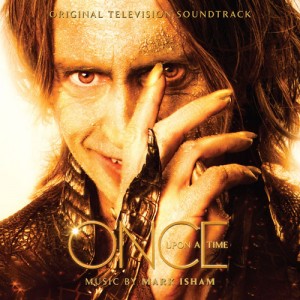 Mark Isham has composed many great soundtracks for movies and TV shows. I (Daniel J. Lewis) think that Isham’s score to Once Upon a Time is his greatest music yet!

You’ll quickly hear that Isham has created unique themes for each character, and develops these through the TV series.

Check out Chapter 12 “Musical Spell” from the Official Video Podcast for Once Upon a Time.

Many of the songs brought back waves of emotions associated with various key points in Once Upon a Time. I hope that you’ll buy the soundtrack and experience the same joy of reliving the hope through music.

There are twenty-five tracks on the CD, with four repeated from the exclusive EP in iTunes.

Noticeably absent from this album is music from the season-one finale’s game-changing last scenes, as well as Red Riding Hood’s theme and a few others.

The hour-long Once Upon a Time soundtrack by Mark Isham is currently $18 from Amazon.com, and we highly recommend getting the CD version for the extra collectibles.

If you enjoyed this review, please let us know in the comments, buy the CD, and let Mark Isham know how much you liked his music.

What is Daniel’s middle name?

After a hilarious forum post trying to guess what the “J.” stands for in Daniel’s full name, Nonnie was the first person to correctly guess it. Because of the fun this was, we decided to award Nonnie a $5 Amazon.com gift certificate that she can use toward the soundtrack or first season.

Thanks for the fun! Enjoy your certificate, Nonnie!

Next live podcast on Monday, June 18

Due to a scheduling conflict, our next live podcast will be at the same usual time of 8:30 p.m. (EDT/GMT-4), but on Monday, June 18. After that, we’ll resume our Wednesday biweekly schedule.