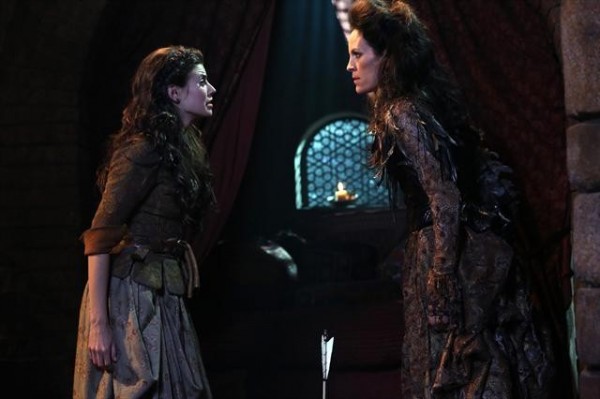 An old nemesis becomes a threat, and a previous threat comes under control. These are just our first thoughts about this Once Upon a Time episode, and we'll share more in our upcoming full episode.

An old nemesis becomes a threat, and a previous threat comes under control.

Ruby’s fear about turning into a wolf during the first curse-free Storybrooke full moon is confirmed when one of the town’s residents is viciously murdered, and Ruby is the prime suspect; Decker – aka King George – threatens to expose David as a shepherd, not a prince, and not fit to run the town as sheriff; and Leroy stumbles upon some treasure in the Storybrooke mine that could help bring Mary Margaret and Emma back into our world. Meanwhile, in the fairytale land that was, Red Riding Hood finds a kindred spirit in Anita (Annabeth Gish), a charismatic and mysterious leader of a pack of humans who, like Red, turn out to be wolves.

Listen to these "Child of the Moon" #OnceUponaTime initial reactions! http://t.co/F9g1uwCH

There will be no episode of Once Upon a Time on Sunday, November 18, so we’ll take the week off the podcast. So we’ll have a podcast on November 14, and then the next on November 25.

Enjoy your Thanksgiving, or take this chance to be thankful! Maybe tweet all of the cast and crew to thank them for their great job!