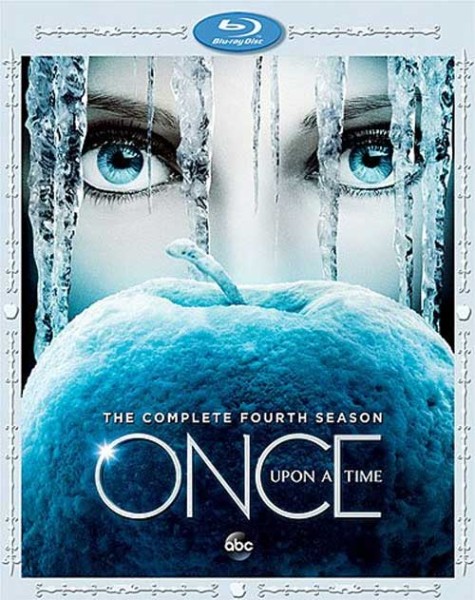 Season 5 may be a few months away but it’s no excuse not to relive last season as Walt Disney Studios Home Entertainment just announced that the fourth season of Once Upon a Time will be available on Blu-Ray and DVD starting August 18, 2015 but is now available for pre-order!

Enjoy all of season four’s episodes, plus a number of never-before-seen bonus features in this 966-minute 5-discs, Once Upon a Time: The Complete Fourth Season Blu-Ray/DVD, which includes “Defrosting Frozen,” a bonus feature that explores how the Disney Animation’s blockbuster film was adapted for the small screen. This particular bonus feature also includes commentaries from the actors who played Anna, Elsa, Kristoff, and Snow Queen. Another chilling bonus feature in Once Upon a Time season 4 Blu-Ray/DVD is “Behind the Magic Tour,” where Josh Dallas and Ginnifer Goodwin showed an exclusive back stage tour on the stages of Once Upon a Time. Go behind the scenes and find out what makes Once Upon a Time the most magical show on television as hosts Dallas and Goodwin take us to the set, introduce the crew, as well as the food.

Once Upon a Time: The Complete Fourth Season is available on both Blu-Ray/DVD formats with a release date on August 18, 2015. Pre-order now and take a trip back to Arendelle, Storybrooke and the Enchanted Forest with the heroes and villains and revel in the intoxicating magic and mystery that is Once Upon a Time!

Once Upon a Time returns with season five on Sunday, September 27.