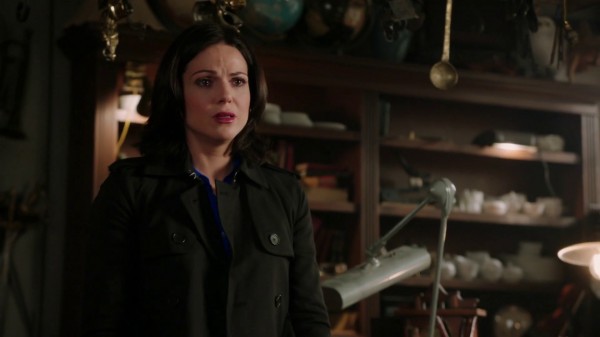 There has been quite a bit of discussion about the fact that Regina wasn’t included in the dinner celebration at the end of “Queen of Hearts” and what it might mean for her possible redemption.

In “Poor Regina“, steliokontos1 felt sorry for Regina and said the scene of Regina left by herself at the end was “a real downer.” On the other hand, Midnight Dreary replied in the same post that it would be quite out of character for Snow and Charming to invite a serial killer like the Evil Queen to their celebration dinner after all she has done to them.

Personally, I was split right down the middle on this question. While I couldn’t expect them to invite Regina to dinner, the look on her face when Henry pulled away to go to dinner with Emma was heartbreaking. In a span of a few seconds Regina plummeted from the height of receiving her first hug of the series from Henry to the depth of being alone again. This may be an indication that her road to redemption will be a long and bumpy one and she is going to have trouble dealing with the fact that her changes don’t automatically give her everything she wants.

This topic came up quite a bit in “Queen of Hearts – Favorite & Least Favorite Moments.” Again, opinions were divided. EvilQueen felt that the Charmings ignored the fact that Regina had just saved Snow and Emma and felt that the heroes should show more forgiveness—not necessarily inviting her to dinner but recognizing that she is going to need some emotional support in her attempt at reform.

SnowFalls pointed out that Emma did thank Regina at the well and argued that should be all that could reasonably be expected. Elle pointed out that Henry’s appeal to Regina was an encouragement in itself; he talked with her and convinced her to do the right thing instead of sneaking behind her and finding a way to foil her plans. And he did reward her with that hug. That was the first time we have ever seen Henry hug Regina and she was clearly moved by it. Elle also added in a later post that Regina has yet to show much real remorse for what she has done to so many people (although she did apologize to Henry).

Midnight Dreary invited Evil Regals and other fans to rejoin the “Regina Mills/Evil Queen Character Analysis” thread. PriceOfMagic responded by proposing that Regina will fail in her attempt at redemption and end the season worse than ever. The consensus seemed to be that it is indeed very likely she will have a long and tough road to redemption. The pain on her face at the end of “Queen of hearts” suggests that may well be the case.

Check out these separate forum threads and join the conversation!

« Once Upon a Time Roundtable 1
Unanswered questions, August & Henry, Jack the Giant Killer, Neal/Baelfire as Peter Pan – ONCE070 »