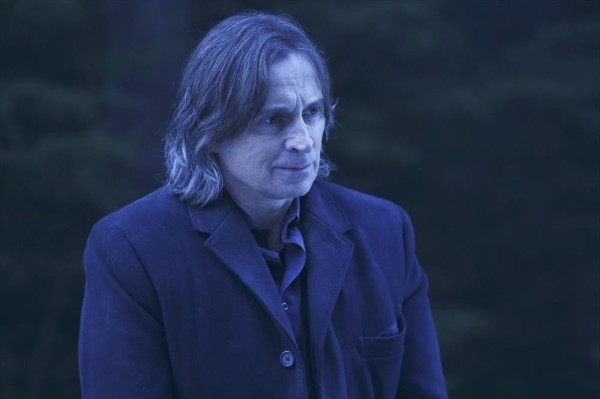 The hiatus is finally over and the gang is back for the continuation of their adventure! With the Dark One banished from Storybrooke, the lives in Storybrooke continues but as they attempt to release the Blue Fairy and everyone inside the Sorcerer’s magical hat, the Dark One and his very own tête a tête a tête a tête begins their journey to the end of their misery and change the odds. Listen as we discuss our initial reaction of the Spring Premier episode, Darkness on the Edge of Town.

With Gold banished from town, the residents of Storybrooke attempt to resume their normal lives. Hook and Belle search for a way to release the fairies from the Sorcerer’s hat, while Emma, Henry and Regina continue to look for clues that could lead them to the Author. But when a terrifying darkness descends on the town, Emma and Regina are forced to confront the true nature of evil. Meanwhile, in New York, Gold and Ursula enlist Cruella De Vil to join their cause.

These are just our first thoughts about this Once Upon a Time episode. We’ll share more about “Darkness on the Edge of Town” in our upcoming full discussion live on Wednesday March 4, at 7:00 p.m. (EST/GMT-5).

This was a cool episode. It brings a lot of answers and a lot of new questions; questions that, as Once Upon a Time goes, we didn’t think about that we know want answers to.

So Regina’s Mayor again. How did they come to terms with that? Did Snow just decided that she’s actually not Mama Mayor material? And what happened between Snow White and Ursula? Take it what you will, it can’t be too, too terrible? However, what made it so dark, enough for Snow to threaten Ursula to take her heart and crush it if the word gets out and it reach Emma? Is Cruella involved as well? What does the Charmings have against the Queens of Darkness?

One of the things that stood out oddly to us is that we don’t know when does the flashback that we’ve seen is happening, timeline-wise. How does Maleficent end up with the curse? Still, we’re excited to see more about the dark curse again because it’s goes back to the roots of how the show started. It’s nice learning more about how the dark curse start, how Rumple got the curse, but the really good question remains, who wrote it?

So, we were wrong. Turns out, the Sorcerer and the author are two different people. The Sorcerer might even be dark, someone that the Blue Fairy seemed afraid of. The author, however, is someone we are still in the dark of; Blue Fairy also don’t know who it is yet.

What kind of comedy will ensue from seeing Ursula and Cruella trying to act repentant, trying to make friends, which they are a little bit failing to achieve as of this moment. Why didn’t Regina get the scroll back before Cruella and Ursula drive away?

Chernabog, by the way, was from Fantasia. They’ve already pulled some elements from Fantasia, and it’s neat to see them bring in more characters from the movie. The Chernabog, however, we think it’s going to be more a menace than what we have seen from Fantasia. They are so careful about the technical specification that it seems like they’re leaving it open, that it may not really be seeking out the heart with the greatest darkness, but the one with most potential for darkness which, in this case, is Emma. What if the author rewrites the book and make Emma the villain?

Something else about this episode that we learned is knowing that Maleficent is not fully dead; she is still in Storybrooke. If the Blue Fairy and the others got out of the hat, what happened to the Sorcerer’s Apprentice?

It was also nice to get another reference to Lost when we heard that voice over Mr. Cluck’s drive-through, which sounded familiar. We’re about 99% sure it is Hurley’s Mr. Cluck’s Chicken Shack, and we’re probably guessing here but we think it could be Lynda Love’s voice that they used at the drive through.

It’s great to have the show back because we have a lot of theorize about! What do you think about tonight’s episode? What do you think happened between Snow White and the Queens of Darkness? Send us your thoughts and theories by sending us an email, writing on the comment section below, give us a call or head over the forum and join us this coming Wednesday for our full discussion of Darkness on the Edge of Town.