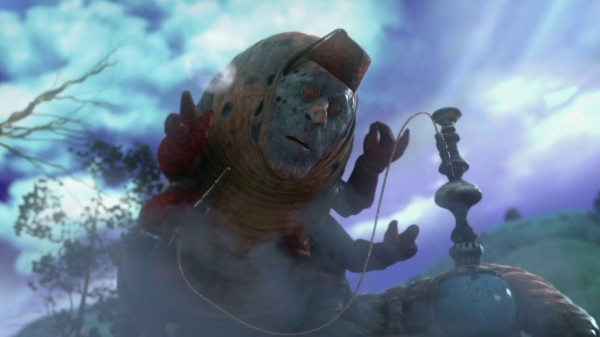 Alice in Wonderland has finally arrived and we’ve a got load-full of things to talk about. Check out what we’ve discussed about the Once Upon a Time in Wonderland pilot episode entitled, Down the Rabbit Hole as you listen to the podcast.

The Beginning of The End

As the show opens, however, the community has been very observant about young Alice’s tea set that looks like it has been grown over as if it had been left for a while. Along with the set lays a few stuffed animals, one of which looks a lot like the stuffed rabbit that Jefferson made for his daughter, Grace. 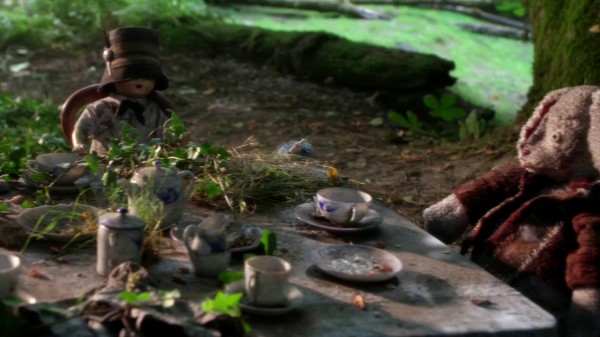 After little Alice’s first adventure in Wonderland, Alice came running back to her father from the rabbit hole, who thought she was dead because he said that she was gone for a long time. While she was happy to be home and ready to tell her father of the fun-but-terrifying adventures she had in Wonderland, little Alice felt a bit disheartened when she found out that her father thought she made it all up, making Alice want to go back to Wonderland to search for proof.

It was nice to meet The Knave of Hearts in Storybrooke, Maine. In the episode, the Storybrooke library is still closed but the sign says “opening soon.” On the other hand, Emma’s yellow bug was seen even though it wasn’t clear who was driving it. Adam Horowitz once said that the story happened pretty much around the time as when Once Upon a Time is going on, after the curse was broken.

Two characters from Once Upon a Time were also seen in the pilot episode – Ashley and Leroy. In the episode, Ashley was no longer pregnant but was seen with a baby-sized sneaker keychain, indicating of her newborn baby. Leroy, on the other hand, regarded to The Knave of Hearts as “Brother.” After their short run-in with The Knave of Hearts, it’s interesting how (and if) they are going to cross the scene with Once Upon a Time, since Granny’s diner had been trashed after The White Rabbit’s hole has been opened. We never saw a hole in Granny’s Diner, so is it going to even be explained in Once Upon a Time?

It was also interesting what The White Rabbit said to The Knave of Hearts in Granny’s Diner before they went to the asylum and help Alice. Is he part of The Red Queen’s plan? What does The White Rabbit mean when he said “She needs you”?

Set in London, England, Alice was kept in the Bethlem Asylum for a year. In a scene, the asylum’s gate was seen with Roman numerals MDCCCLXVII (meaning 1867). Edward Kitsis and Adam Horowitz said that the story takes place in fictional (Victorian) England but if that’s the case, how does it tie in with present day Storybrooke?

Kitsis and Horowitz also mentioned that this is not the same England as Baelfire went into in Second Star to the Right, but why the need to address this fact?

While the curse is still in place, it was said that Alice has been traveling between worlds with the help of Cyrus. But if the only way one can travel is with magic, could magic work that easily and so predictably outside Storybrooke?

If Alice’s father said that she was gone for a long time, has she aged at all while she’s been in Wonderland? Why does Will have to remind Alice that she knows and remember him, to which Alice replied, “I don’t want to remember, I want to forget.” Why would The Knave of Hearts think that Alice would not remember him? Was Alice also affected by the curse?

Aside from traveling between worlds, it was also mentioned that she was fighting with pirates and swimming with the mermaids. Has Alice been to Neverland and has crossed paths with Hook and Ariel, as well?

When Alice escaped The Asylum with Will, how did Alice learn how to fight and kick butts? And before Will and Alice went outside, the doctor saw The White Rabbit. Are we going to see more of him and his reaction to the rabbit?

Before Alice was put into Asylum, Alice’s doctor said that she has had multiple disappearances over time and had The White Rabbit as proof to her father that she was not lying. During Alice and Cyrus’s first interaction, Alice handed out The White Rabbit from her bag, to which Cyrus regarded to Alice’s proof as “a talking white rabbit in a jacket and trousers.”

Cyrus’s bottle is in quite a decorative bottle, making it not quite like the typical genie lamp.

Cyrus said that he was tethered to the bottle for 100 years, slave to faulty dreams of man, and is always wishing for freedom.At the same time,  Alice was shown with three wishes, so how did Alice set Cyrus free?

The Red Queen asked to “borrow” Cyrus then pushed him off the edge after a while. What’s up with that?

Cyrus’s necklace started glowing when Alice said yes to his proposal. Is that Cyrus’s second wish? For Alice to say yes to his proposal? On the other hand, The Knave of Hearts agreed to help Alice in return of one wish. However, in Once Upon a Time’s “The Fruit of the Poisonous Tree” episode, the wishes were green when available, then turns red when used. They may have not have the similar rules but is that an indication that Alice’s wish have already been used? While The Knave of Hearts mentioned,  “One has to be careful what they wish for, make it consequence-proof”, how does this tie in with a genie’s limitation to wishes and its magic?

Both Will and Alice left Wonderland in bad terms. What did Will do aside from the fact that he was the thieving type? Alice mentioned that she helped him get his heart back, could The Queen of Hearts/Cora have something to do with The Knave of Hearts’s heart?

Cyrus’s necklace glowed when Alice found it in The Mad Hatter’s heart. Could Cyrus be closer than they thought he was? Cyrus did mention that it will glow when they are close to each other.

From “Alice the Chess Pawn” in our forums:

We were talking in chat and I was trying to recall the stories of Alice in Wonderland and the sequel Through the Looking Glass.  Disney has really mixed up the two stories and most people don’t know the true versions unless you’ve read the books.  Essentially, Alice in Wonderland is all about a game of cards and Through the Looking Glass is a large game of chess.  Surprisingly, the only characters that are in both stories is Alice and a vague and usually missed reference to the Hatter and the Hare.  Otherwise, it’s a completely different story.

Now that I know how to play chess Through the Looking Glass makes much more sense.  Alice goes through the mirror and ends up meeting the Red Queen, who starts her out on a journey to become a Queen, herself.  Anyone who plays chess knows that if your pawn reaches the last row it becomes a Queen.  So Alice, the pawn, goes off on her journey and “plays” the game.  In the end, she reaches the end of the field with the sleeping Red King, knocks over the Red Queen and wins the game.  Then she wakes up.

The point of that little retelling is do you thing Wonderland will take a bit of this story and incorporate it into the tale.  Maybe the Red Queen sets Alice off on this wild journey across lands (i.e. the chessboard) in order to get Cyrus back.  She has to “play the game” in order to be reunited with her lover.

Is it possible that The Red Queen was talking more about strategy when she told The White Rabbit that they are still setting up the game?

Now what if those main characters correspond to pieces on a board, like so:

Alice = pawn (she is a pawn in Looking Glass) (also, it’s a metaphor)
Cyrus = I’m going to call him the White King. And he is being held by the opposite side
The Red Queen = The Red Queen. Obviously
Jafar = The Red King. I don’t know if this implies romance between RQ and Jafar but it does imply that he he is out to stop Cyrus and Alice from taking him, because in chess you win once you’ve checkmated the opposite side.
The Knave = Bishop.
The White Rabbit = The Knight. Now, the reason I’m putting knight for WR are this: one, animal motif. Two, have you ever seen a rabbit move? It’s somewhat erratic. The knight (horse) moves really oddly on the board, it can only move two up and one over or some combo there of. The WR is also the one who opens portals (moves strangly). Maybe a stretch but I’m going to go with it for now.

Jafar mentioned that they need the bottle and Alice to make her use her wishes. What will they make Alice use her wishes on? The Red Queen told Jafar that she’s the only one who knows exactly where Alice is so their deal still stands. What is The Red Queen and Jafar’s deal?

On the other hand, kfchimera pointed out that Jafar’s snake staff looks similar to Disney’s Aladdin.

The eyes of the staff glowed like the wish rubies or whatever they are. He probably needs the the rubies to sustain his magic. And like Alice said, u can’t steal wishes. He needs to get them willingly.

In the sequel to Aladdin, Jafar wished to become an all-powerful genie. I think it’s possible that though he is a sorcerer now, his powers have their limits. Hence, why Jafar wants the wishes that Cyrus granted Alice. Maybe he’ll make a deal with Alice: she gives him her wishes in exchange for Cyrus. He doesn’t currently know where Alice is and couldn’t get to her, which is why the Red Queen said Jafar needed her alive.

More on The Knave of Heart