Thanks to Sydney Glass, we learned in “Desperate Souls” that Henry was born behind bars. We already knew that Emma gave birth when she was 18 (“The Price of Gold“), but she was first sent there on June 16, 1996.

In “Desperate Souls,” Emma met a discouraged Henry in Granny’s diner and took the newspaper from him. The following screenshot is quite easy to read. 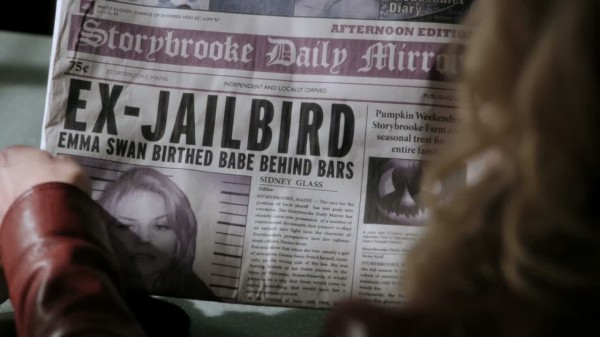 Storybrooke, Maine—The race for the position of local sheriff has just gone into overdrive. The Storybrooke Daily Mirror has recently come into possession of a number of controversial documents that purport to shed an entirely new light onto the character of Storybrooke’s prospective new law enforcement official, Emma Swan.

Records show that when she was merely a girl of seventeen, Emma Swan found herself, ironically, on the wrong side of the law. She was visiting friends of her foster parents in the town of Worcester, Massachusetts, it would prove to be a trip that would earn her a juvenile criminal record.

But here’s the big unknown: what did Emma do that landed her in jail and was later sealed?

If you’re about to watch the live ninth episode on TV, please keep our feedback information handy to send us your thoughts, easter eggs you catch, and theories!