We really liked this episode because it told just the right amount of story, even though it didn’t have as much action as previous episodes.

Consider the Once Upon a Time timeline, this must have taken place 50–70 years or more before the curse.

Rumpelstiltskin started as a normal human. Will other characters—like the Big Bad Wolf, three little pigs, pongo, and others—also start our in fairytale land as humans? We’ve also seen Jiminy Cricket start as a human. 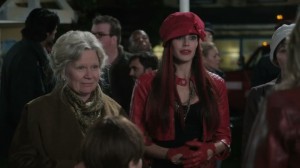 The opening recap is different in this episode. This time, it takes clips from the last seven episodes, so it helps introduce more of the story.

“Only one knows the truth and she’ll stop at nothing until someone breaks her spell.”

What will happen once The Evil Queen’s spell is stopped?

The title screen shows The Dark One. 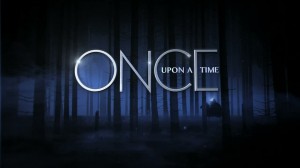 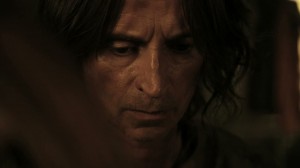 This is even longer before Jiminy comes to Rumpelstiltskin in “That Still Small Voice.”

Rumpelstiltskin started kind of good, albeit cowardly. Later, the power consumed him.

The Dark One is played by Brad Dourif who also played Wormtongue from Lord of the Rings.

The distant sky is red from the Orge Wars. Will we learn more about this? Is this war where Rumpelstiltskin got the limp-causing injury? 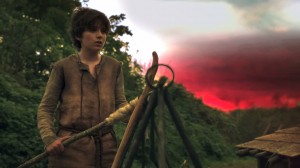 At first, we thought of Robin Hood when seeing the old beggar in the forest, but we were later proven wrong.

ABC is pulling from multiple sources for their tellings of these tales: Grimm fairy tales, the traditional Once Upon a Time stories, and even Disney’s movies (Disney owns ABC).

Do the soldiers have a calendar of everyone’s fourteenth birthday? Perhaps the Dark One knows. We know Rumpelstiltskin can see the future (Pilot) and maybe the Dark One could, too.

The commanding soldier had Rumpelstiltskin kiss his boot to release him from the penalty of using the king’s road.

Rumpelstiltskin’s son, Baelfire, was willing to obey the law and go to war, but his cowardly father wouldn’t allow it.

Might Rumpelstiltskin have acquired the wand (in “The Cost of Gold”) to try to free himself from his own curse?

How did the duke get control of Zoso’s dagger? Might this be the origin of having power over someone by knowing their name? 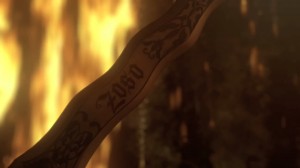 Might the dagger be in Mr. Gold’s shop, or maybe buried in the woods (“The Heart Is a Lonely Hunter”).

Check out the flags on the duke’s castle. They’re the same emblems as Prince Charming’s castle later (James probably wasn’t even born yet). 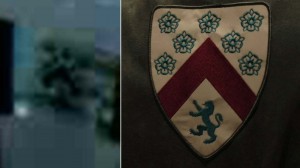 Although the castles aren’t structured the same. Former castle, maybe? 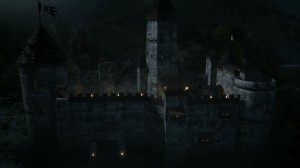 The dagger was in a room with some interesting flags. 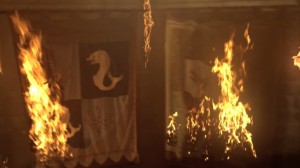 “Magic always comes with a price. Now it’s yours to pay. … I can always recognize a desperate soul.”

Mr. Gold wants Emma to be Sheriff so that she is more capable of giving him the favor she owes him (“The Cost of Gold”).

Is the big guy in the blue suit the ogre from The Evil Queen’s group that helped enact the curse? 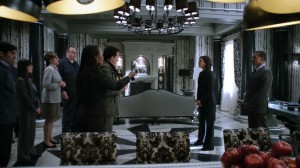 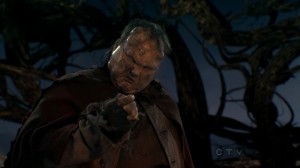 Mr. Gold had a spindle in the back room of his shop, but it’s not the same one from Fairytale Land.

Mr. Gold showed some deep emotions when he gave the walkies to Emma for Henry. Maybe he saw his son die in Fairytale Land?

Will we someday see the Evil Queen’s origin?

Dr. Hopper tried to make a joke before the debate, but it fell flat and he said, “Wow. Crickets.”

Sydney Glass was really happy looking at himself in the mirror. The world “reflection” is used several times in describing Sydney Glass.

The sheriff’s autopsy revealed that he died “of natural causes.” Maybe “lack of heart”?

An interesting story written by Sydney Glass in the newspaper reveals a little information about Emma’s juvenile criminal record.

Storybrooke, Maine—The race for the position of local sheriff has just gone into overdrive. The Storybrooke Daily Mirror has recently come into possession of a number of controversial documents that purport to shed an entirely new light onto the character of Storybrooke’s prospective new law enforcement official, Emma Swan.

records show that when she was merely a girl of seventeen, Emma Swan found herself, ironically, on the wrong side of the law. She was visiting friends of her foster parents in the town of Worcester, Massachusetts, it would prove to be a trip that would earn her a juvenile criminal record.

Emma wants “to show him [Henry] that a hero can win. And if I’m not a hero and I’m not the savior, then what part do I have in his life?”

Dr. Hopper reminded everyone to “vote your conscience.”

Yeah, tell’em about it,
hit’em where it hurts
Hey, Kool Thing, come here, sit down
There’s something I gotta ask you.
I just wanna know, what are you gonna do for me?
I mean, are you gonna liberate us girls
From male white corporate oppression?
Tell it like it is!
Huh?
Yeah!
Don’t be shy
Word up!
Fear of a female planet?
Fear of a female planet?
Fear, baby!
I just want to know that we can still be friends
Come on, come on, come on, come on let everybody know
Kool, kool thing
Kool, kool thing

Will we someday see Storybrooke being created immediately after the curse is enacted?

The phrase, “as long as we/anyone/I can remember” was used several times in this and past episodes.

The Graham’s last name was Humbert? He was also called “compassionate” in a newspaper clipping from the box that Mr. Gold had.

David is now working at the animal shelter, funny considering that he was a Shepherd in Fairytale Land.

From Tanesha (who contributed to our Once Upon a Time timeline):

After watching last night’s episode, I have a new theory concerning Rumpelstiltskin. Before the dark lord died he mentioned that his life was such a burden and that Rumpelstiltskin will see what he means as he now has the power. In previous episodes to this we’ve seen Rumpelstiltskin acquiring more power such as the Fairy Godmother’s wand. Maybe he’s trying to find a cure from this new burden he has acquired. It could even be what Mr. Gold was looking for in episode seven “The Heart is a Lonely Hunter.” Can’t wait to hear what you guys think.

Hello, as a U.K fan of “Once upon a Time” and following the series and this podcast avidly, I have a few questions, theories and thoughts

Keep up the good work!

Maybe what snow white took from the queen is being the most beautiful of them all?

Also another good show, though much darker, is Grimm.

From Sadie (who may not have realized that we’re not affiliated with ABC):

I’m not very happy with the fact that Graham was killed from the show. I wished that didn’t happen, I hope you take this message into consideration and try to get him back somehow, someway. I’ll be watching further shows and hoping he shows.

Thank you, everyone, for your great feedback! Remember to send your feedback to us each week before Thursday night so we can include in our episodes.

Next live podcast on January 19