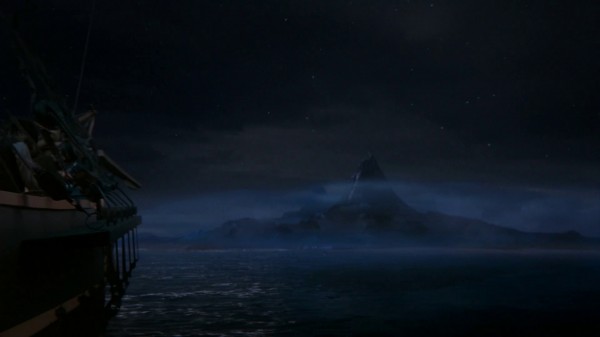 Did Rumplestiltskin test the curse? Was OUAT inspired by Peter Pan and the Starcatchers? Jenny mentions Hooked fan fiction. And we share news (and later spoilers) about Wonderland and the third season.

Not as many questions

The first season finale left us with many questions about which direction Once Upon a Time would go. But the second season finale seemed to give us a really good idea of where the story is going. So there doesn’t seem to be as much to discuss or theorize between seasons two and three.

Yes, those are flashbacks

Daniel, I am directly addressing you because it is you who has the problem with the term “flashback.” … the recent batch of episodes that I have listened to have featured you stating your disapproval of the word “flashback” because during season 1, the events from the Enchanted Forrest that we see are not remembered by the characters.

Well, I just wanted to correct you on that. I am an English major, and the literary term “flashback” refers to the writer showing his/her audience a time prior to the present time. Although this usually is recounted by the character(s) via a memory, dream, story being told to (an)other character(s), etc., this is not always the case, and the event does not necessarily need to be experienced by the character in the present via memory. It could be for the sole purpose of informing the audience of past events.

The point is that the events of the Enchanted Forrest happened before the events of Storybrooke, which means that they technically are flashbacks. Besides, in season 1, past events that involved Regina or Rumple obviously were remembered by the characters because they remembered who they were. Plus, the way I see it is that Mary Margaret, David, Ruby, etc. have always been their Enchanted Fairytale counterparts; they just didn’t know it.

Has Rumplestiltskin been in Neverland?

Check out the Once Upon a Time convention and see what cast members are already coming!

Peter Pan and the Starcatchers

It seems that [Adam Horowitz and Edward Kitsis] may be taking elements from the series of prequels that were written [by Dave Barry & Ridley Pearson] for the Peter Pan story called the “Starcatcher” series. [“Peter and the Starcatchers” and the second book is called “Peter and the Shadow Thieves”. They are best-selling children’s novels published by Hyperion Books, a subsidiary of Disney, in 2004.].

Over the hiatus between season 1 and season 2 I got to enjoy reading a really great Once Upon A Time themed fan fiction. I was informed by one of the authors that the detailed outline for this story was completed before season 2 even began. So nothing that has occurred in season 2 has influenced this story.

“Hooked” is a collaborative fanfiction novel written by NarrowBridge and Warrior717.

An Alternate Universe story set in Neverland that picks up right after the Season 1 Finale, “Hooked” sweeps its readers off their feet in a whirlwind of swashbuckling pirates, mischief-making Lost Boys, and the timeless battle between good and evil. In this memorable tale of love, romance, tragedy, and sacrifice, one can expect only the unexpected. Follow Belle and Rumplestiltskin as they set out on an epic quest to find his son in a land that will challenge them in ways even the most gifted seers cannot foretell. The infamous Dark One will be forced to make the most important, and most costly, deal of his life. Will he choose love, or power?

“Hooked” won third place in the Once Upon a Fans multi-chapter fan fiction content. See all the winners.

3×01 was written by Eddy and Adam, so we expect this to be an epic episode to kick off the third season.

3×02 was written by Chambliss and Vazquez, who also wrote “Selfless, Brave, and True.” We’re expecting a slower episode that will move the story along with some unexpected details or character development.

ABC ordered more episodes than the original short-run. Could this lead to other short-run series in different worlds?

I was just reading that the creators of the show (whose names are just too exhausting for me to type..ever v_v) were saying that OUAT in Wonderland was orignally intended to be a short hiatus fill-in during the winter but now thats changed and in the future they could tell entirely new stories should it be picked up for a second season. So could that mean that in the future we could possibly see maybe “Once Upon A Time In Oz or Once Upon A Time In Narnia OR Once Upon A Time in Atlantica, maybe? It’d be cool if for every season we got a different story set in a different world….

thewatcher in our Once Upon a Time and Wonderland forums