I hate spoilers, but I sometimes like teasers (okay, so they’re minor spoilers) such as upcoming actors, characters, or even an episode’s area of focus.

First, some news (no spoilers): while a new episode will air this Sunday, January 29, there will be no new episode on February 5, most likely due to that being Superbowl Sunday. Once Upon a Time will return the following week on February 12. We can likely expect some interesting things to happen for February Sweeps.

Now on to some of those teasers. I actually prefer to know about upcoming characters without knowing in which episodes they’ll appear, but as it happens I do now know who will be in which episode. So, ahem, SPOILER WARNING: if you’re the type who won’t read an episode description or watch a commercial before an episode airs, stop reading now. 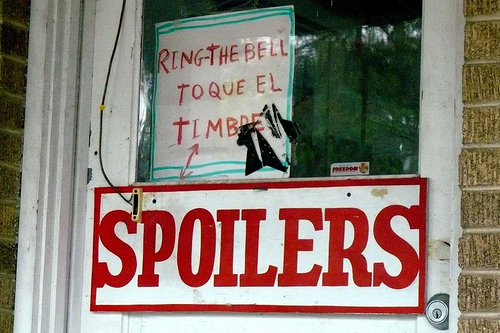 January 29: “Fruit of the Poisonous Tree”

“Fruit of the Poisonous Tree” was written by Ian Goldberg and Andrew Chambliss, who brought us episode 6, “The Shepherd.”

Now for the episode description from TV.com; don’t read it if you don’t want to know where the story is going.

While Sydney seeks out Emma’s help against Regina, Mary Margaret and David continue to meet clandestinely. Meanwhile, in the fairytale world, Snow’s father King Leopold receives three wishes from a Genie, who warns him to be careful what he wishes for.

So it looks like Sydney will gain some depth this week. As I said in the podcast, this whole thing with Mary Margaret and David would make me uncomfortable if not for the fact that David and Kathryn aren’t really married; their memories are false, created by the curse. David is, on the other hand, technically married to MM.

This episode will feature Belle (played by Emilie de Ravine of Lost!), Gaston, Cinderella and/or Ashley, Thomas and/or Sean, and various other interesting-sounding characters (including a guy playing The Dove). Notably missing from the list is Beast, unless they’re calling him by name. Very much looking forward to seeing Emilie de Ravine again, and seeing whether Belle ends up sounding Australian, French, English, or American. (Lost-related tangent warning: I wonder if Belle will have a child, and if Rumpelstiltskin will take this child, and if Belle will end up screaming “my baby!”)

Jane Espenson wrote this episode. She also wrote “That Still Small Voice” and “Desperate Souls,” as well as the as-yet-unlisted episode 15. Espenson’s writing history is varied, though her production filmography is perhaps more impressive. She’s worked as a consulting producer on most of Once as well.

As Valentine’s Day arrive [sic], Mary Margaret plans a night out with Ruby and Ashley. Meanwhile, Belle makes a deal and Gold plans vengeance on the thief who robbed him.

From the description, this episode could be either really good or really annoying. Could be both, with two shorelines happening.

February 19: “Whatever Happened to Frederick”

We’ll see Granny, Red and/or Ruby, and both Abigail and Kathryn, however additional info on this episode is still a bit limited.

David tells Kathryn about his true feelings. In the fairytale world, Prince Charming offers to help Abigail while looking for Snow.

Nice to see that we don’t have to wait very long to continue moving along the story of Snow White/Mary Margaret and James/David, one of the primary stories of the series. The episode description doesn’t provide many clues as to the meaning of the title, so if you’re not excited to be revisiting our transdimensional love triangle, I expect this episode will have something more to offer as well.

Use the buttons above or easily retweet with this.