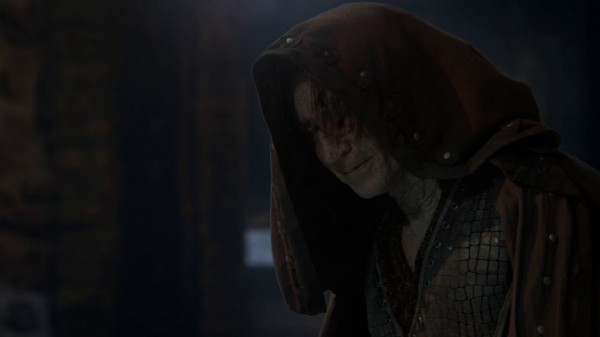 Rumplestiltskin/Mr. Gold struggles with the courage to be honest. Captain Killian “Hook” Jones has a vengeful alliance in hand.

Drawings of distant places in Rumple and Milah’s place 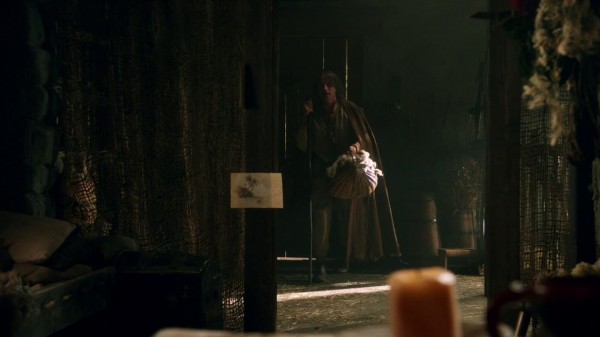 Hi Guys, Great podcast. … could Rumple’s wife Meela actually be Ludmila? Ludmila is in a Russian fairy tale. So when you guys had brought up a point that Rumple had “touched” 3 other fairy tales [besides his own] maybe he actually touched 4. Anyway love the podcast. Thanks, Josh

Was that the Frog Princess, Tianna, in the bar?

Milah wants to start over, see the whole world

Pirates give Rumplestiltskin a rusty sword to fight. The same rusty sword The Dark One later gives Captain Killian Jones.

Hook: “A man unwilling to fight for what he wants deserves what he gets #audio”

As soon as we saw Smee’s red cap, we knew it was Smee

We may not see Peter Pan (perhaps this was the workaround to copyrights).

Hey guys – look forward to the podcasts every Sunday and Wednesday so keep ‘me coming!

In the forums earlier this week I predicted that Rumple would be the one to both cut off Hooks hand and also keep it, taking the place of not one but TWO characters from Hooks story: The Crocodile AND Peter Pan! In the story, Hook is vengeful against Peter because of the act of cutting off his hand and feeding it to the crocodile.

I also predicted that because of this, we wouldn’t be seeing Peter Pan. Which was also correct- for now …

Keep it all up!

Smee told Rumplestiltskin that the beans cames from a far off land. Perhaps Jack?

I’ve been thinking about Beaman (aka William Smee), who makes a profession of acquiring precious items for other people. We know that he either traveled by ship to other lands or had connections with sailors who did. Where exactly did he get the magical bean and from whom? The Blue Fairy said in “The Return” that the beans had been stolen from the EF, except for the one she gave Baelfire. Well, I think that the person who stole the beans from the EF and the person from whom Beaman/Smee got the magical bean is one and the same person. Also, I think that person could be Jack from the “Jack and the Beanstalk” fairytale.

Thanks for the great podcast!

Only the dark one has eternal life. But Smee agrees to be spun back to a boy, will that still happen?

Rumplestiltskin didn’t realize the power of true love before this. Milah truly loves Hook, but she doesn’t know about Baelfire’s disappearance

Rumplestiltskin blames @Milah for letting Baelfire go, yelling at her is like yelling at himself (Kitsis and Horowitz mentioned this in the official podcast)

Grumpy: “Nothing in this shop belongs to you”

Rumplestiltskin learns about honesty and courage

Ruby is delivering food in a basket!

Rumplestiltskin asks dating advice from Charming. “Honesty” is the answer

Rumplestiltskin didn’t seem to know about Ruby’s smelling. Evidence that he didn’t write the book?

I was just re-watching Once, and something caught my attention. I think it’s been discussed that when Ruby talked about her “wolf senses” coming back, Rumple didn’t really seem to know that she was a wolf. Besides the obvious question, will we see Ruby become a wolf in Storybrooke, I thought: this really helps us narrow down one of our main, reoccurring questions- who wrote the story book?

Knowing who wrote the book is one of the major plot points that I think could really affect the story. I mean, whoever wrote the book obviously had a reason to write it, may have foreseen what would happen, and will probably have the upper hand if they’re scheming something big we don’t know about.

This is why so many people thought the writer was Rumple- he knows, well, everything, and it would help him make sure the curse was broken.

But Red’s story was in the book, and if Rumple didn’t know about it… he couldn’t have written the book.

Personally, I think it all leads back to the Blue Fairy; the book is like an encyclopedia of FTL, and who better to write it than the oldest magical creature in existence?
What do you guys think?

I also wanted to let you guys know I started a thread for Jenny about Dr. Whale being the Gingerbread Man, and it’s actually gotten some pretty good (ridiculous) support/theories from people, so it’s official! 😀

Ok, I think I’ve done most of my theorizing for now… I’m going to go finish the episode XP
Thank you soooooooooo much for the amazing podcast! I can’t wait for it later!
~ Clockwatcher
OR, because Jeremy likes names, Lauren 🙂

Do you see any interesting book titles?

Rumplestiltskin quotes Sir John Lubbock: “We may sit in our library and yet be in all quarters of the earth.” from The Pleasures of Life:

Not only does a library contain “infinite riches in a little room,” [3] but we may sit at home and yet be in all quarters of the earth. We may travel round the world with Captain Cook or Darwin, with Kingsley or Ruskin, who will show us much more perhaps than ever we should see for ourselves. The world itself has no limits for us; Humboldt and Herschel will carry us far away to the mysterious nebulae, beyond the sun and even the stars: time has no more bounds than space; history stretches out behind us, and geology will carry us back for millions of years before the creation of man, even to the origin of the material Universe itself. Nor are we limited to one plane of thought. Aristotle and Plato will transport us into a sphere none the less delightful because we cannot appreciate it without some training.

Comfort and consolation, refreshment and happiness, may indeed be found in his library by any one “who shall bring the golden key that unlocks its silent door.” A library is true fairyland, a very palace of delight, a haven of repose from the storms and troubles of the world. Rich and poor can enjoy it equally, for here, at least, wealth gives no advantage. We may make a library, if we do but rightly use it, a true paradise on earth, a garden of Eden without its one drawback; for all is open to us, including, and especially, the fruit of the Tree of Knowledge, for which we are told that our first mother sacrificed all the Pleasures of Paradise. Here we may read the most important histories, the most exciting volumes of travels and adventures, the most interesting stories, the most beautiful poems; we may meet the most eminent statesmen, poets, and philosophers, benefit by the ideas of the greatest thinkers, and enjoy the grandest creations of human genius.

There’s a sign in the library advertising spanish lessons

I’m fairly certain that this new curse isn’t one that was cast, but is a consequence of Gold’s bringing magic to our world, a place where it was never supposed to belong. Gold seemed to imply as much during his talk with Belle in the library. When Belle said that Gold brought back magic rather than starting right off to look for Bae, Gold says to her that he’s a coward, that magic is a crutch he doesn’t know how to walk without and that he now knows that he can never leave this place. That makes it sound like all 3 of those thing are connected. Building on that, right after he said that Belle pieces together why Gold can never leave (because if he left to look for him, he would no longer know his son) and Gold’s response was “magic comes with a price.”

It doesn’t sound at all like Gold believes that this new curse is something someone else put in place, and I think he’s likely right. It makes sense, since all series long the cost of magic has been a major theme. It seems inevitable that the price would catch up to Rumple/Gold at some point. He may have had other people do his work for him in enacting the curse, but it was still his magic. I don’t think it’s any accident that the new curse affected the town in a way that hurt him the most.

The Library is a portal between worlds? Maybe the books are connections like in the game Myst.

Gold tied up Smee with gold cord. Does his still have his vengeful and selfish side, or just being defensive and worried about Hook? Rumplestiltskin also has his potion collection again.

When the curse hit, it didn’t take Hook. Rumplestiltskin didn’t know where Hook is

I watched The Crocodile the other night. Awesome rumbelle episode and I hope we get more rumbelle centric Once episodes in the future. I had a thought about the boundary new curse around Storybrooke. We’ve heard and seen in the past all it takes to break a curse is True Love’s kiss. That’s how the memory curse was broken in the finale. Fairy dust may help but I think the way to break the boundary curse might be through True Love’s kiss. Probably not from Emma and Henry because that would be too repetitive but Rumpel and Belle.

I think a major part of True Love’s kiss is that you have to truly love and accept the other person for who they really are. I know Belle doesn’t like Rumpel using magic since she referred to it as a crutch but if Belle truly loved him, she would love all parts of Rumpel.

Just a thought. Can’t wait to listen to the podcast.

Cora calls him “Hook” as if a nickname

What if Cora and Hook arrive in Storybrooke before Snow and Emma?

Please rate and especially write a review for us in iTunes. It really encourages and helps us!

Listen to these "The Crocodile" theories in this #OnceUponaTime podcast! http://t.co/xOGly3lx