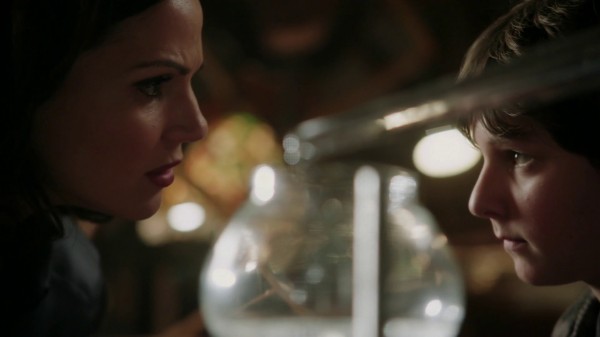 Once Upon a Time‘s second season is quite a bit more cryptic in its episode titles, causing us to think deeper to find the connection.

This episode was very different from previous episodes because the parallel stories tie into each other. So we didn’t segregate our conversation as much.

Hook stole the protective counter spell from Cora. Since he later learned how to take a heart (Aurora’s), has he been learning other magic, too? He has been around for about as long as Rumplestiltskin has (about 300 years).

Speaking of age, how old is Cora? She was the Miller’s daughter, but we never saw how she looked when Henry Sr. married her.

What worlds did Cora cross and when? If she’s the Queen of Hearts, could she have infused magic into one of Jefferson’s hats (or several) that took her from world to world?

Why did Hook challenge Cora to “try” to kill him? Is there more to this? Maybe something that prevents it, like Jacob from Lost? Cora expected she and Hook would climb the beanstalk together.

Cora had a traveling chest for heart boxes. They looked the same as in “The Doctor,” but not the same as the vault in Wonderland from “Hat Trick.” 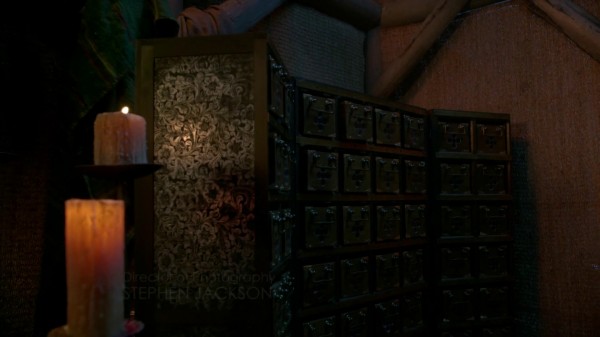 Cora collects hearts even if they’re dead. It’s as if she’s the queen of hearts! Cora blew on the non-glowing heart and it caused several others to star glowing. This seemed like a temporary “breath of life” to dead hearts, raising a small army of the undead. 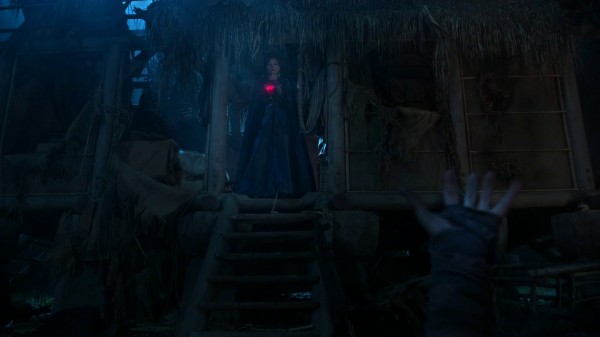 Mr. Gold has a complicated relationship with Granny, many people, and even ketchup! 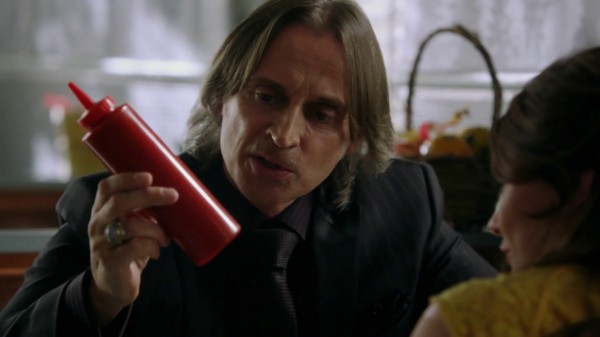 What was the previous battle that involved Cora against Regina and Rumplestiltskin? This seems like it would’ve happened before the curse was pronounced and after Snow was on the run.

The nightmare was burning Aurora because she was holding on to the dream. Maybe it was burning Henry because he’s a kid and his mind isn’t strong enough.

“Into the Deep” includes—we think—the first time we hear the phrase, “Once Upon a Time” in the TV show.

Why so much trouble to point out that it was the ink, not the quill, that imprisoned Rumplestiltskin? In “The Price of Gold,” Grumpy said that the Blue Fairy had cast a spell on the quill.

We think the ink is irrelevant and maybe even nonexistent. Maybe it’s just a trap for Cora, if Mr. Gold perceives that Cora will find out and go to Rumple’s jail cell first.

The ink comes from the “rarest species of squid” that comes from the “bottom of a bottomless ocean,” reachable only by a mermaid or Rumplestiltskin. This could be another Little Mermaid reference on several points.

Just thought I’d mention that Ursala also gets Ariel to sign a contract with a quill (well kind of a fish skeleton thing) in Disney’s Little Mermaid. I think this supports the theory that the squid the ink comes from may be referring to Ursala. I’m wondering if you guys think there might be something there? Thanks for the awesome podcast, you guys help me get through the entire week I have to wait between episodes.

Mulan was smart and cut off the head of an undead to kill it. 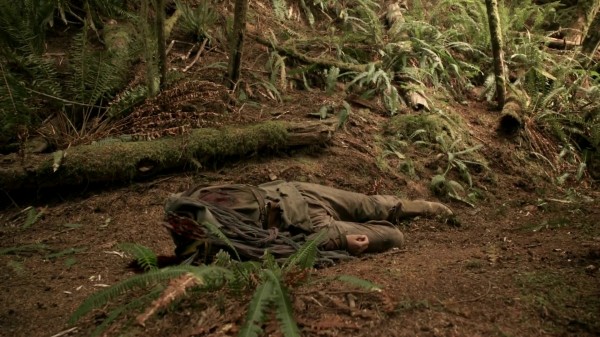 Aurora is getting gutsy! Cora called her “Plucky” several times because of this.

I know Cora’s been stated to be the Miller’s daughter and that many people believe that Cora herself is the queen of hearts but I believe she may represent yet another character (such as how Rumpelstiltskin is a composite of many characters).

If you’ve ever seen any of the Hayao Miyazaki films, you may have seen a movie known as “Howl’s Moving Castle” which is actually based on a piece of literature. Maybe it’s a minute detail, but I couldn’t help but notice Cora’s use of the word “plucky” when speaking to Aurora. It was very similar to how the Witch of the Waste addressed Sophie (the story’s protagonist) with the same use of the word. On top of it, the witch seeks to take Howl’s heart both physically and metaphorically, so like Cora, she has an obsession with hearts. It’s a small similarity, but I thought it would be interesting to mention. The film is dubbed and released by Disney, so it is entirely possible that this theory could hold true.

Keep up with the great Podcast!

* If you want any info on the Witch of the Waste, you can go here: http://en.wikipedia.org/wiki/Howl’s_Moving_Castlehttp://howlscastle.wikia.com/wiki/Witch_of_the_Waste

We think Cora is partially lying about where Philip’s soul went. But we’ve always believed that Philip was still alive. This planted that idea in Aurora’s mind, so we’ll probably see her try to “find” Philip.

Was Aurora actually hoping to go to Storybrooke?

Was Cora’s locket necklace anything special? 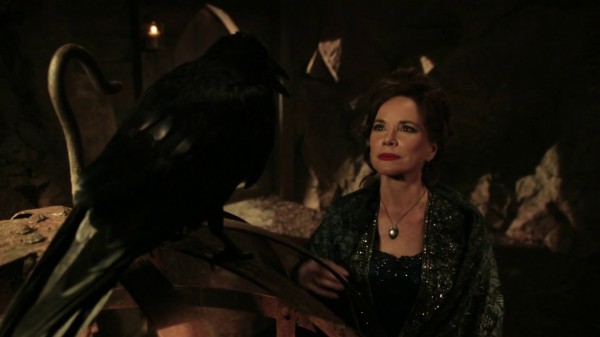 The one poppy that Mulan found on the edge of the Woods of the Dead glowed. 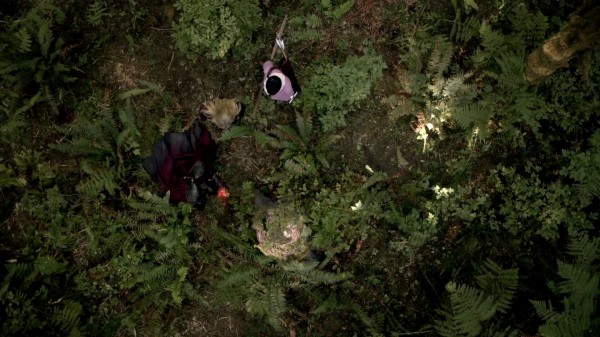 We couldn’t find any specific references to “Woods of the Dead” other than from role-playing games (RPG).

We felt it was a little too convenient and maybe even “forced” that Snow and Charming ended up in the nightmare. Chris from New York called in to agree.

Mark Isham did a beautiful job with the emotional music in “Into the Deep.” We look forward to the second-season soundtrack!

When David found the red room, he broke the locket and it was broken in Storybrooke, too. 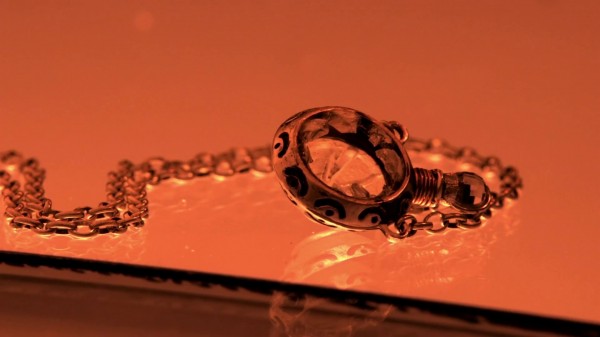 The necklace inside the nightmare. 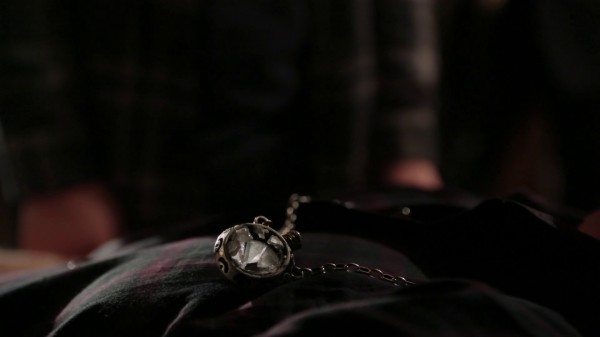 The necklace back in Storybrooke

Kitsis and Horowitz explained in the official podcast that the locket was starting to crack the more it was used.

Regina seemed to believe that Cora could actually be more powerful than Rumplestiltskin. Will Regina turn back to magic when Cora comes to Storybrooke?

Mulan is protecting Aurora because it’s the “last bit of Philip” she has left. This could still be a hint that Aurora had feelings for Philip.

Where is Hook’s true allegiance? He’s certainly working for himself.

Snow might have been detecting Cora vibes coming through Aurora. 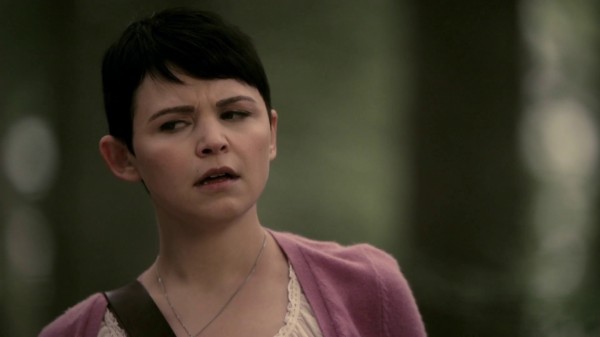 How is David going to be woken up? Why did the spindle have to be spinning for the sleeping curse to transfer? “It’s magic, not science.” As Galloway said.

We love that Once Upon a Time keeps answering questions while raising more of them.

Big thanks to Bill and Anne Marie from Greetings from Storybrooke for helping support voting for us in the Podcast Awards! We’ll learn the results at the awards ceremony at New Media Expo in Las Vegas on January 7.

Vote for Once Upon a Time in the People’s Choice awards!

What if Henry turns evil or gets into magic?

Hey, guys, love the podcast! I just wanted to send in a couple thoughts I had about tonight’s episode.

First of all, there was some interesting stuff going on in this episode involving Henry and magic. He seemed a little too fascinated with the whole process. For example, when he was looking at his arm after Rumple healed it, and when he was asking Regina all those questions as she was making the sleeping curse. It makes me think that at some point in the series, Henry will be faced with a choice of whether or not to use magic. Will he give in to the temptation of magical power, or will he take a step back, see what magic has done to Regina, Rumple, and others, and realize that magic should be avoided? It would be interesting to see something like that play out in the show.

Second, Hook took Aurora’s heart! Obviously I have a lot of questions about how he did it and whether or not she realizes she is being controlled, but there is also something else I’m wondering about. Up until now I had always assumed that after Emma and Snow return to Storybrooke, Aurora and Mulan will immediately begin the quest to bring back Phillip’s soul, but now I’m not so sure. It seems to me that they will have to find some way to get back Aurora’s heart before they even consider Phillip. Can a heart be returned once it’s been taken? If not, will Aurora have to live without a heart for the rest of her life?

Well, that’s all I’ve got and I’d love to hear your thoughts on this. Great job with the podcast!

You can sponsor ONCE podcast, too, or shop and save at Amazon.com to support ONCE podcast.