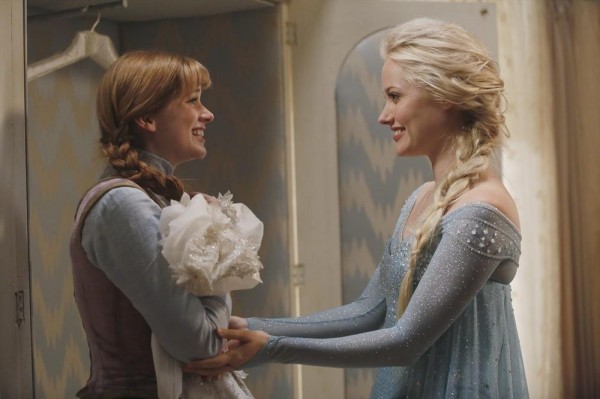 While all Oncers are “frozen” to their seats anticipating this Sunday’s fourth-season premiere of Once Upon a Time, we at ONCE podcast got the privilege of screening the episode, “A Tale of Two Sisters,” in advanced. We couldn’t let go of our excitement and had to give you a taste of what’s to come.

Without getting into too much detail, I will say not to expect a Once reinterpretation of the events from the Frozen feature film. Instead, Once Upon a Time is taking the same characters and their traits from the film, while incorporating them into the Once Upon a Time universe. We’ll also see events that take place after the movie.

Just from viewing the premiere, the Frozen cast are the most accurate to their animated Disney counterparts compared to any other character on the show. Elizabeth Lail and Georgina Haig are perfectly cast as the iconic sisters Anna and Elsa, respectively. Both actresses portray the same spirit as Disney voice actresses Kristen Bell and Idina Menzel. Anna is as energetic and optimistic as ever, while Elsa is still the concerned and over-worried older sister. Scott Michael Foster also makes an ideal casting decision as Kristoff, originally voiced by Jonathan Groff. Even Sven makes an appearance, and he steals the scene in which he is featured.

Picking up from OUAT’s third season

Meanwhile in present-day Storybrooke, we immediately begin where the Season 3 finale left off, with Elsa emerging from Zelena’s barn and venturing out into this strange new world. It remains to be seen how and why Elsa ended up in an urn and placed in Rumplestiltskin’s vault. One thing is for sure, the frightened Queen of Arendelle is out on a mission of her own. Once again, the town of Storybrooke could be in danger.

Watch it this Sunday and get our podcast

Be sure to tune in to the Season 4 premiere of Once Upon A Time this Sunday, September 28, at 8/7 Central.

Our podcast will be back with live initial reactions after the Eastern and Central airing of Once Upon a Time. Chat with us during the episode and stick around for our live podcast at 9:15 pm (EDT/GMT-4), all on ONCEpodcast.com/live.