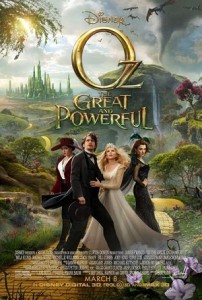 Disney’s prequel to the classic Wizard of Oz story is fun for the whole family and tells us the story behind the story.

We’ve seen The Wizard of Oz referenced many times in Once Upon a Time, but Disney’s version of this story fills in until we see Oz in our favorite TV show.

This is a prequel to the traditional The Wizard of Oz and helps us see how the characters became who they are as we know them.

Oz the Great and Powerful would be fun for the whole family! It’s mostly clean with only maybe one foul word and minor suggestiveness.

We weren’t very impressed with the 3D, but the first part of Oz the Great and Powerful was in black and white and smaller screen. This allowed the producers to do some cool effects.

Buy the Oz the Great and Powerful soundtrack from Amazon.com and iTunes.

If you see Oz the Great and Powerful, let us know what you think of it in the comments below!

If you’re trying to decide between the two recent fairy-tale-based movies, we recommend Jack the Giant Slayer if you have older kids and want more action and adventure. If you have younger kids or want a fun family movie, then we recommend Oz the Great and Powerful.

We were first confused about which witches were good and bad, and who would be the famous Wicked Witch of the West.

Oz (or Oscar) was a player and his actions gave Theodora the motivation to embrace evil.

A few characters in Oz and Kansas were played by the same actors, which carried over certain emotions for the wizard.

We got to see more of Oz: the Emerald City, China Town, the Dark Forest, and more. We also saw hints at the iconic tin man, cowardly lion, and scarecrow.

Evanora looked really ugly at the end, but Theodora didn’t look quite ugly enough as the Wicked Witch of the West. But we laughed at how she embraced the broom for flying.

Mila Kunis and Rachel Weisz were great as the wicked witch sisters Theodora and Evanora.

Oscar’s twist at the end was a great way to introduce the wizard. But it also seems a little Star-Wars-like.

When Oscar called himself, “maybe not the wizard that Oz expecting, but the wizard you need,” we thought of Batman: The Dark Knight. The master tinker also reminded us of Bruce Wayne’s conversations with Lucius Fox.

All the cast were great for their parts.

Also check out our review of Jack the Giant Slayer.