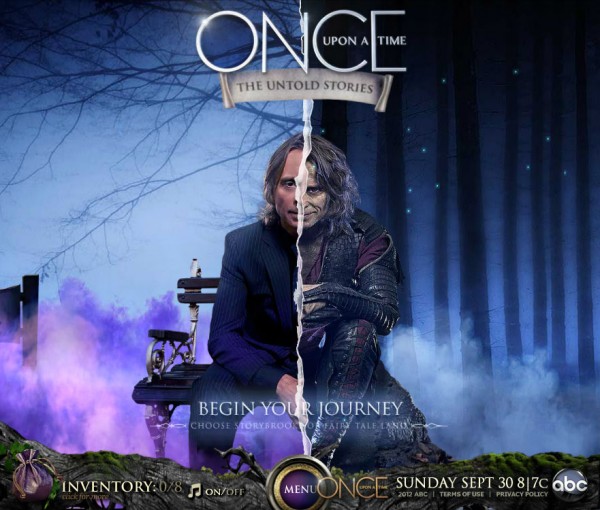 Try the “The Untold Stories” app!

“The Untold Stories” starts with Mr. Gold’s giving you some clues to find two items: the Genie’s lamp and the chipped teacup. Along the way, we see descriptions of characters and basic plot points.

Dr. Archie Hopper’s files are left on Mr. Gold’s desk in his pawn shop. These files contain observations of several characters, both their Storybrooke profiles and notes about their fairy tale counterparts.

UPDATE: the following dates have been removed, which makes me think that “2019” truly was a typo. Additionally, the writers have expressed that they want the show to be timeless.

Each profile has a date, which reveals an interesting jump.

Considering that these notes contain post-curse information, we can infer that the curse was broken in probably spring, 2009. But the jump to 2019 is unexpected and unexplained. It’s also interesting that all of these 2019 notes were recorded on the same day, January 13 (which happens to be a Sunday).

This could be a seriously overlooked typo from trying to change “2009” to “2010,” or it could be a hint that we’ll see a time-jump in Storybrooke.

Who is the unnamed patient? 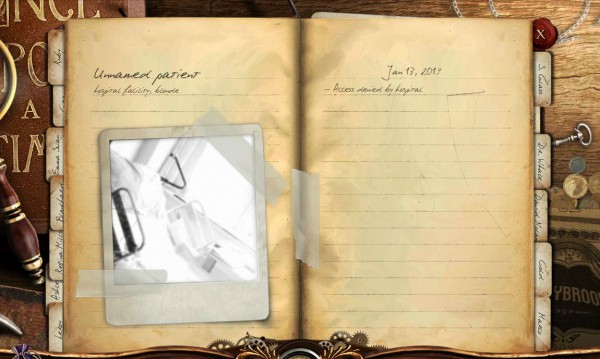 Dr. Hopper’s files reference an unnamed patient with the only description as “blonde.” This indicates a female (“blonde” is the feminine form of “blond”), but only shows an empty hospital bed.

Looking at the list of names in Archie’s files, we notice that Belle is missing. She could be the unnamed patient, or perhaps another blonde fairy tale character we have yet to met.

Rumplestiltskin can “glimpse the future” 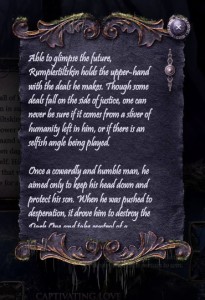 In our Once Upon a Time podcast, we’ve debated the truth of whether Rumplestiltskin really could see the future.

One alternate explanation was that his predictions for the future were the expected results of his manipulations. To others, this could seem like seeing the future.

But “The Untold Stories” tells us quite clearly that Rumplestiltskin can “glimpse” the future. That seems to imply that he can see some things, but not everything, and not full details.

When ABC announced “The Untold Stories” on the official Once Upon a Time Facebook page, they hint that we may find clues about who Dr. Whale could be.

Check out our new app to uncover untold stories about your favorite characters. You may even find a clue or two about a certain doctor’s true identity.

Archie’s file on Dr. Whale is vague and sparse:

For now, less than half the game is unlocked:

“The Untold Stories” shows some locked places and plenty of future secrets:

What did you find?

Try “The Untold Stories” yourself and tell us what stands out to you and what you think of these mysteries! Comment here on the blog or post in our Once Upon a Time forums.

“The Untold Stories” requires a desktop computer with Flash Player.

Click the social-sharing buttons or retweet this to your followers:

Play "The Untold Stories" on Facebook and find clues about #OnceUponaTime! http://t.co/oVmsjWMy