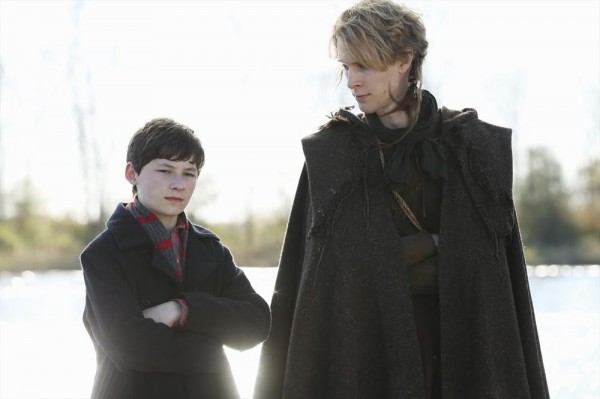 Emma, Regina, Mary Margaret, David, Neal, Hook, Rumpelstiltskin, Wendy, Tink, Henry and the rest of the lost boys made it back to Storybrooke but for Peter Pan, the real fun is just about to begin.

The residents of Storybrooke are overjoyed upon the return of Henry and our heroes from Neverland. But unbeknownst to them, a plan is secretly being put into place by a well-hidden Pan that will shake up the very lives of the townspeople. Meanwhile, in the Fairy Tale Land that was, Snow White and Prince Charming’s honeymoon turns out to be anything but romantic when they go in search of a mythical being that could stop Regina cold in her tracks.

These are just our first thoughts about this Once Upon a Time episode. We’ll share more about “The New Neverland” in our upcoming full discussion live on Wednesday December 11, 2013, at 8:00 p.m. (EDT/GMT-4).

This episode felt like going through multiple phases. Although it kinda slows everything down, it was refreshing to see something a bit lighter than all the actions we have gotten so far from the last eight episodes. It was great to have a breather off the fast-pace episodes we have seen so far.

The body switch made more sense once they landed in Storybrooke, by the way. And the title “The New Neverland” made more sense after seeing the episode. We initially thought that they would show us what’s left of Neverland but we were wrong.

Pan-as-Henry has gotten his hand of the curse, especially since Emma is now with her parents. However, the curse requires the heart of the thing you love most so whose heart is Pan going to use? Felix’s? His own heart? Or will he use Henry’s heart and just switch back his body just in time?

Is Tinkerbell going to redeem herself? With the Blue Fairy gone, can Tink become the new Mother Superior?

After today, we have one more episode before the winter hiatus so there may be a major cliffhanger next week. Are we going to see the curse hitting but ending it just before it fully hits?

The back stories we got from the Enchanted Forest was a bit surprising. Although, it was interesting to see Snow and Charming’s wedding from a different perspective after the Evil Queen threatened Snow, Charming and the entire kingdom.

Prince Eric chopping the fish when Ariel found him was kind of funny, but a bit anti-climactic. However, we were right when we theorized that Eric might be working for the fish canary.

It’s a bit surprising and honorable that Hook is backing off but is he really moving on from Emma and is now pursuing Tink?

Both Robbie Kay and Jared S. Gilmore are both doing a great job playing each other.

What if Pan enacts the curse and the curse backfires? Instead of freezing time, what if it takes them all back to the Enchanted Forest where they remember their former selves but forgotten what happened in Storybrooke? What would happen to Emma, then if it happens?

If you have your own theories or feedback that you want to share, send it on to us through email (kindly use the Episode Title in the subject field), use the comment section below, or simply join us in the forum and discuss your thoughts regarding tonight’s episode.