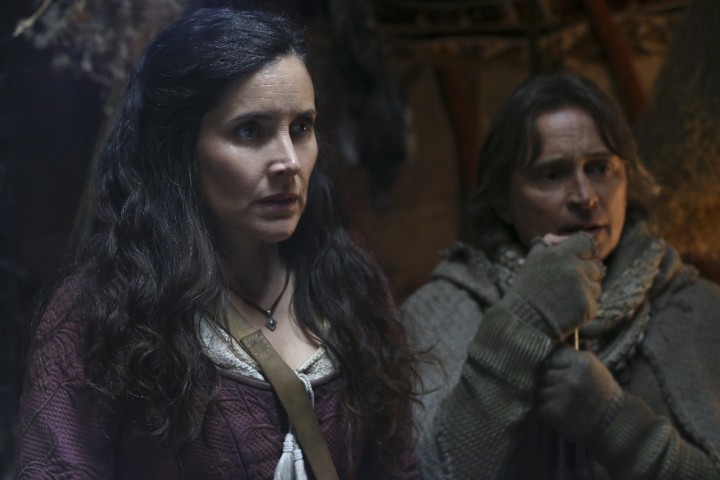 In the Enchanted Forest of the past, Milah sold their last coin and urge Rumplestiltskin to do something brave to help their son, while back in the Underworld at present, however, a helpful dead person that Rumplestiltskin have known a long time lend her aura so that they can confront the God of the Underworld themselves. Is Milah stuck in the river and lost, or was she enabled to move on? Was this the one deal that Rumplestiltskin said that went badly? Did Emma forget that her heart couldn’t be taken out? All these questions plus a theory of ours that has finally come in fruition on our Devil’s Due initial reaction!

Hook’s captivity takes a dark turn when Hades threatens to condemn him to the River of Lost Souls after Hook refuses to choose which three of his friends will have to remain in the Underworld. Meanwhile, Gold is suddenly eager to help Emma, Snow, David, Regina, Robin and Henry find Hook so he can return home to Belle; but in order to do so, he must find his ex-wife Milah in the Underworld and ask for her help. In Fairy Tale Land flashbacks, Rumple and Milah face a life-or-death crisis concerning their son, Baelfire, that forces Rumple to make a deal that will haunt him.

These are our first thoughts about this Once Upon a Time episode. We’ll share more about “Devil’s Due” in our upcoming full discussion (usually live on Wednesdays at 7:00 p.m., USA Eastern Time).

It’s about time that one of our theories come in fruition that we’ve put out there 2 or 3 years ago, and that was Belle and Rumplestiltskin will someday have a child. It certainly complicates things a lot more because of Rumple being the Dark One and a villain again. It was unfortunate that Milah was a goner because it was the first time that we ever liked her. We were even looking forward to a Milah and Hook reunion, but with Emma on the side would make things super awkward. That being said, they’ve certainly verbalized what we’ve been talking about Emma and Hook’s relationship. Then again, it might be weird, but it’s not like any of them are related.

A horse was Regina’s reset? At first, when the horse was there we wondered if it was her childhood steed that she killed to sacrifice in order to enact the curse, but it might be related to mercy, like what she was maybe trying to do when she was trying to use her magic before was using her angry side of her magic. Now, however, she was using the mercy side.

it was a gift from Daniel
— rikraq

Was it a gift from Daniel, since people who have moved on to a better place can kind of see some of what’s going on in the other realms? Perhaps Daniel saw Regina go to his grave, saw the stuff going on and sent that horse to help her get her magic back somehow? We were glad he wasn’t in the Underworld because as we’ve seen in the episode, The Doctor, it already seemed that the Daniel storyline has been wrapped up. It wouldn’t have done justice if he would still be in the Underworld. And we finally know his full name now—Daniel Colter—nice for a person who was known for being a stable boy.

Is Milah stuck in the river and lost, or was she enabled to move on? Hades said that if you touch the river, you will be lost forever.

There was something else that stood out to us in this episode about babies aside from Belle and Rumple’s, and that was Emma’s baby stuff back at her home, which includes her baby mobile. That’s understandable that it was there, but there also was a baby bed below it. Was it her own baby bed, because Emma was supposed to die when she was a baby back in the Pilot, that’s why her stuff was there?

Hades wants Rumple to be his lackey and continue sending people down to the Underworld and Rumple’s gone along with it. There’s got to be a loophole somewhere but Hades found the loophole again, and it will probably going to be loophole after loophole after loophole. But if you think about it, Hades has been watching Rumple’s work for a very long time so if anyone’s going to find a loophole with Rumplestiltskin it’s got to be him. If Hades could come and take souls he wouldn’t want Rumple back in Storybrooke killing people so desperately. Then again, back in season one, Price of Gold, deals could be transferred like when Prince Thomas offered to pay the price instead when Cinderella admitted that she made a deal with the Dark One.

We loved that Milah is a crosswalk guard, protecting the dead children and it was really cool to see her. There are certain characters that we don’t think of until they show up and Milah is one of them. Milah’s appearance fit really well to the story; it provided some chuckles. It was good to see her and that she was kind of reformed in her own as a dead person. She was still super unpleasant in the past but she has become much better in the Underworld.

Early on in Rumplestiltskin’s history, we learned about a deal going badly, and we’d theorized that that deal was the deal he made with his son over going to the Land Without Magic. But after this episode, it might be possible that this was the one deal that he broke that he was talking about, of him giving out his second born child that’s why he became so obsessed with making deals and knowing all the details involving making deals. Moreover, this is also probably what inspired Milah to start chasing after Hook. She clearly was very unhappy with her married life when she first encountered Hook.

We like that we’re seeing these missing pieces falling into place. Some missing pieces don’t always seemed that relevant, but some of them are little pieces that we’ve wondered, like why did Milah start going after Hook or how did they meet; how did Henry Sr. get to Wonderland; what was that first deal that went badly for Rumplestiltskin. Some of that stuff are filling in some of these details and it’s nice. It also helps legitimize the flashbacks, instead of just making the flashbacks a means to tell the existing story but the flashbacks can also sometimes give us some of those details that we’ve wanted.

Another details that they’ve have not been out of pulled left field for us was Emma thinking that she can share her heart with Hook, when we know that her heart cannot be taken. Maybe it can still be taken if she, herself, takes it out, which we know can be done. Emma knew that her heart can’t be taken so why does she seem confused when it didn’t work? Unless she can allow it to be taken because it’s part of true love?

Does Hades have some control over their magic? What did you think about this episode? Send us your feedback and join us this coming Wednesday for full discussion of Devil’s Due.