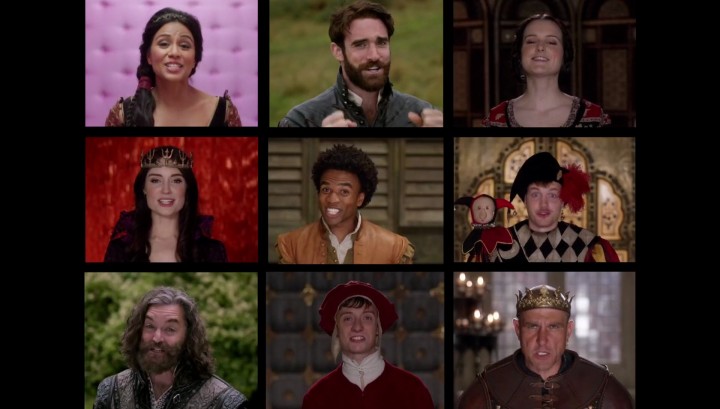 We’ve finally caught up with Galavant season 2 and we’re ready to talk about its latest season. Join us as we share our favorite moments, favorite songs, our hopes and theories for season 3 on our Galavant Season 2 review.

Buy Galavant through our links and support the podcast!

Although Galavant’s 2nd season had a short run, we have watched and enjoyed this season, and think that Once Upon a Time fans will enjoy Galavant because it has all the fairy tale magic stuff that Once Upon a Time has, but there’s just a little bit more that we, sometimes, find enjoyable because Galavant is, a lot of time, making fun of themselves. They don’t take it too seriously, yet really invested in the characters and the story. It was very much what the president of ABC once called it, which is a mix between the Princess Bride and a musical, which is exactly what Galavant is; the humor of The Princess Bride, the fun music, and Alan Menkin has done an incredible job of composing the music for this. There are even some little nods to Once Upon a Time, but also plenty of references to other pop culture stuff.

Overall, season 2 was brilliant. It was a 5-week really well-spent. We were a little confused on a couple of things, but after re-watching season 1, a lot of things were explained and carried over, which was cool because it helped going into the new season, making it easier to catch up to season 2. Plus, you don’t have to be a Once Upon a Time fan to watch Galavant. It’s fun, with great music and a lot of tunes that will get stuck in your head.

Speaking of tunes getting stuck in our heads, some of our favorite songs this season were “A New Season”, the song that opened the show this season; we also really liked “Off With His Shirt”, the song that was sung in the Enchanted Forest bar; “Giants vs Dwarves”; the Galavant Recap song in the finale; But one of our absolute favorites is My Dragon Pal and Me, which was sung by King Richard to Tad Cooper, who is a dragon. We liked how they used the clichés during many of the songs, like in “My Dragon Pal and Me”, they used the cliché things like dancing with the one you love and singing a little song from the 80s.

Another song that got stuck in our head was “Only Good Dreams,” which was sung by Sid to help Gareth fall asleep. “Today We Rise” is also a favorite, which is a combination of irony in Sid’s song as he was rallying the villagers and the peasants to rise up and fight against the castle.

What am I feeling?

Goodbye – I really did not expect a sing a long with Death, I didn’t expect that. I thought they would just find away to save Galavant before he died.

Having seen both seasons 1 and 2, we noticed certain pop culture references and a lot of little parallels. In the first season, there was scene where Sid threw the sword to Galavant, which also happened in season 2, and killed Galavant. Also in the first season, King Richard was stressing about what words he was going to say when he caught Galavant and he settled on, “Well, well, well”, which is what he ended up saying to the wedding planner as well. The foundation for Madalena and Gareth’s relationship even was set in season 1. It didn’t start only in season 2, but was in the dungeon in season 1.

One of the things we love to look for are Easter Eggs and one of the most enjoyable things was looking at Chester Wormwood’s To-Do lists for the Wedding Plans and the Evil Plans. 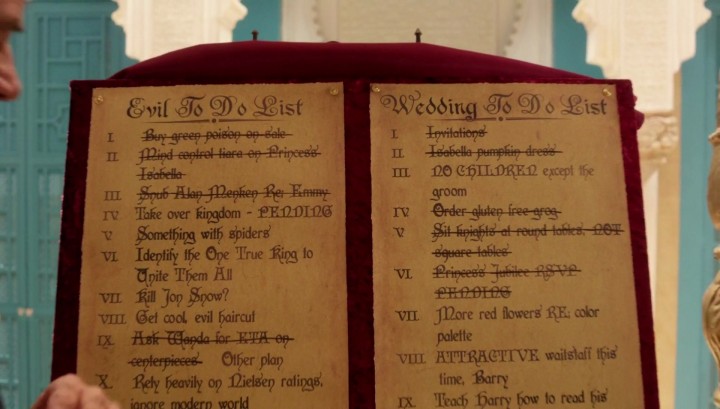 Will they come back for a third season? Galavant is a nice, breath of fresh air that puts a smile back on your face, especially since we’ve just come from all the tension and theorizing, and shipping and posting in the forums with Once Upon a Time’s mid-season finale. 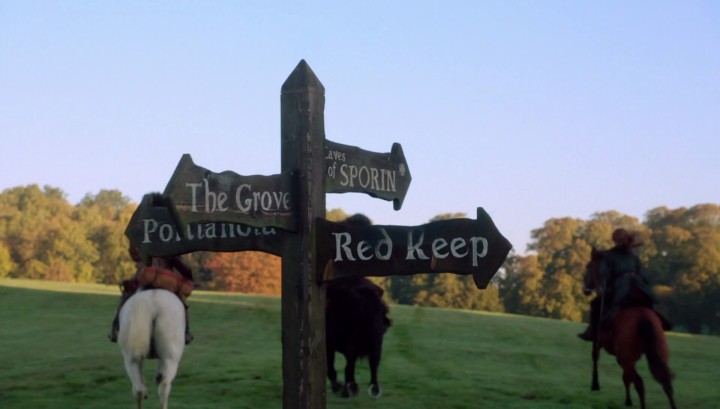 The thing that we also love about Galavant is that they know just when to poke fun of themselves and their game, like the magical amulet McGuffin that no one has ever seen before, Neo of Sporin, spoofing various famous musicals and other fantasy movies/literature. The meta nature of the show is a huge selling point.

I liked how during the first season it was about Galavant trying to become the hero he used to be and the second season was about King Richard finding his strength and becoming a hero. They even had there own song about it Galavant: This is my moment in the Sun, and Richards song with his inner child.

Although Galavant’s father was replaced for season 2, it was really cool that they got to get the same actors that played young Gareth and young King Richard from the first season.

Amazing Season from beginning to end. Just like Season 1, King Richard is the best part, and with such a great character arc. We saw him evolve from a foppish virgin tyrant to the One True King to Unite Them All. I even loved his relationship with Roberta, as it was about time that Richard found his soul mate! Also loved Galavant, Izzy, Sid, Madalena, Gareth, and everyone else! I even enjoyed Wormwood, who was a fun new villain to spice things up. A fun twist with Wormwood was that he was still totally committed as a wedding planner, to the point where he even gave a few tips right before he dropped dead. Overall, this show is a whole lot of fun, and I would absolutely loved a 3rd Season!  I will forever question why so many viewers wouldn’t give this amazing show a chance, but I do have to give ABC credit making Season 2 a reality at all. It was a rare moment where a network gave the show another chance. I will keep my fingers crossed for another surprise renewal, but if this is truly the end, I’ll always be incredibly thankful for all the joy this show has given me.

With Galavant, because it’s designed for fun, it’s harder to be critical about it. It’s like, how it’s more difficult to insult someone who’s smiling very brightly at you and laughing at every critique you give them and taking it. Galavant, in a way, seems that way. The show might have some plot holes, but it’s a fun show and we were looking for fun, which Galavant delivered on nicely.

Tad Cooper, especially the final scene of Richard and Tad Cooper in the ending definitely tops our favorite moment of the season. It was a joy to watch seeing Richard actually believe that Tad Cooper is really a dragon, plus to see the reward and glee in his face when Tad Cooper eventually became a real dragon. 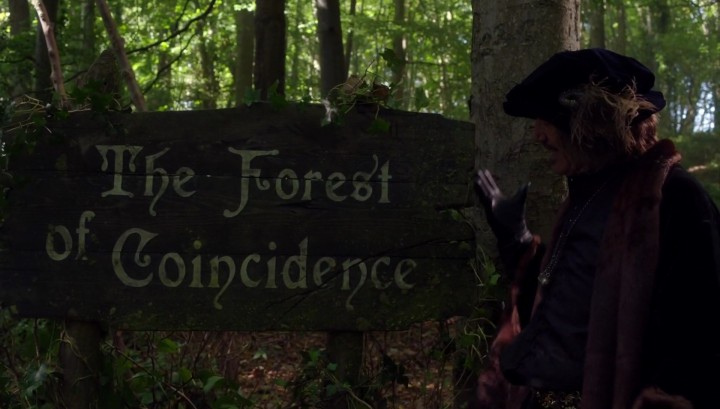 Another favorite moment is when Gal and Izzy found Tallahassee and also by the beach. We loved the way it happened, plus the song that they sang together about how, as epic conclusions go, this was rather small but it was perfect for them. We also liked the Forest of Coincidence, which was clearly one of those meta references where they’re clearly playing with some of those horrible tropes that you see in other fantasy musicals, politics, and other shows.

One of the things that we didn’t catch until watching it for the second time was when Wormwood did a Titanic thing with Madalena by spreading her arms out and saying, “Just don’t let go.” 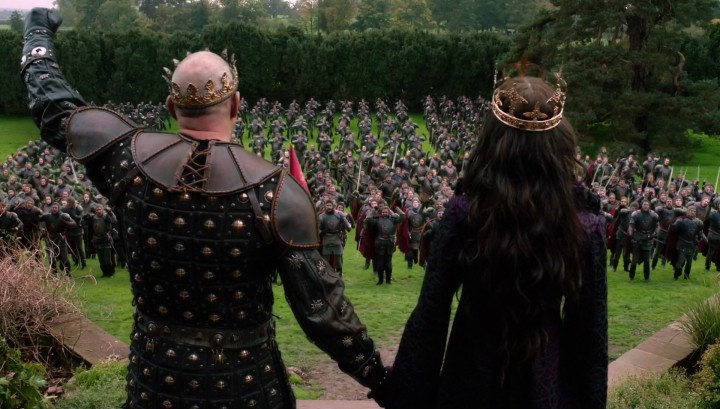 When Madalena and Gareth professed their love for each other in episode 7 in front of the soldiers. That was funny and nice and sweet.

It was a cute, little moment. We were surprised that we really responded to those two. We never thought we would sympathize with Madalena so it was nice that they made her a little bit more human.

Richard racing to get to Roberta, I cried during his speech.

Richard killing Wormwood for what he did to Tad Cooper. “You may have killed one dragon, but you’ve awoken another!”

Hopes and Theories for Season 3 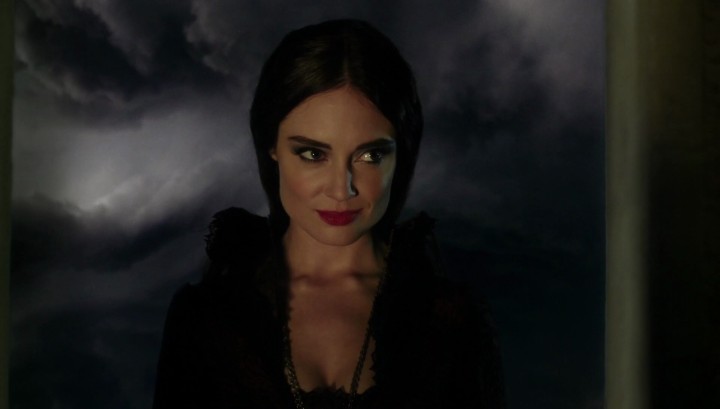 We really hope that they get to have another season, but the way they wrapped up season 2 does bring a comfortable ending to the series if they had to end it here;  we’re not sitting with a cliff hanger, unlike what they did with season 1. But if Galavant will come back for another season, we hoped that Izzy and Gal decide that while they like the quiet life, they would want to go on more adventures and see the world a little bit. Also seeing Madalena at the end of the season 2, it would be cool to see that continue on in season 3 as a dark, evil queen. It would also be great to discover that the Dark Evil Lord to turn out to be Rumplestiltskin from Once Upon a Time. And if they get renewed for season 3, it would also be cool to see more of the monks.

Somebody came up with the hilarious theory that the DEL is actually Weird Al Yankovic’s Monk character, because he was laughing maniacally leading into that scene. Now I can’t get that idea out of my head. Maybe the Monk secretly wants to settle the score with Izzy, because she forced him to break his vow of singing!

When Madalena went to the Dark Evil Lord’s castle, he revealed that he was a fashion designer, so that cancels the idea that he was a monk. Unless, of course, he has a side job. 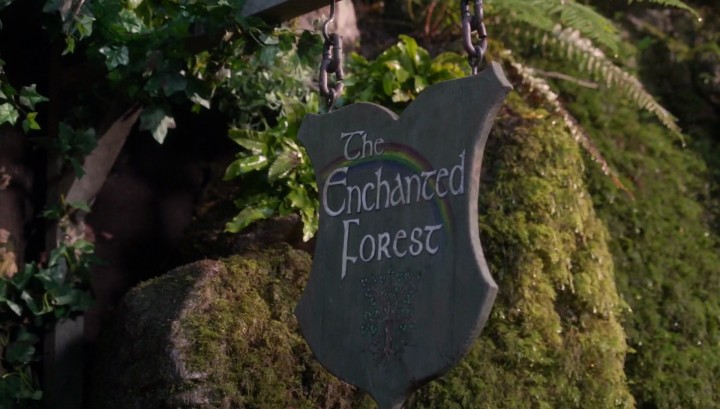 What did you think about Galavant season 2? What other little things that you noticed that you think we missed? Do you have any theories about season 3 if it gets renewed? Share them all using the comment section below! Plus, stay tuned for our next episode as we are releasing a separate episode dedicated only for Once Upon a Time season 5B spoilers. Once Upon a Time returns for its 100th episode on March 6.