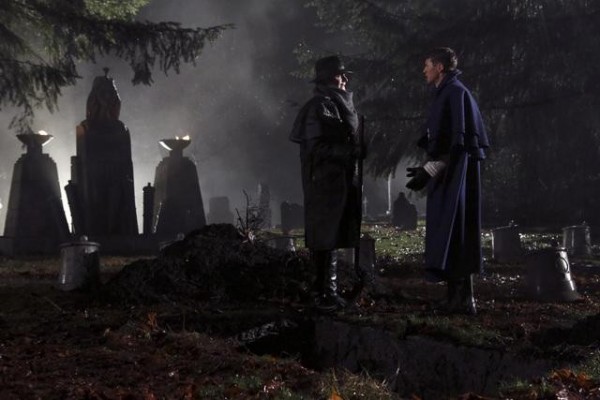 Storybrooke residents debate the fate of an outsider and we learn about Dr. Whale's past monsters. These are just our first thoughts about this Once Upon a Time episode. We'll share more about "In the Name of the Brother" in our upcoming full episode.

Storybrooke residents debate the fate of an outsider and we learn about Dr. Whale’s past monsters.

These are just our first thoughts about this Once Upon a Time episode. We’ll share more about “In the Name of the Brother” in our upcoming full episode.

Dr. Whale is tasked with mending Hook’s wounds and performing surgery on the stranger whose car crashed upon entering Storybrooke. But some of the townspeople fear that the stranger may have seen magic — which could expose their true identities to the world — and think that leaving him to die would be the best solution. Meanwhile, as Mr. Gold tries to reunite with a despondent Belle, Cora attempts to reunite with daughter Regina; and in the land that was, Victor desperately wants to prove to his disapproving father that he can, indeed, bring back the dead.

Send your questions for “Dr. Hopper”!

We’ll have the honor of interviewing Raphael Sbarge, who plays Jiminy Cricket and Dr. Archie Hopper. What would you like us to ask him? Email your questions with the subject “Questions for Archie” to feedback@ONCEpodcast.com.

Watch our website and Twitter for an announcement when we will record this interview so you can watch it live!