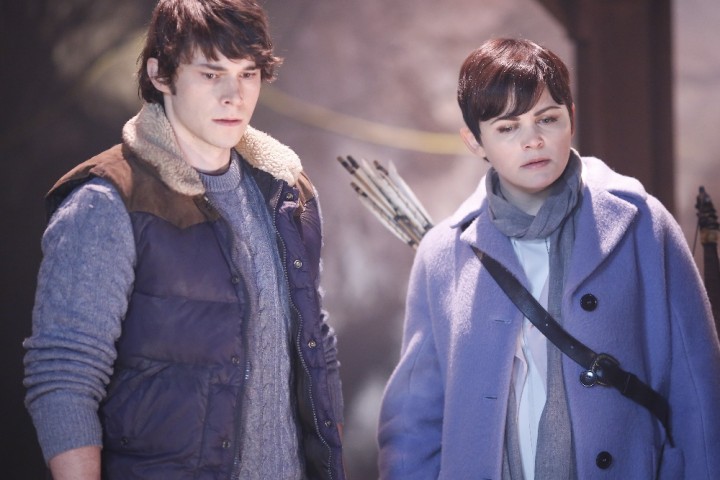 As the search for Hook continues, Mary Margaret finds an old friend who’s the only one strong enough to defeat Hades’ little pet. Back in the Enchanted Forest flashback, however, a demigod helped young Snow White stand up from those bandits in order to preserve peace in her kingdom.

Jeremy is still traveling right now but Erin is back to fill in for Jeremy for our initial reactions!

In the Underworld, an escapee from Hades’ prison informs the heroes that Hook is being held captive. But before the heroes can rescue Hook, they must face a terrifying beast that guards the prison. Mary Margaret searches for an old childhood friend who knows how to defeat the monster. However, once reunited, she discovers that her friend is no longer the hero he once was. Meanwhile, in an Enchanted Forest flashback, a young Snow White struggles to preserve peace in her kingdom and must learn how to be a true hero if she wants to one day become queen.

These are our first thoughts about this Once Upon a Time episode. We’ll share more about “Labor of Love” in our upcoming full discussion (usually live on Wednesdays at 7:00 p.m., USA Eastern Time).

We enjoyed this episode more than the last episode. The return episode was focused more on bringing back all of these awesome characters who we love than actually furthering the plot. But it’s really nice to get that acknowledgment that she’s done with being Mary Margaret and she’s now fully Snow White. Is she going to carry that until Storybrooke? There was a little bit of that with Regina when she stopped being the Evil Queen anymore and started being just Regina, but this seemed very intentional and it’s time for her to stop being Mary Margaret and start being Snow White again. Could this be a foreshadowing that they’d be back in the Enchanted Forest for the sixth season and Mary Margaret will be fully Snow White then? If so, it would be really neat to have everyone back in the Enchanted Forest back in their places, with their “happy endings” in the place where they’re expected to have those happy endings.

What’s going with Meg? She’s not supposed to be this pushover, but a strong, heroic woman from the Greek Mythology as well as from the Disney’s version of Hercules. But we kind of wonder about Meg because something just doesn’t seem right about her. Is Meg connected to Cerberus? It seemed it was always going after her, both in the Enchanted Forest when she and Hercules died, as well as here in the Underworld. She’s in the middle of the town and it’s going after her, not everyone else. Plus, when they killed Cerberus, she even fainted. Did they hurt part of her kind of like Voldemort and his horcruxes? Why is the creature going after her in the present day but not so much in the past?

On the other hand, there is a connection between Hercules and Hades; Hercules is Hades’ nephew and Hades is Hercules’ uncle. So if they’re going with the whole Greek Mythology and gods and demigods sort of thing, then that would mean Poseidon would also be one of those gods or demigods. However, they never addressed Poseidon as a god, but more like a King of the Sea.

It was also cool to see Cruella in this, but Henry needs to stop acting like he’s 9 years old. He’s not that gullible, he’s a super strong character when he wants to be. Emma doesn’t need to be saved, she’s not been labeled a murderer and it’s not like a title she’s still guilty about and still carrying. He needs to just do what he’s there to do. That being said, it was a really creative way of allowing him to still be the author and reveal that the quill is in the Underworld, so bravo to the writing team for working the quill into the story. Perhaps the magic quill will come into play again, with his writing the story?

Is Olympus simply Hercules gets to go or is that where everybody else goes, too? Is Olympus the “better place?” What is Hades up to? Is he expecting Hook to carve the name of the next person to die in the gravestone? Is there something he can do to stop someone from getting the opportunity to leave? Are the people that are there in the Underworld that are not actually dead could be killed while they are in the Underworld and then they would have to stay there because they would have unfinished business?

We were disappointed when we didn’t get the answer of why is Storybrooke like the Underworld. We thought that we would finally get the answer to the question as soon as it was asked but his response was a total let down.

Will Henry wield a lot of power with the quill if he does actually try to do something with that? Will Henry do something good and not what Cruella wants him to do? Perhaps he could write them all out of there and with Hook, which is the whole motivation in the first place.

It’s nice to know that Hook is not in some place worse. We know where he is and now he’s just with Hades and being tortured basically, mentally, by Hades. But how would Hades know that he needs to be the one that he’s going to torture? What do you think about Labor of Love? Send us your feedback and join our full discussion this coming Wednesday!