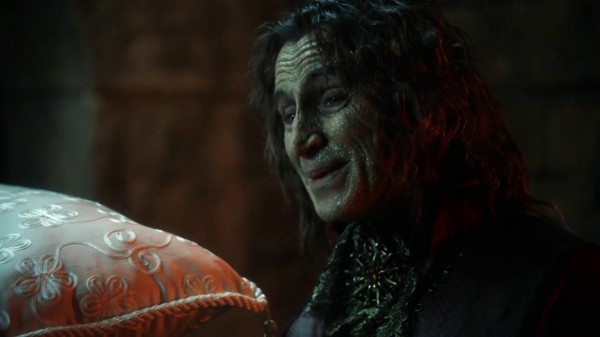 Will Belle forever be known as Lacey? Will Rumple become Dark again? What will happen to the Beans? And what are Greg and Tamara REALLY up to?

This week’s episode was written by Edward Kitsis and Adam Horowitz!

These events are squeezed between the months of “Skin Deep”

More proof of inconsistency: in “Skin Deep”, there is a bow and arrow in the background.

The wand Robin Hood steals looks like the one that belonged to Cinderella’s fairy godmother.

Rumple probably had the wand for a while and, after it was taken by Robin Hood, he was looking for that specific fairy to get it back. He also called the wand ‘pure evil.’

Rumple has used several different wands. He has a collection of wands. It seems he favors this wand. 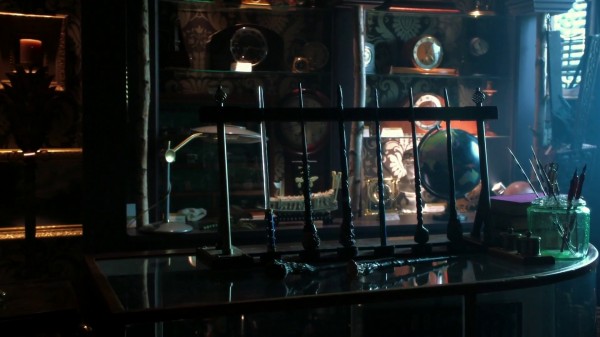 “If you don’t know how to use that wand it can do nasty things to you.” – There seem to be a lot of references to people not knowing how to use magic.

All that blood on the apron seemed to foreshadow Robin’s death… guess not. And there was a LOT of it.

Belle freed Robin but chose to remain because of her deal with Rumplestiltskin. Belle has shown several glimpses of being very brave, even before we saw her fight the Yaoguai.

“People who steal magic, never have good intentions” – Turns out not to be as true as Rumple may have thought

Is Rumple’s quote a hint to Tamara? Does Tamara have good intentions?

Could Tamara be Maid Marian and Robin Hood’s child? Robin Hood was a thief and would seem to be a villain, but he wasn’t. Maybe the same could go for Tamara?

Rumple’s cart had no driver. Magic!

Sheriff of Nottingham lost so much! His girl, his pride, his tongue…

It is implied that Marian’s child is Robin’s. Who were the men pulling his cart? His merrymen? Is there more to Robin Hood’s past?

After watching this episode I became very curious about Robin Hood’s past. We haven’t seen really much about it. We don’t know why his wife is sick or how he get his magical bow. I’m also wondering how he know that Rumplestilskin has a magical wand which can heal his wife inside his castle and how to use it. Did someone telled him about it?

Beauty and the Beast

Belle told Rumple that he’s “not the kind of man to leave a child fatherless,” but that’s exactly what he had done and that’s why Belle’s words stung so much.

Rumple brought Belle to the library like in Beauty and the Beast. There was a bed in there. Was the library her new room?

The Bow and Arrow

Did Rumple see the future prior to this episode and see that the bow and arrow would be important in the future?

Mary Margaret was using the same bow (Robin’s) in “Selfless, Brave, and True”, as pointed out by Camila from Chili.

It was Henry’s Birthday! His cake had 11 candles, spotted by Phoenix815.

Henry chose a wand in the dream, which was the same one as Cinderella’s fairy godmother’s. Is there any relevance to Henry?

It still isn’t clear if Henry is the prophesied boy, though it may be clear in Rumple’s mind.

Regina discovers in this episode that she is related to Rumple now!

We got some more clarity about Regina getting Henry. Gold attributes his “procuring” Henry to be fate, which has a sense of humor.

How much does Rumple know about August/Pinocchio’s story?

Regina seems to WANT dark Rumple back. Maybe she wants a scapegoat? Maybe she doesn’t want him to protect Snow anymore? Maybe she just loves to suck in all happy endings?!

Gold seemed to want his whole family back together: Belle, Bae and possibly Henry.

Blue Fairy had once told Bae that he is the one thing that can keep Rumple from becoming dark.

Who has Belle been while she’s been in a memory-less limbo? David needed something to remember, so did Belle. Both were injured before they hit limbo, so maybe if they are injured and cross the line, they don’t just get their Storybrooke memories (unlike Sneezy, who just lost his Enchanted Forest memories)

How long was Belle in the hospital??

Belle confirmed her “sense about people.” She can see the good in people.

Does Tamara know something about Kurt and hasn’t told Greg?

Greg has been documenting occurrences of magic on a Storybrooke map.

But “lousy” is also slang for “full of,” which was an odd definition for us.

Why did Greg say “If Neal suspects anything, it’s going to make everything have to do that much harder?” EVERYTHING? What are they planning?

How did Tamara get Hook? She probably took him when she went up to Neal’s apartment.

The road of the bean field seems to be the same one that Rumple/Emma/Henry left on and the one that the package came on.

Is “Lacey” an obfuscation of “Lacie”, which is an anagram of “Alice”?

Also, “Lacey” may be connected to “Lacie, Tillie, Elsie”, three girls in the Dormouse’s story from Alice in Wonderland in the chapter, “A Mad Tea Party”. Tillie and Elsie were two real girls that were sisters of the real Alice, Alice Little.

The bar (the Rabbit Hole) has been seen before when the girls had girls night.

The barkeeper reminds Jenny of LeFou. Why does the bartender sound like he’s known Lacey for a while?

Why is Regina back in her mayor’s office and calling herself the mayor? What kind of paperwork does she need to go over?

Regina and Gold both agreed that true love’s kiss would break the curse on Belle. Good luck getting that Rumple.

Dwarfs are keeping the beans a secret, but Granny can “smell” something?

David and Gold previously had an agreement that Gold wouldn’t interfere in David’s life and family. Now Gold owes a favor! Did Gold twist the words so that David has to help him accomplish this for Gold to owe him a favor?

SB Nottingham sheriff (Keith) said he had his eyes on Belle for a long time. This makes sense because he remembered his past.

Don Juan had some deal with Rumplestiltskin before? Magical seduction ability???

Emma’s reading the book. Possibly reading up on her past to prepare for her journey back to the Enchanted Forest. She even subtly invited Neal.

When Lacey described Gold’s reputation, we now realize she was turned on by it. Lacey is the opposite of Belle “You’re not the man I thought you were… and I’m glad.”

Neal and Mr. Gold did have a kind of making up. Gold might just think he has Neal, so all he needs is Belle.

Claudia believes  that Gold may sacrifice his powers to save Henry, and that’s how Henry is Rumple’s undoing.

Young August and Henry are hitting it off. This is precious.

We think that the undoing may be the surprise, not the boy.

What kind of “dirty work” does Tamara need done by Hook? Maybe to kill Rumple!

First of all, thank you Daniel, Jenny, and Jeremy for doing this podcast. It makes us think very deeply about the plots, characters, and themes of the show! I enjoy tuning in to you guys!

I think that someone with magic has wronged Tamara on a very personal level. That’s the only reason that makes sense to me for her to go through great lengths of acquiring the potion from the dragon, to staging and going through with an engagement with Neal.

What is motivating Tamara to go after magic? How’d she find out about magic?

Nealfire was a captive on Captain Hook’s ship until he was rescued by Peter Pan, who then took him back to our world along with Wendy and her brothers. That is how he ended up in a A Land Without Magic after 250 years.

Maybe it coincides with when Hook left Enchanted Forest to Neverland.

Finally, Daniel has officially succumb to the idea that Neal went to Neverland. Hello, coffee!

You can now preorder the complete second season of Once Upon a Time on Amazon.com!