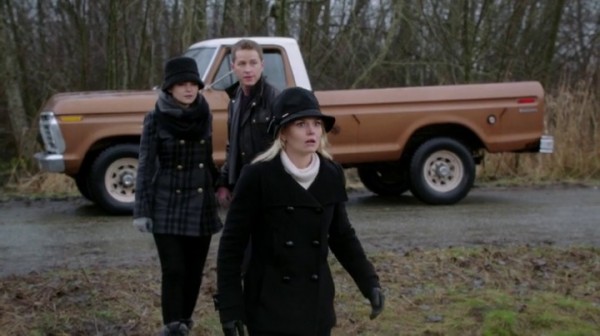 When Belle is released from the hospital, Mr. Gold continues his attempts at jogging her memory with a little help from an unexpected source.  Meanwhile, Anton and the dwarves continue to work on the bean crop all while Neal spends time with Henry and Regina learns of the new family connections in town. Emma is torn about whether she wants to return to the Enchanted Forest with her family or stay in our world.  In the past, we see some of Rumplestiltskin and Belle’s first interactions and meet a thief possessing a powerful weapon.

These are just our first thoughts about this Once Upon a Time episode. We’ll share more about “Lacey” in our upcoming full episode live on Wednesday, April 24, at 8:30 p.m. (EDT/GMT-4).

Mr. Gold enlists the aid of David to help him try to jog Belle’s now cursed memories and get her to love him again; and when it is revealed that the magic beans Anton (Jorge Garcia, “Lost”) and the dwarves have been harvesting have begun to grow and could possibly transport everybody home, Emma is torn over whether she would want to live in fairytale land or stay in our world. Meanwhile, in the fairytale land that was, Rumplestiltskin forces Belle to accompany him on a hunt to kill a thief, whom she had freed in the name of mercy.

Some of our interesting discussion points (in no particular order)

Talk about “Lacey” in our Once Upon a Time forums