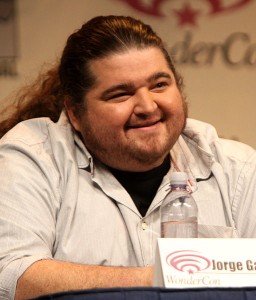 Jorge Garcia (Hurley from ABC’s Lost) has been cast as “The Giant” for Once Upon a Time‘s second season. We have no word whether this is a single-episode role, or a recurring character.

Among the many coming characters for Once Upon a Time, the concept of “The Giant” is a little more vague. Jorge’s “The Giant” could be the popular giant from “Jack and the Beanstalk.” This would lead many to questions about who Jack may be. Possibly Dr. Whale?

Jorge Garcia will be the third actor from Lost to appear on Once Upon a Time. Now-regular cast member Emile de Ravin (Belle) also appeared in Claire Littleton in 93 episodes across all six seasons of Lost, and Alan Dale (King George) was Mr. Whidmore from Lost.

We have yet to see what the story will be to introduce “The Giant.” As Once Upon a Time write Jane Espenson said of the magic bean Baelfire used in “The Return,” that some magic beans grow up, some grow down. It could be that Baelfire’s magic bean transports him to the giant’s world from “Jack and the Beanstalk.”

Or perhaps “The Giant” is someone completely different.