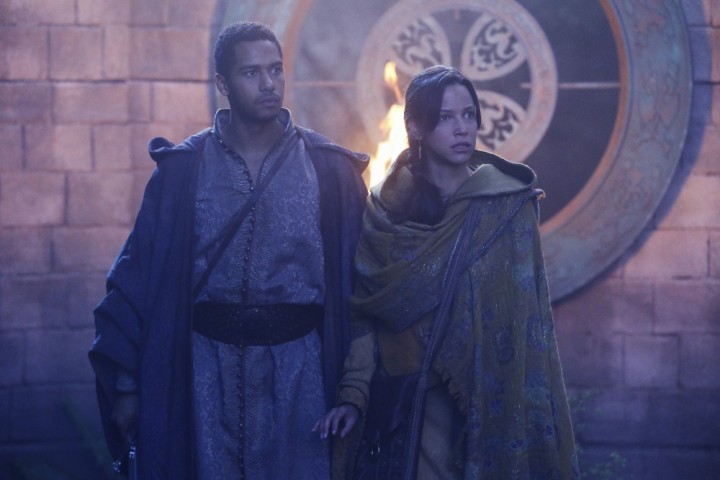 Six weeks ago in Camelot, Merlin took Emma to collect the spark from mankind’s original fire, where Emma must summon and face the darkest force of all time. Meanwhile, hundreds of years ago before Arthur’s time, Merlin met a young woman who ran away from a masked man who ransacked her town and killed everyone, not knowing that the young woman will be the one from whom all the other evil will be born.

In Camelot, Merlin spearheads a mission to reunite the dagger with Excalibur so he can use the weapon to save Emma from the darkness threatening her soul. With Zelena in tow, Hook, Mary Margaret, David, Regina and Robin steal into Arthur’s castle to take the broken sword from the maniacal king. Meanwhile, Merlin brings Emma along on a journey to confront his ancient nemesis and retrieve the sacred spark he’ll need to reforge Excalibur. Both parties are tested, but one suffers a blow that could derail the entire operation. In a flashback to long before the Age of Arthur, young Merlin finds purpose after he is blessed with magic and immortality, but when he falls in love with a young refugee named Nimue, everything changes for Merlin, as their romance starts a chain of events that touches every one of our present day heroes.

These are our first thoughts about this Once Upon a Time episode. We’ll share more about “Nimue” in our upcoming full discussion (usually live on Wednesdays at 7:00 p.m., USA Eastern Time).

Our brains may have exploded with watching this episode. Were not sure if it exploded with awesomeness or if it just exploded in general, but it’s definitely one of those episodes that you’re going to have to go and re-watch a couple of times to really get it straight. Certainly, there were moments where we thought it was really awesome but at the same time where we ask what is going on. That being said, there were definitely some moments where pieces of the puzzle finally fell into place after five years. It was nice to see a lot of backstory and mythology finally come together after so long.

One of the things that stood out to us is it start 1000 years before the age of Arthur. We’re perfectly fine with 1000 years, what we didn’t like is when they said 200 years earlier, which was when Nimue became a Dark One. However, we know that Rumplestiltskin has been the Dark One for at least 200 years, which is a little bit messed up. Anyone who are just as confused about the timeline as us? If you want to check out the awesome timeline that Keb has put together, then head over our Timeline page.

We really liked seeing the origin, though. 1,000 years ago that the power of the Dark One-ness was in the Holy Grail, which, as soon as seeing it, we noticed it looked a lot like the dagger; it’s got the same patterns on it and such, but what we don’t like about this is it’s not quite the epic story as the Apprentice had told it. He said that a long time ago, the Sorcerer battled the darkness and tethered it into a person that could be controlled with the dagger. But Merlin didn’t actually battle anyone, it was more of battling it metaphorically.

Good on everyone who predicted that Nimue will be the first Dark One, especially those who theorized about it even without the help from spoilers.

The last scene with Emma and the Dark Ones with the black hood and red glowing eyes was very creepy, but we also like the creepiness of it all. To see them all present, awaiting their potential freedom, was great. We liked how they made the Dark One like a parasite where it moves from host to host. Does that mean that, if Emma will be the last Dark One, she will be the darkest of them all because she’s got so much from the past inside of her? They said there’s someone who could possibly wield both light and dark magic in order to help people. Who’s going to be powerful enough to wield it for good? Henry? After all, he was the product of both light and dark magic. Being born from both sides of the coin, could Henry be the Author, the greatest sorcerer, and be powerful enough to wield both light and dark magic?

It was a little odd that Merlin could drink from the cup and it was because of his gratefulness, that he asked permission? Yet, when the other guy before him tried to drink from the cup, he just poofed, exactly like Sir Kay did. Then again when Nimue did, nothing happened. Why would the Gods allow her to drink from the Holy Grail, when it was clear she was bent on revenge? Did Merlin become the God of the grail? Were they in the Enchanted Forest or Camelot?

It was fascinating, but at the same time, confusing about seeing all the Christian symbology in this episode. Not just like in the story and in the themes, but literal crosses. Christianity wasn’t born in a bubble, there’s a lot of history in contacts behind it. How it gets to the Enchanted Forest gets us a little baffled. Their whole take on this is not that these stories are merely fairy tales, but their take here with Once Upon a Time is that these are actual stories that actually happen in a parallel world and multiple realms. Why are the stories we know differ so much from the reality that the Onceverse is presenting us with? Why is it that the stories we know are so different and that our stories have existed for decades before they supposedly happen in parallel universe that has parallel time?

One thing that hasn’t been addressed in this episode is that even though this episode is called Nimue and it’s all about Nimue, they didn’t actually show present day Storybrooke characters going to find Nimue. Is Merlin’s voicemail a trick, then? Now that Emma has the completed sword, and with the sword and the dagger reunited, what’s going to happen and how does it tie in with finding Nimue? How did Emma become the Dark One if she has passed the desire for power that Nimue is testing her with? How will they find Nimue and expect to help them when she’s clearly someone who doesn’t have Storybrooke’s interest at heart?

Zelena is delightful in this episode, especially when she tricked Mary Margaret. Do you have any theories about tonight’s episode? Send in your feedback if you found any Easter Eggs, have some theories and other information via email or using the comment section below and join us this coming Wednesday for our full discussion of “Nimue.”