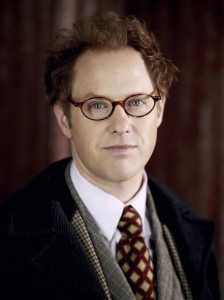 Hear the actor behind Jiminy Cricket and Dr. Archie Hopper talk about his experience on Once Upon a Time, his background, and answer fan questions!

These were the questions we asked Raphael, but you’ll hear that he answered many more, too!

We wished we could have more time with Raphael, but we’re so grateful for the time he gave us (even some extra!).

Raphael Sbarge counts being a father as his best job ever. Outside of that, Raphael has an extensive filmography record, including the Mass Effect videogame series. We’re biased in saying that we love his role as Dr. Archie Hopper and Jiminy Cricket in Once Upon a Time the best!

Please connect with Raphael and follow his other work!

Check out Raphael’s charity Green Wish: “helps local, green, organizations fund projects for their communities through donations at retailers and from concerned neighbors like you.”

Learn about On Begley Street (also on Facebook), the web series and initiative led by Ed Begley Jr. [twitter follow=”onbegleystreet”]