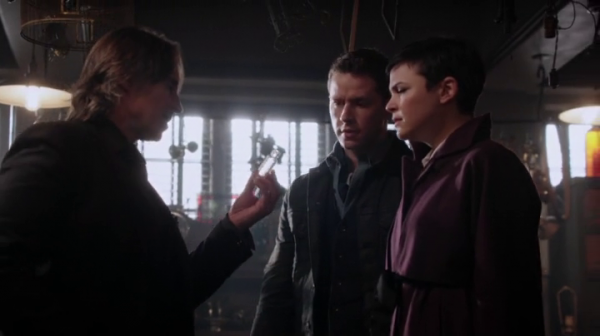 With the threat to Storybrooke looming, we get to see why some people are afraid of the shadows.

Emma, Mary Margaret and David go in search of Regina when they discover that she—along with some magic beans—have gone missing. But against Neal’s protests, Emma still believes that Tamara had something to do with Regina’s disappearance; and Mr. Gold contemplates telling Lacey the truth about his ability to conjure magic. Meanwhile, after Rumplestiltskin abandons his son and lets him travel alone through a portal, young Bae finds himself back in 19th century London and is taken in by the Darling family—befriending their daughter Wendy.

These are just our first thoughts about this Once Upon a Time episode. We’ll share more about “Second Star to the Right” in our upcoming full discussion live on Wednesday, May 8, at 8:30 p.m. (EDT/GMT-4).

Some of our interesting discussion points (in no particular order)