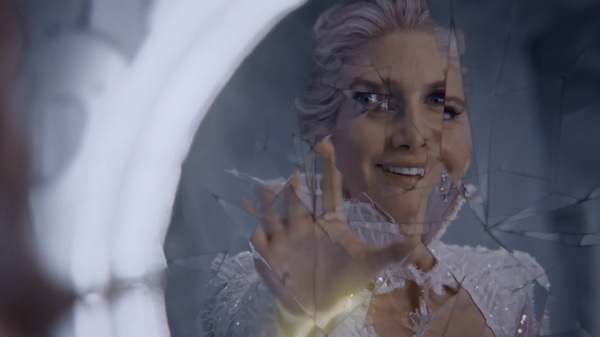 With Emma’s powers getting out of control and hiding from everyone else, Rumplestiltskin took advantage of the situation by leading her in the abandoned manor to help Emma with her affliction. Robin Hood, meanwhile, employed Will Scarlet to try to help Regina in finding the author of the storybook, only to find out that Regina may not be doomed to suffer after all. Back in Arendelle during the past, Ingrid did whatever it takes to get her happy ending—the kind she haven’t known for a long time, even if it means embracing the villainess inside of her, leading her to cultivate and casting a spell very much like the Ancient Norse legend in her book.

Erin is unable to join us tonight but she’s currently in a place of awesomeness (ie; Steveston) but for now it’s going to be just Daniel and Jeremy tonight sharing full discussion of Smash the Mirror.

We’ve watched it three times and we still think it’s one of our top five favorite episodes of the season, and probably top ten of the entire show. We love the excitement whether Emma’s going through the door, and their effective use of different montage in the scenes. 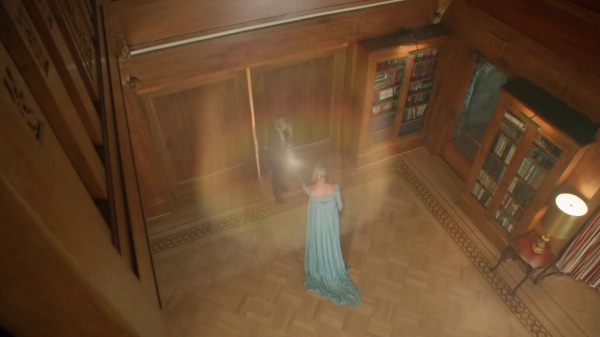 The big thing that Emma learned that we’ve already heard before that Emma supposedly had learned before, which is to “embrace who you are.” Back in season 3A, in Neverland in the episode The Lost Girl, Emma had to admit that she was an orphan in able to find Henry. These people embracing who they are and using it to accomplish something; Emma should have learned that already, and although this was a different situation, but apparently, it seems that the thought hasn’t sunk in her yet. 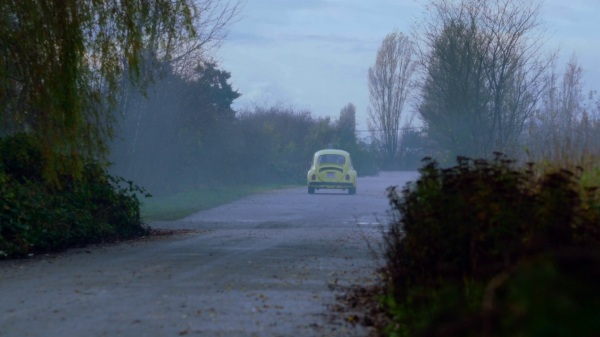 When Emma was driving down the road, we thought, and perhaps other people thought so, too, that Emma might be leaving Storybrooke because the road looks the same as the one in the episode, Going Home. But before she left, Emma went up to talk to Mr. Gold, he said that taking away light magic will be permanent. Listening closely, is he telling her any direct lies? What with all the things he told Emma, why did Emma believe Gold so easily? Rumplestiltskin did like to play with words, after all. Then again, perhaps Emma wouldn’t have sensed his lies because she was in an emotional train wreck, and Emma’s magic, as per Elsa, is tied to her emotions.

Elsa’s speech about loving the good and the bad in yourself sounds like there was a wishy-washy thing in it. Should we apply that same logic to Rumple? Is it fine for him to be who he is? Is that the point with Belle seeming to be at peace with staying with him? What about all the things that Regina did? However, despite who they are, it was the very thing—embracing who you are—that helped them defeat Pan in Neverland. There might be a grain of truth in what they said, but the wording is probably a bit confusing.

Robin Hood, Regina and the Book 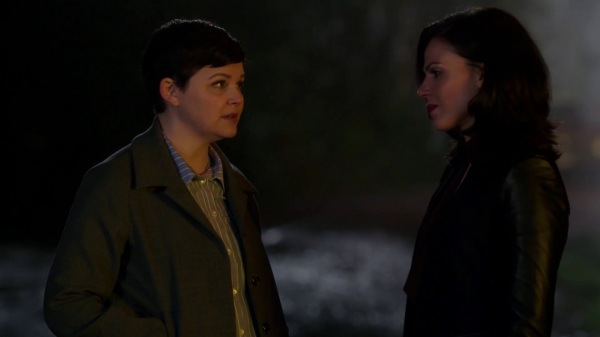 We were still very disappointed with how they threw out all of Robin’s honor and turned him into an adulterer and made Regina into the home-wrecker, as she accused Mary Margaret in season 1. Another thing that bugged us was when Mary Margaret and Regina was talking down the road when Mary Margaret told her that she wasn’t the only one who have slept with a married man. Was she talking about David when they were curse? On the other hand, the main theme between all these is the idea of hope; even if you are a villain, there is still hope for a happy ending. It was nice to see the creators bring it up, and yes, in some way or another, you can get forgiveness and a chance at grace.

Again, and this time it was Robin Hood who said it, that book was imbued with magic, and Storybrooke started with the clock tower. Why don’t they just drop Maid Marian to the well? We haven’t seen it for a long time, maybe it will undo the Snow Queen’s freezing
curse. 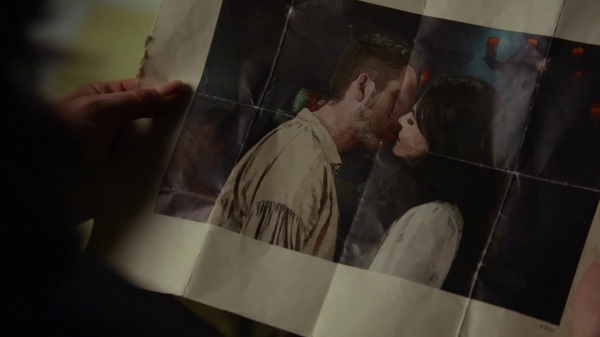 How did a new page appear in Robin Hood’s backpack folded up? Was the library magicked? Or was it the book? 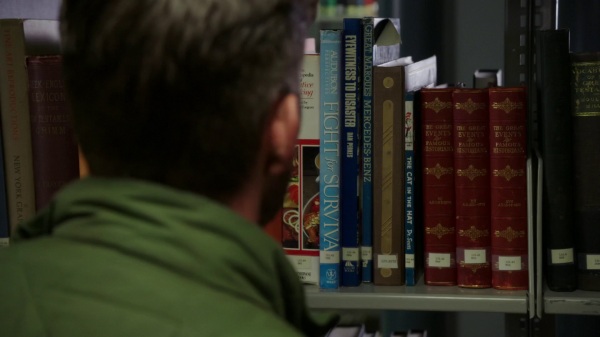 We look closely on the books in the library and found the following:

It was a nice nod to Once Upon a Time in Wonderland when Will said, “Why would a cat want a hat?” and “I’ve seen stranger.”

Are they trying to make some vague allusions to some questions about God? Like when Regina questions whether the author of the Storybooke is an he, a she, or an it; when Mary Margaret said that “things are not that simple”, or when they uttered, “whoever’s guiding this seems to think it is.” 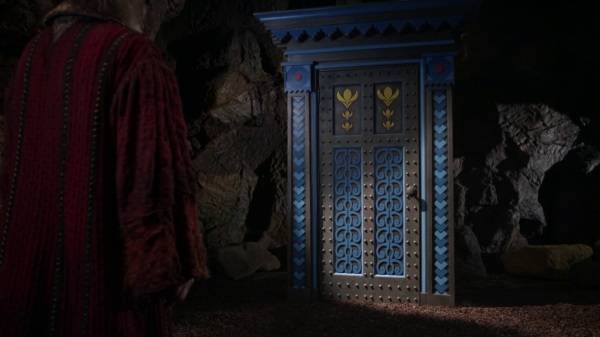 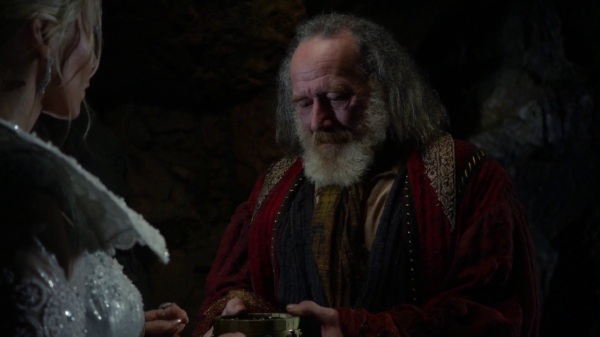 It was interesting to have a second important plot interfering with both the main villain and the heroes. Can the hat be the Sorcerer? Was it possible that the Sorcerer himself made the hat, but got sucked in it somehow?

I kind of am thinking along the lines of the idea brought up that maybe the urn is kind of like the genie lamp where they were trapped but could move around and maybe practice their magic. Or, it could possibly be something like the beloved burning room from the sleeping curse. Maybe the urn transports the person into a netherworld where the person is alone but has room to practice magic, or something similar. The Snow Queen seems to have been in the urn for 20 years or so, but since Elsa was brought to the future, she could have only been in the urn for a few weeks. This would explain why she didn’t really have that much of a change in demeanor, but Ingrid did.

It was finally nice to see Gold use the dust from the urn, referencing it to the deleted scene back in season 3. However, they seem to be breaking their own rules with the dust. The things that we’ve learned from the urn is that it can remove your magic or it can just capture a magical being; magic wasn’t supposed to be able to get out of the urn. When Rumple sprinkled the urn dust around Ingrid, it was clear that she was trapped in there. So how can she project herself to Emma and send magic projections through the mirror? Fortunately, they explained why didn’t Ingrid just used the ribbons right after she got it from Rumple.

How in control is Ingrid now? She did say that she wields the magic of her sisters, including Emma’s true love. Could it be strong enough to defeat Rumple? 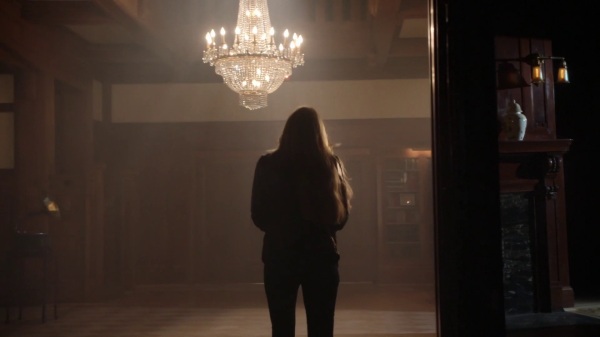 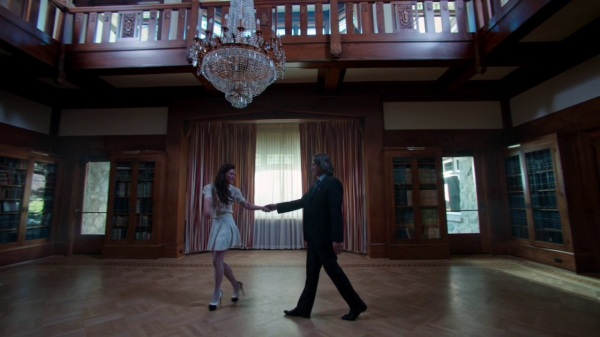 Why did Rumple chose their honeymoon mansion to help Emma with her affliction? Why not go to the woods and destroy it instead? Was it because it was the same place the hat was found? Did Rumple think it was the only place he know he could take the Savior magic?

One danger that put Rumple at risk is when he confessed to Emma that now knows that he will never change, as well as always ends up undoing the good. How much was Rumple controlling Hook? Emma can tell that something was off, but couldn’t tell what. With Hook’s heart under the control of Rumple, Rumple no longer has to blackmail Hook. Now, Hook has become Rumple’s puppet.

Back in Arendelle, Elsa and Anna seems to keep talking about their parents; how they want to remove Elsa’s magic. But was that really why Gerda and her husband went to the Enchanted Forest? Perhaps we’ll discover that Elsa’s parents didn’t actually want a way to remove her magic, but to teach Elsa how to control her magic.

After Elsa got trapped inside the urn by Anna, while Ingrid was practicing the rock troll’s memory magic on Elsa inside the urn, Rumple suddenly poofed the urn out of Ingrid’s hands. If Rumple hadn’t steal the urn, could Ingrid have freed Elsa herself, after all?

Was everything that Anna and Elsa’s parents wanted to say written in Gerda’s note, or have they already learned whatever they needed to know about why their parents travelled to Misthaven? By the way, we love Anna and Elsa’s banter, as well as Elsa and Kristoff’s. It gave us that playful sibling relationship, brother-in-law and sister-in-law banter thing going back and forth hat we didn’t get much from the movie, Frozen.

Is Arendelle still Frozen? Are Anna and Kristoff still inside the castle in Arendelle? Or is Anna actually inside the necklace? Ingrid did say that she spent a lot of time with the hat, but if she gave up the hat to the Sorcerer’s Apprentice before she came to our world, how did she learn everything she claims to have learned about the hat?

It looked like we have already seen everything we have seen in Arendelle, but have we? We’re probably going to get more flashbacks in the remaining three episodes of the third season, but which ones are we getting? Are we going to see more of Arendelle? We’re hoping that this time, we’ll see more of Emma’s relationship with Ingrid.

Ingrid told the Sorcerer’s Apprentice that she wants a perfect match; born with magic like her. Did the Sorcerer maybe influence Emma’s birth? Ingrid also referenced her happiest time as that moment when she and her sisters were chasing the kite, right before she got magic. Does this mean that her happy ending would be without magic? Will the Snow Queen eventually lose her magic?

Now that Ingrid has got the magic of her sisters, to which say they Emma and Elsa could feel. Will Grumpy turn back to being Dreamy again? Will the curse affect everyone? Will Henry go against Regina and Emma? Will Snow and Charming, as well as Regina and Robin Hood go against each other? Who has to kiss who to break this one?

It was nice to get plenty of nods back to all the previous seasons—the heart of the truest believer, Wicked Witch, Peter Pan, Cora, Milah. It was also nice to get some more small tidbits that we noticed in this episode is that Snow White really was a good tracker, as well as more Frozen-related things like the Chocolate Fondue.

Did we miss anything from Smash the Mirror? Share it over the comment section below. You can also start sending in your theories about the next episode via email or by heading over the forum. And remember, there is no episode this coming Sunday, November 23, but will resume on November 30.