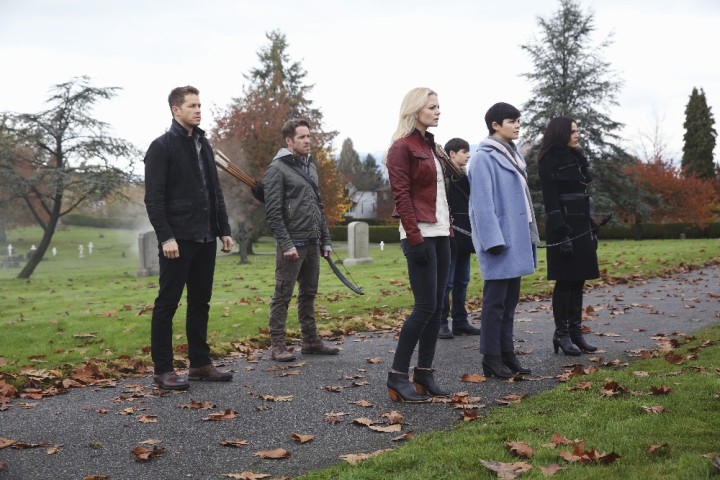 As Emma, with the help of her parents, Henry, Robin Hood and Mr. Gold finds a way to find her deceased pirate, Regina reunites with the one person that always had a hold on her. Meanwhile, back in the Enchanted Forest of the past, prince Henry played with magic he didn’t understand in the hopes of stopping his daughter’s empty pursuit. Join us as we share our initial reactions for the 100th episode, Souls of the Departed.

Emma, Regina, Mary Margaret, David, Robin, Henry and Gold arrive in the Underworld, on a mission to rescue Hook, only to discover that their search will be more difficult than they had anticipated. The inhabitants of the Underworld—all souls with unfinished business and many with quite personal vendettas—hound our heroes at every turn. Meanwhile, in an Enchanted Forest flashback, a familiar face from the Evil Queen’s past returns to present Regina with the perfect birthday gift.

These are our first thoughts about this Once Upon a Time episode. We’ll share more about “Souls of the Departed” in our upcoming full discussion (usually live on Wednesdays at 7:00 p.m., USA Eastern Time).

Because Jeremy is out travelling right now, filling in for tonight’s initial reaction will be Jenny while Jeremy is away for a couple weeks.

There was a lot in this that was pulling all the emotions out, as well as moments that we felt like cheering because we got to see certain characters again like Neal and Peter Pan; Cruella was hinted at although we didn’t see her yet; Cora, which is one of our favorite villains from Once Upon a Time, along with Peter Pan, knowing that it’s very likely that everyone in the Underworld who is a villain has unfinished business. We also loved seeing the Blind Witch again, but we were kind of hoping to see Graham there. Does he have unfinished business?

For clarification, the Underworld we now know is neither heaven nor hell. It’s this limbo place, where, when the people are in here they have the ability to go either place. Apparently, the Underworld is truly dangerous, and we didn’t discover why until the end of this episode. They picked a good actor for Hades. It’s not quite James Wood, but Greg Germann plays the part very well. We were prepared to think that Cora was going to be the villain for this arc, but turns out she was merely an agent for Hades.

Did Cora do a bad thing? If Regina had left, that would have been selfish. But if she had stayed, then her husband would have to go through the fire. That being said, it was nice seeing tiny Henry Sr. again. Seeing him also legitimizes the flashbacks a little bit because back in season 1 episode, Hat Trick, Regina went to Wonderland to get this little box and she gave him the mushroom to make him big again. In the episode, Regina said that the Queen of Hearts had taken Henry for leverage against Regina, and we’ve always wondered how did he get there. We’d theorized it a certain way, like maybe Cora went back to the Enchanted Forest, stealing Henry and going back to Wonderland.

This episode has some of the creepiest things; the mirror grabbing Regina reminds us a little bit of the original horror movie, Poltergeist. The zombie-looking Hook was pretty weird; he looks beat up. However, it was neat that Henry Sr. got to meet Henry Jr. Despite being in the Underworld, there were plenty of special moments in this episode.

What’s their mission now? Are they going to give everyone in the Underworld a happy ending? Help them move on? Let them finish their unfinished business? Or are they thinking about taking everyone out of the Underworld and back to Storybrooke? What does Hades gain from having people in his purgatory? Just control and power over people to do his bidding?

This episode also legitimized something else that we’ve seen in the past, including one of the filler episodes that we’ve seen earlier in the season, The Bear King, the one where we saw Merida using the magical ale of Sinead to talk to her dead father. In the episode, we’ve said back then that we hope that ale comes into play again in the future. Turns out it’s the same ale that they’ve used the same ale to try and communicate with Henry Sr. and Hook. But, where was Hook? Are there multiple underworlds? Does each of the rivers down with Hades go to different Underworlds or other dimension of some sort?

Why didn’t they look for Hook down the docks or the Jolly Roger? Who else are we going to see? How much more are we going to see of them? Are we going to see more of Cora and Peter Pan? Was Cora being turned back into a miller’s daughter kind of a send off for her? Have they been sent back to the Forgotten Character Island in the Underworld? What’s going to happen to these villains that are there? Are they going to a better place? To a worst place? Or back to Storybrooke even? Will the whole of the Underworld be destroyed in some way?

Big congrats to Once Upon a Time for making it to 100 episode, and in case you haven’t heard yet, Once Upon a Time has been renewed for a sixth season. Some people might not like that, some people will be thrilled with that, but what we’re hoping is that this will give them a chance to tell the full story they want to tell. We don’t know how long season 6 will be, but this will give the authors the chance to complete this story arc and potentially bring Once Upon a Time to a complete close. We’re not saying we want the show to end, but we do want them to know because know how many episode they’ll have left really helps the story development.

What do you think about the 100th episode? Did you see any Easter eggs that we missed? Send them all in including your theories and feedback and join us for our full discussion of Souls of the Departed this coming Wednesday!