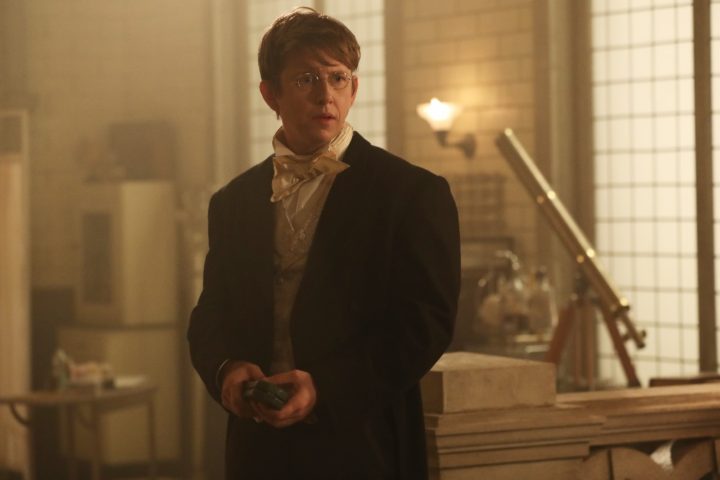 How Rumplestiltskin is treating Belle; one theory that we got right, which is of how to defeat the Evil Queen; plus two familiar faces that we have seen before! Is Regina really going to die? Who will be the new villain? And more in our discussion of Once Upon a Time’s “Strange Case.”

The Evil Queen and Hyde continue on their quest to steal Dr. Jekyll’s serum; Snow looks forward to her first day back as a school teacher; and while Emma looks forward to Hook moving in with her, Hook finds himself trying to protect Belle from Mr. Gold, who has made sure she can’t leave the confines of the pirate ship.  Meanwhile, back in the past, Rumplestiltskin helps Dr. Jekyll complete his serum to separate a man’s personality into two – good and evil – but his help comes with a hefty price.

These are our first thoughts about this Once Upon a Time episode. We’ll share more about “Strange Case” in our upcoming full discussion (usually live on Wednesdays at 7:00 p.m., USA Eastern Time).

This episode was so good in its dialogue between Rumple and Belle that we thought it’s a Jane Espenson episode, but it’s not. We had a couple of laugh out loud moments, which is becoming more and more rare in Once Upon a Time, so we enjoyed that. We don’t like what was said and what had happened between Rumplestiltskin and Belle, but the quality of the development there was good. It was so accurate when Regina said that for Belle, it’s always been one prison to another; Even though Belle was free, she’s not really free from him, still stuck in the prison of that abusive relationship. Even his talk at the end when Belle says that threats won’t make her love him again, even if she does go back to him out of necessity, it’s not love. At this point, the way that Rumple is treating Belle is a form of abuse, it kind of makes us not want them to work things out. Ultimately, we want them to work things out, but Rumple has some serious changing to do. However, Belle had abundantly made it clear that Rumple cannot, will not, and has no intention of ever even trying to change for her.

Rumple made it sound that he want the serum so he can remove the love from him. Cora found a way so she pulled her heart out, which kept her from having any feelings. Maybe he thought that wouldn’t work on him for some reason so he needs the serum. At first, we thought he wanted to pulled the darkness out of him, which would have been more admirable. We also wonder if this means he is back to wanting to cleave himself from the dagger.

There are a lot of great twists in this episode that we really enjoyed. They kept coming right until the very end. But the whole Dr. Jekyll being the villain kind of thing and accidentally killing her, the way they filmed her looks like he pushes her off the window, but we don’t think it was Jekyll’s intention. Plus, Jekyll coming to Belle and trying to hurt her to get back to the Dark One feels like it came out of nowhere. Despite of this, “Strange Case” is the best episode of the season so far.

Very surprisingly and how quickly they moved the story along like Zelena said; it’s only the 4th episode and the villain is already defeated, which was a lot like in season 4 when we initially thought that Elsa might be the villain, but it turned out to be the Snow Queen. Plus, we’re kind of back with season 1 villains too; Rumplestiltsin and the Evil Queen.

So the only way for the Evil Queen to be defeated, or at least what they’re telling us in this episode, is to kill Regina, which is something we’ve theorized before. But it was disappointing to see our theory debunked was what we thought was a really good theory, which is Jekyll being the fake and Hyde being the original. Is Regina really going to die? What if they found a way to tether them back together, so the Evil Queen can go back into suppressed Regina so they can live as they were? Even without Dr. Jekyll to create the serum, they’ve got Dr. Whale now, and the rock that can help them extract the serum.

The other new character that we got in this episode is Princess Jasmine, played by Karen David, who also played Princess Isabella from Galavant. We knew she’d be Princess Jasmine right when we see her. As soon as we saw the staff, we thought that it was Jafar, but it’s still the Oracle. Moreover, this episode gives further evidence that the Oracle is actually Jafar in disguise because of the way she’s using the staff, and the way this episode makes her out to be kind of villainous.

Now that Jekyll and Hyde are dead, who’s going to be the new villain? Once Upon a Time always needs a villain, so who’s that going to be? Probably not Aladdin because he’s the Savior, but it’s possible that it’s Jafar, especially of how well they cast him. Jasmine and the Oracle seemed to be allied looking for Aladdin, but for what? Revenge? Love? What if Jafar is only one threat, but the other threat is Princess Jasmine?

Did Robert Carlyle get a haircut for another show and they just decided to incorporate that in his character?

So who’s gonna steal the hair of the dark one to make a curse?

Bobby shaved his head for Trainspotting 2 before he filmed OUAT Season 6. He was wearing a wig for the past few episodes.

What do you think? Who is the new villain? Is Jasmine a villain? How does Aladdin play into this? We want those theories! Send them to us before Wednesday afternoon and join us for our full discussion of “Strange Case” this coming Wednesday!