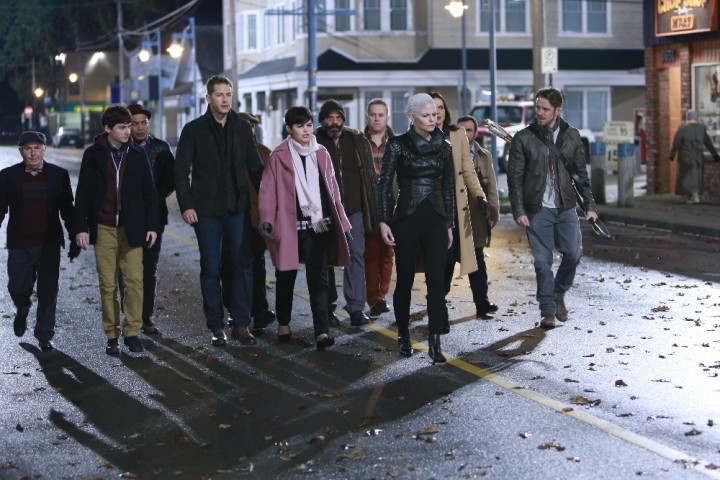 Why did they just give up and went to Granny’s and ate because they realized there’s nothing they can really do? If  they’re going to the Underworld, will they bring some more back, like Graham, Neal, and a lot of other great characters that we’ve lost on the show that have died? Now that Rumplestiltskin is the Dark One again, can he even be defeated? What happens to the ones that were left in Storybrooke? Join our initial review of the winter finale, Swan Song, and hear us rant about Hook and Emma’s swan song, Rumplestiltskin’s deception, and everyone else coming at Granny’s to come say goodbye after learning that this is a fight they cannot win.

We just finished watching the winter finale, “Swan Song,” and we think we speak for everyone when we say “What the Underworld?” We were split about this episode; there were some moments in the episode that were great, and then there were the other moments.

The dark siege of Storybrooke is underway as all of the resurrected Dark Ones target a living soul for sacrifice so that they can return to the realm of the living. With doom imminent, Gold advises Mary Margaret, David and the rest of the heroes to spend their last fleeting moments enjoying the company of their loved ones. Emma, however, refuses to give up, knowing that she is responsible for righting all the poor choices she made as Dark One – there’s only one problem, Dark Hook. When they face-off with the fate of Storybrooke at stake, Hook’s actions will devastate Emma in a way no one saw coming. In a Fairy Tale Land flashback, the Evil Queen tests Hook’s mettle by forcing him to confront a demon from his past before contracting him to dispatch one from hers.

These are our first thoughts about this Once Upon a Time episode. We’ll share more about “Swan Song” in our upcoming full discussion (usually live on Wednesdays at 7:00 p.m., USA Eastern Time).

The biggest thing that they’re breaking is “dead is dead.” There are so many layers to what was wrong to this story. Why did they just give up and went to Granny’s and ate because they realized there’s nothing they can really do? They completely gave up. Their world view, apparently, is that everybody who dies go somewhere that makes you wish for fire and brimstone, which you could die? What is the point of Emma and Hook sacrificing themselves from going to the underworld and wishing for death for a few more years, but it’s where they’re all headed? We’ve theorized it initially that they’re probably going to the underworld, but we didn’t like the way they’re going. We liked the idea of them going and having to find a way back, instead of bringing someone back, which was their purpose of going in the first place—to bring Hook back. If  they’re going there, why won’t they bring some more back, like Graham, Neal, and a lot of other great characters that we’ve lost on the show that have died? Who’s going to be the sacrifice for Hook? They’d have to trade souls, is it going to be Emma?

We really liked the idea of Emma sacrificing herself because we’ve talked about that since season 1 that the idea of savior means sacrificing, giving your life to save someone else. However, it’s completely bleak and hopeless and made absolutely no sense when Emma decided to sacrifice herself again to delay the inevitable of everybody ending up in the underworld.

How can their idea and world view be that absolutely everyone ends up in the underworld when they die? It does not make any sense. What is the point of all of it if that’s how things are? It absolutely removes all hope from the show forever. They said that there will be people in the underworld waiting for them, like Regina and Rumplestiltskin, who wouldn’t be happy to see them. Did the writers not think it enough, in a way, when it comes to this? If they’re going to the underworld to bring Hook back, then, theoretically, yes they could bring back other people, too. If they bring back people, why can’t they bring back a lot of our heroes in the series, with everyone back together again in this world they created so that they could find each other?

Are we going to get a scene where Emma can only save one person and she sees Killian and Neal? Maybe Graham will be there, too, or even Walsh? We do like the episode, but there are definitely some parts of it that we don’t like.

We thought that that was a really beautiful moment between Rumplestiltskin and Belle, up until Rumple became the Dark One. Does this concur that he will forever be the villain? Is that it for him? And now Belle’s with him, once again deceived, can we expect a new baby in town for the next half of the season? Plus, now that he is the most powerful bad guy, he has all the power of the Dark Ones including Emma, even the dagger looked different. If he had the power to create the dagger and make the magic again and become the Dark One again, why didn’t he do it so that he didn’t have something for which he would want to cleave himself off of? Can Rumplestiltskin even be defeated? Is his soul going to be the soul that’s going to be exchanged to save Hook?

This has been a great half of the season; we were enjoying it until it started to feel like it was not going where it started. Will we see Lancelot again? Can the Lady of the Lake pull people from the Underworld without it costing a soul? Is Guinevere still affected by the sands of Avalon? Do they have their memories back? Where does Merida end up? Will their story continue for the rest of the half of the season? Can Merida communicate with them using the magical ale? Is the Underworld the new burning red room?

With all of the heroes gone, Rumplestiltskin in the loose all powerful again in Storybrooke, and Arthur still wants to turn the town into the new Camelot, what will they come back to when they do from the Underworld? Will everyone who were left in Storybrooke take over the town?

There are some really interesting parallels between young Killian and young Rumple; both have been abandoned by their own fathers. Did Killian’s father actually have changed? Although it was cool, it was a little disappointing to see all the Dark Ones just suddenly resolved that quickly. Shouldn’t there have been darkness coming out of Emma? We would’ve bought it a little bit more if they have shown her darkness being pulled into the sword, as well. As far as the big menace that we’ve been working up to, it was disappointing not to see even a glowing eye in the Dark Ones, except from the ones we already know; The whole snuffing out of the light didn’t come into fruition.

On the other hand, a few of our favorite moments of the episode was Zelena’s one-liners, and Emma appearing into her red leather jacket again. It was very symbolic, but we didn’t have as much of a reaction to Hook dying because it felt like that was where the story was going to go and that he wouldn’t stay dead, anyway. It does really rip some of the emotion away from his death. It kind of cheapens, what happen, Hook’s death. That being said, we love and hated Hook’s death. It was beautiful and ugly at the same time. It was done well and, in a sense, if we were to have gone back and sort of rehash it, Hook did kind of get his revenge without getting revenged; He killed the Dark One, but it didn’t happen.

There were a little bit of swinging with the last two episodes, but what do you think about the mid-season finale? Will this be the last season of Once Upon a Time? Send us your feedback and join us this coming Wednesday for our full discussion of the episode, Swan Song!