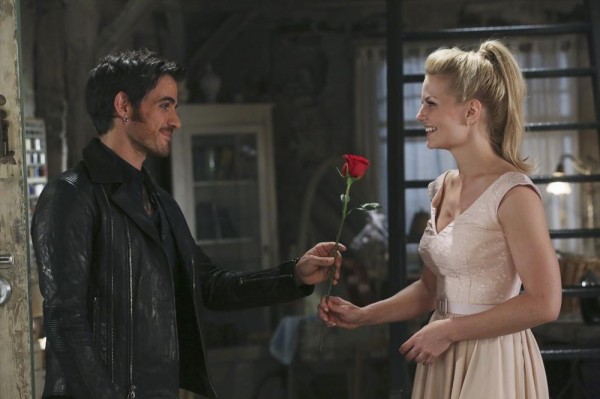 In order to get answers about her parent’s quest to Mist Haven, Anna made a deal with Rumplestiltskin, where the Dark One sent her to the alleged devour of children to acquire a magical box from a prickly old man. Will she embrace her inner darkness? Or is she too nice to heed the Dark One’s deal? At present in Storybrooke, however, Emma and Killian’s first real date was interrupted with the Captain’s worse nightmare when he made a deal with the Mr. Gold to reattach the very thing that gives him permission to be the man he once was.

After Emma asks Hook out on a real first date, Hook visits Mr. Gold and asks for his hand to be reattached so that he can embrace her with both hands. But magic always comes with a price. Henry and Mary Margaret try to offer hope to Regina when she becomes frustrated over not being able to find a cure to save a frozen Marian, and Will Scarlet attempts to break into the Storybrooke library to find a special book. Meanwhile, back in the Fairy Tale Land that was, Rumplestiltskin is after a magical box that the Sorcerer’s apprentice is guarding, and he may use Elsa’s sister Anna to help him get it.

These are just our first thoughts about this Once Upon a Time episode. We’ll share more about “The Apprentice” in our upcoming full discussion live on Wednesday October 22 at 8:00 p.m. (EDT/GMT-4).

We love how they show us something older than everything else we’ve seen before in Once Upon a Time, which was the Dark One before Rumple became the Dark One himself. Although we don’t know how long Zoso became a Dark One, this is, by far, the oldest scene we’ve seen of the show timeline wise. Initially, we thought we would see how the Dark One was originally created but still, it was one of the most awesome episodes that we were fortunate to see and learn about this box that has the hat. Nonetheless, it was cool to get to see Zoso again and learn about this box that has the hat.

In this episode, we learned that the hat doesn’t actually holds whatever sorcerer is behind it; Yen Sid, who was the proper sorcerer for the apprentice according to Disney’s Fantasia, or could it go back Merlin, since they’re being Disney-esque with this even having the hat having stars all on it. But which way are they heading? Yen Sid or Merlin’s? Merlin is a very traditional wizard, after all. In the newer Disney movie The Sorcerer’s Apprentice with Nicolas Cage, the story starts with talking about Merlin, but it was cool to see the walking mop, or in this case, broomstick. However, someone may need to teach Henry how to sweep.

Speaking of Henry, we were kind of surprised that he didn’t even negotiate to his grandfather about payment, now that he’s his apprentice. However, he seems to be conning Mr. Gold a little bit, which is kind of disingenuous of him. Looks like Rumple’s only grandson is becoming a bit of a mongoose now; manipulator but smart.

Does Mr. Gold having a happy ending really did switch his fate? Or does it just make him more greedy? He said that he wanted to be free of the Dark One’s curse but keep its power at the same time, after all. Does him switching the dagger from the fake one to the real one really talks about him being a changed man?

It was lovely to see the Dark One’s contract deal again! The last time we’ve seen it was when Cinderella made a deal with him in the episode, The Price of Gold back in the first season, which backfired by the way. But why is Mr. Gold denying that he doesn’t know Anna? Hook, on the other hand was looking good with his old hand back.

Hook’s having his hand back reminds us of when Dr. Whale asked Mr. Gold to reattach his arm in the episode “The Doctor” during the fifth episode of the second season, but Hook asking him to switch his hook with his hand seems to have a deeper meaning and significance.

It was nice to see Michael Socha as Will Scarlet again and we figured, for a second, that he was after the book Alice’s Adventures in Wonderland. When Emma showed him the book, it was seen that the page to the Red Queen has been ripped from the book. Are we going to get the story as to why he happened to be in Storybrooke and not in Wonderland, where Anastasia was? If you haven’t seen Once Upon a Time in Wonderland, come and check our Wonderland podcast so you can catch up with its episodes.

We also got a reference of Van Winkle, which we first saw in the Once Upon a Time third season DVD/Blu-Ray feature, which at the time, didn’t make sense.

In the one scene that we saw Snow Queen, she seems to be leading Emma to somewhere, but where? Was she luring her away from everyone else so that they could catch up and talk about their past? Did she hurt Emma in the past?

We got to see a neat character, the Sorcerer’s Apprentice, but now he’s gone when the hat absorbs him. Does that mean that he has become a magical being after all? And is this them breaking the laws of magic again? Rumple told Anna that the Dark One’s power have its own limits, however limited. If he absorbs the magic in the hat, what is he planning to do? Bring back his son? Looks like Rumplestiltskin is still dealing with his nasty habits.

With the box absorbing magic to the hat and adding stars, who will Rumple steal magic from next? Regina? The Snow Queen? Who or which magical powers will Mr. Gold steal next?

The last time they had an open ended deal like this, was with episode 4 on season one, The Price of Gold when Gold told Emma that by letting Ella have her baby, she would owe him a favor, which led us in the Manhattan episode when he asked her to get his son, Neal to talk to him. However, will Hook be easily persuaded to do his bidding? Or can he find a way out of his deal with the Crocodile?

What do you think about tonight’s episode, The Apprentice? Why did Will Scarlet stole the book Alice’s Adventures in Wonderland? What does the Snow Queen want with Emma? What kind of deal will Mr. Gold make Hook do in exchange for reattaching his hook back? Send your feedback via email regarding tonight’s episode or head over the forum to share your theories. You can also put a comment below and don’t forget to join us this coming Wednesday for our full discussion of The Apprentice.