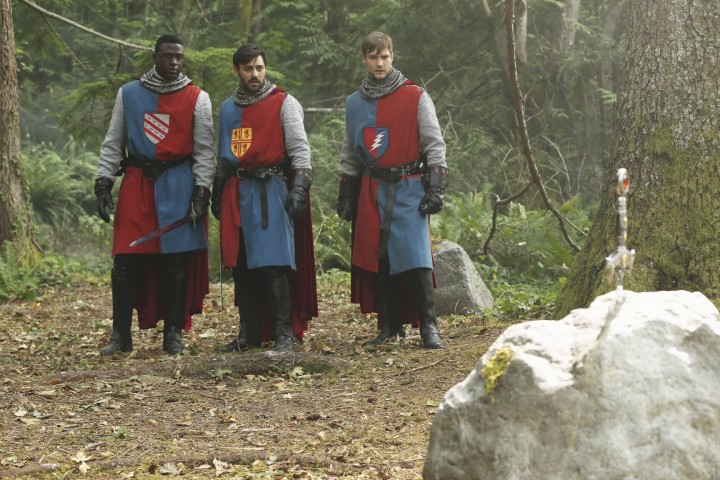 The hiatus is finally over and Once Upon a Time is back with a brand new season! With Emma disappearing in a black void, Regina, Hook and the Charming’s scrambled to find Emma, resorting on their best bet being the person Regina hates most. Meanwhile, in the Enchanted Forest, the fight to control Emma’s darkness starts, resulting her to do a wee magical love tap on a brave young lass. Will Emma enjoy her first taste of darkness?

Immediately after becoming the Dark One, Emma disappears and the heroes must band together to save her, but first they have to find her, which will require the help of an unlikely ally. Meanwhile, in the Enchanted Forest, Emma struggles to resist her dark urges as she searches for Merlin in the hope that he can stop her transformation. Along the way to Camelot, she gets help from the plucky and brave warrior princess Merida, as well as King Arthur and his Knights of the Round Table.

These are just our first thoughts about this Once Upon a Time episode. We’ll share more about “The Dark Swan” in our upcoming full discussion.

The hiatus is finally over and Once Upon a Time is back with a brand new season! With Emma disappearing in a black void, Regina, Hook and the Charming’s scrambled to find Emma, resorting on their best bet being the person Regina hates most. Meanwhile, in the Enchanted Forest, the fight to control Emma’s darkness starts, resulting her to do a wee magical love tap on a brave young lass. Will Emma enjoy her first taste of darkness?

Overall, the Dark Swan episode was like a beating red enchanted heart with a speck of darkness in it. It was very symbolic in so many way. What we liked about this episode is that although there were some things that we kind of knew that are coming, no matter how much we want to try to stay spoiler-free, such as Merida coming into the show, they took a brave new twist with Once Upon a Time this year!

One of the things we noticed about their bringing Brave into the show is that the animated movie was actually made by Pixar, and it doesn’t look more of a fairy tale compared to the other fairy tale characters that we have seen on the show before. However, it was really cool to see Lancelot again, and we are also so excited to finally see Camelot, as well as meet Merlin at some point. But once again, they did yet another time jump and again, people lose their memories.

Not having the seen the rest of the season just yet, it would have been okay for all of them to lose their memories and for the audience to be the only ones in the dark storytelling-wise. There may be some crucial plot points coming up that make it necessarily to lose their memories again but it would have been cool if we were the ones to figure out what happened from the dialogues. At least, there’s not another curse this time as far as we know.

The episode, for us, is enjoyable, but kind of moving a little bit slowly, until everyone shows up at Granny’s, making it fun for us to watch. Then again, it may be a story-telling technique, which they would probably tell through the first half of the season before the Winter hiatus. Will they get their memories back as we go along the season?

But six weeks later, Emma is very much the Dark One, and though she does look dark in an odd way, we can’t help but wonder, why would Emma suddenly not care about who’s who in her life and what they did to her?

We also loved the stuff that happened around the sword and to know that there was some prophecy that Emma wasn’t to remove the sword from the stone. Who was that man who told her not to remove the Excalibur from the stone? Did anyone also noticed that the other half of the Excalibur looked like the Dark One’s dagger? Why go back to that point in Emma’s life? Was the man who talked to young Emma actually Merlin?

Why mustn’t Emma remove the sword in the stone like she was told in the beginning? What if putting the entire sword with that power would just amp up the Dark One power? Who brought them back? Was it Emma or Merlin, because Emma was actually getting close to reuniting the dagger to the sword? Who has the sword?

We love getting to see Team7 really take a stand! What Leroy said was very true, not only in the show but for the cast. They have been in the sidelines before so it’s really neat to see their possibly being much more involved into the storyline, or at least some of them. It was nice seeing the seven dwarves get to join the others go on an adventure, instead of just sitting around in Storybrooke, getting left behind all the time.

It was crazy to see Rumplestiltskin, not as Rumplestiltskin, but more like a bad conscience to Emma. We’re probably going to continue seeing that in the Enchanted Forest for a while, at least until Emma learns to fully embrace her Dark One powers.

What’s going to happen with Zelena and her baby? Where is that whole thing going?
By the way, it was a clever use of chopping off her hand to free herself of the power of the bracelet.

Hook didn’t look himself this episode; too desperate to get Emma back by showing his willingness to do anything just to get to her. When Hook poured a potion on his hook to supposedly rip Zelena’s heart, didn’t Regina enchant his hook once when she asked him to go to Wonderland and take Cora’s heart? Even if he wasn’t able to take Cora’s heart then, he already took that one chance when he took Aurora’s heart back in season 2.

What do you think about Once Upon a Time’s season 5 premier episode? How did you find Emma as the Dark One? Send us your feedback and theories and join us this coming Thursday for our full discussion of “The Dark Swan”!