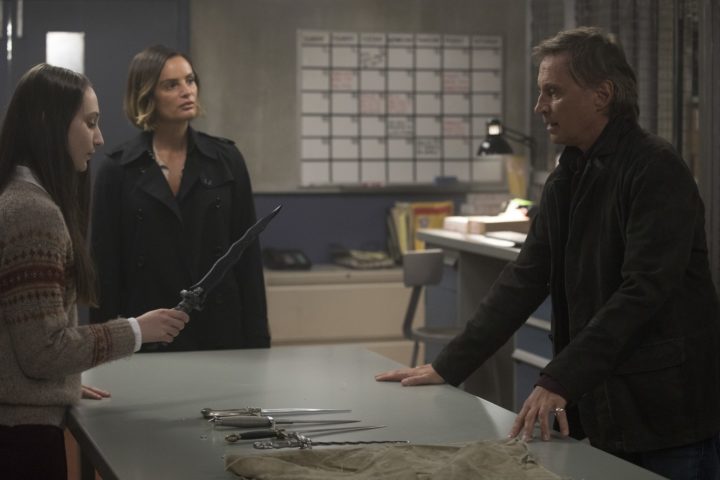 The Dark Curse, the Coven of the Eight, WickedSisters reunion and Drizella’s Mommy and sisterly issues, Henry vs Lucy, plus, a theory about that confusing reason why the heroes are in the old Enchanted Forest! All these and more as we nitpick this double density podcast of “The Eighth Witch.”

Although they packed so much into the episode in just one hour, “The Eighth Witch” was rather enjoyable. They flash forward a lot and still has more to explain but this was a really, in many ways, epic episode. It was very well done, however, the episode also had some very big plot holes and timeline issues. As the mid-season finale, “The Eighth Witch” this episode kind of wrapped up a storyline which was who cast the curse what the circumstance of casting it but without resolving it just yet. We liked the complexity of the story.

While Lady Tremaine may not be enjoyable as a villain having done terrible things this season, she also ended up helping the heroes. But how long is she going to help them? Furthermore, there were also a lot of callbacks in this episode, they threw so much in the beginning we almost wanted them to slow down. There was a big chunk of time missing, what with the birth of Lucy then all of a sudden the heroes were seen in a castle. But why Lucy’s 8th birthday and what does she have anything to do with it? Why does it have to be Lucy’s 8th birthday?

Why keep Drizella as a statue for 8 years? And did they just keep Drizella’s statue in Tiana’s courtyard for 8 years? Why even have Lucy’s 8th birthday with Drizella’s statue around? Was it simply to keep an eye on her? That said, that scene was so well-done and creepy. It was nice because it has been a while to see them do their take on a fairy tale like how it really happened like they did with the Frozen-Snow Queen arc.

It was nice that Regina thought about getting help from Zelena after she woke up from the curse, but how is Zelena in the Enchanted Forest in the flashback? Does this mean Storybrooke still has magic?

It was almost a let down because they went to the poisoned heart magic thing, but at least Henry looked super sick; very effective. In the original Dark Curse, Emma only broke the curse, not bring magic to Storybrooke. It was Rumplestiltskin who brought magic to the town.

The Coven of the Eight

Regina referenced to Robin’s age, however, Henry was supposed to be 18 years old when he left Storybrooke, so how was Robin already in her 20s whereas Henry looked like he’s only in his 30s during the flashback? And how did Zelena get her magic back? Why did they feel it necessary that The Coven of the Eight were witches and not creatures?

We liked the sacrifice that Ella made and leave Lucy alone with Tiana and when they all convened in the stone circle, however, it was hilarious how Drizella said she waited so many years to enact the curse, when Rumple waited for 300 years. Moreover, the curse is still very vague and what it involes. How will they find a cure? Does breaking the curse bring the entire world magic? They’re not even in a contained space in this curse, but is in our world. Even when Henry had everyone wish by throwing a coin in.

If the Coven of the Eight is so bad, why is no one talking about them? Zelena clearly knew about them and was even invited to join in when she found a coin in her porch. Was it the invitation, or did she turn them down a long time ago? We did like the warning shots between Regina and Robin, however. It was creepy, but it was nice seeing Robin shoot arrows in between Regina’s fingers.

Although it was fun to see original Rumplestiltskin again, why is he Rumplestiltskin again? Was it because they were back in the Enchanted Forest? What resulted in him looking like the Dark One again? Why did Alice want to stay with Rumple? What did Rumple give up for Alice? Is Alice somehow related to Rumplestiltskin? Why is he so protective of her?

They said that the white elephant is something that has outlived its usefulness, yet persists, and Rumple finds that personally quite moving, but how does Rumple know that Alice is going to be able to help him with the teacup? How does he know she is going to remember or be crazy in the new world?

Was Regina inadvertently giving Zelena an overdose when she poured the entire potion into the bottle? All of the flashbacks of Zelena that was shown before she wakes up was of her as the Wicked Witch that, for a time, we thought she was going to wake up hating Regina again. In the background of the spinning class when Regina and Henry first ran into Kelly, there was a quote in the wall that said, “Legends aren’t born, they are created,” which is very reminiscent of the series’ popular phrase, “Evil isn’t born, it’s made.”

Why did Regina seek help from Zelena of all people? How important is Zelena to breaking the curse? Was it because of her magic?

This episode was packed, yet all over the place. Mostly in a good way, but there are some things that are still confusing. They all had good lines, even Drizella. That said, everything Drizella complains about seems to not be real; Anastasia literally stole nothing from her. If they are in a Land Without Magic, how did Anastasia have magic?

A lot of the things that happened in the evidence room was interesting, what with Gothel appearing which indicates that Gothel also has her magic back. Does this mean that there is magic in Hyperion Heights, however faint?

Why was the symbol of the Coven of the Eight painted in the troll in the bridge? We did a research about the symbol and found out that it was actually the Aegishjalmr/Aegishjalmur/Ægishjálmr, which is also known as the Helm of Awe and Terror. It is one of the most prominent Viking symbols.

When one studies the Aegishjalmr closely, it becomes fairly easily recognizable as a symbol of protection rather than an offensive one. The central circle represents the circle of protection within which the bearer is safe. This is a representation common to many cultures and is similar to the Magic Circle of protection and invocation used in Wicca. The eight points of the Aegishjalmr are actually tridents, a very common symbol in Hinduism. Shiva, the Destroyer of worlds, is always depicted in Hindu iconography as holding a trident, called a trishool in Sanskrit.

To those who fought by his side, he would be a vision of fearless power and battle readiness, ready to cleave the enemy with his individual weapon and lead them collectively to resounding victory. Soldiers on the opposing side would see a terrifying vision of an invincible warrior that they had no chance of defeating and would lose heart at his very sight.

Is the Coven of the Eight a good coven or a bad coven. If the key to forming a coven is Anastasia, what is Gothel’s end game? What if it’s not good nor bad? Number 8 is a balanced number, the great Karmic equalizer, a force that just as easily creates as it destroys. When the 8 comes knocking, you can be assured that you will reap what you’ve sown. Is Anastasia the one who will equalize the coven? Or do they need her simply to sacrifice her?

Gothel said that the cloaks belong to darkness right now, but soon they will find the women who were meant to wear them. Is that her end game? Are we going to see the rest of the coven?

Are they gearing us up for a series finale? Will there even be a happy ending if they’re graying black and white?

Will there be a third option to breaking the curse this time? Who might sacrifice to save both Henry and Lucy? Regina? Is breaking the curse really going to kill Henry? Or was it bringing magic that’s going to cause his death? However, there is magic in our world already, since Emma dated a flying magic, and young Baelfire was taken by Peter Pan’s shadow to Neverland.

With Regina and Zelena back in town, what’s going to happen the show come back? What does the dead guy with the tattoo symbol on his wrist have to do with the Coven? Is he one of the servants? Are they awake? Does this mean that the Eloise Gardener storyline isn’t wrapped up yet? Will Rogers, Tilly and Weaver prevent what’s going to happen near the well? Will we see the rest of the Coven of the Eight? Now that we know more about the symbol, who did the journal actually belong to? Are we going to see Rumple, Regina, Zelena, probably Hook and Alice team up? How deep does Henry’s belief runs? Will Regina as Roni just going to run around offering shots to everyone to wake them up?