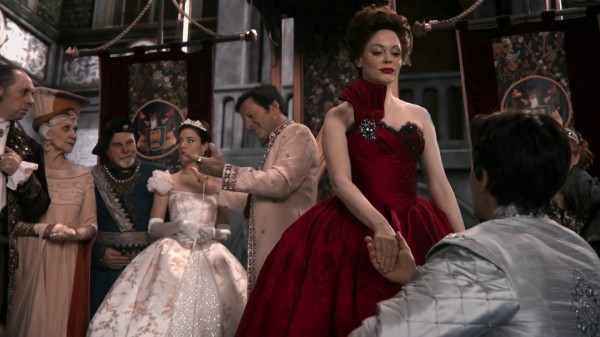 Rumpelstiltskin’s story was presented more as Cora’s story in this episode. A few changes were made but it remained pretty close to the story book versions we know and love.

Rumpelstiltskin introduced himself to Cora, saying she “earned it.” Did she earn knowing his name, or making a change to the contract?

I know the show does not always tell the fairy tales how they are meant to go, but they usually to find a different way to tell it while leaving similarities to the original tale. In this episode, we saw where the tale of the Millers Daughter and Rumpelstiltskin came from, but we have still yet to truly see the part in the original tale where someone has to guess his name in order to go back on a deal. Since they didn’t include it in Cora’s story, I’m thinking the writers could be saving that part for another story to be shown in future backstory.

p.s. I was totally started to sing “Circle of Life” when Cora raised baby Regina up like Simba at the end there

Is Cora the only miller’s daughter that Rumpelstiltskin has made a deal with?

Props to ABC for the cast in this episode.

Rose McGowan was great as Cora, and proved she was already a bitter, miserable woman. She was also older and for that time, a spinster, who had the bloodlust of Rumple. It was why she could so easily take out her heart, and leave Rumple. Personally, I thought she and the King were a good pair. The King also says something along the lines that his son was not that great of a prize anyway. We saw the kind eyes of the Prince, and how it explains his love & devotion to Regina, and meaningless to Regina. He also seemed captivated by Cora, from the moment he saw her, he kept looking back at her, after the flour incident. I look forward to more flashbacks!

Eva was such a brat.

The castle in this episode was different from any castle we’ve ever seen; it’s a new kingdom.

Is Regina related to King Leopold, being Prince Henry’s daughter?

Why was Eva visiting King Xavier and Prince Henry?

Princess Eva was wearing a tiara than either of the ones we’ve seen on her before.

Did young Cora know she was talking to the prince? Did she find him on purpose or by mistake?

When, why, and where did Rumpelstiltskin learn to spin straw into gold?

Does Rumpelstiltskin always have a contract handy?

Why had Rumpelstiltskin asked for Cinderella’s first born? Did he see the future and know that he’d need a bartering chip to get Emma to help him find Bae?

The irony of Cora’s statement, “Well, brides have the be snow white.”

What happened to Rumpelstiltskin’s stage makeup? Was that a flaw, or intentional?

Would Cora have turned out differently had she chosen love over power.

Cora’s pet peeve is insolence. It has always been.

When, and how did Cora gain all her dark power from Rumpelstiltskin?

Lines of succession insight shared by one of our listeners from Georgia:

Order of succession according to Wikipedia

Anonymous listener feedback: Why didn’t Rumpelstiltskin start turning back into a normal man when he and young Cora kissed?

In your initial reactions, you said that because Rumplestiltskin didn’t change back into a human when he and Cora kissed, maybe he didn’t really love her. I think he did, but that there’s a difference between love and True Love. I think Cora hurt him pretty badly when she rejected him at the end (which is probably why he was even more reluctant to get close to Belle in “Skin Deep”), and Cora would have been hurting pretty badly too if she hadn’t removed her own heart.

Speaking of which, the scene at the end when Cora finally got her heart back and was able to love Regina for the first time was very, very sad; I almost cried. But it made me wonder: did Cora love Regina at all without her heart? If your heart isn’t inside your body, is it possible for someone to love? I think that Cora DID love Regina when she didn’t have her heart, but she wasn’t able to love her fully. After all, Graham (sorry) had some amount of love for Emma (some people even say they had True Love) while his heart wasn’t inside him, so it makes sense that people would be able to love even with their hearts outside of their bodies. Cora, sadly, just had a lot of other issues holding her back from being a good, loving mom.

Thanks for making such a great podcast!
—bibliophileemily (bib-lee-oh-file emily)

Love is weakness was a phrase introduced to Cora by King Xavier, and she lived by it thereafter.

Did the ship reappear at any point while Emma, Gold, Henry, and Neil were using it? Or were we just seeing inside the cloak? Can only Cora, uncloak the ship?

That awkward moment when your mother calls your phone tap an “enchanted box” and bats it off your desk. : D

Was Rumpelstiltskin too weak to use magic when he returned to Storybrooke?

Had Cora ever considered becoming The Dark One before this episode?

Was the Jolly Roger visible when it came into port?

SCREEN SHOT JOLLY ROGER BACK TO PORT IN STORYBROOKE

Can Henry jr. see the future? Is that his magical ability? Or was he just being optimistic when he told Emma and everyone, “Don’t look so worried, You’ll stop Cora. You won’t let her get away.”

Mr. Gold totally left out how he planned to get better by returning to Storybrooke. He left out the detail of the candle and having someone use it to kill someone to save his life.

Do Neil and Emma still have chemistry?

Why did Neil get engaged?? He seemed to be waiting for Emma do “do her job” in Storybrooke so he could get back to her.

Why did Rumpelstiltskin/Gold teach the conjuring magic to Cora and Emma so differently. For Cora, he told her to harness her deepest hatred and bloodlust; yet to Emma he encouraged her to summon up her most protective instincts. These are vastly different.

Does Neil’s choice of weapon give us a hint as to who his fairytale character? His sword looked like a pirate cutlass.

How’s Belle going to get her memories back?

Belle’s special ability is to see the good in everything.

Now we know why Rumpelstiltskin considers himself to be an unlovable monster. It’s all because of the 2 women he’d loved before, Mila and Cora, whom had both forsaken him.

Rumpelstiltskin claims that he is “full of love.” Did this strike anybody else as strange considering all he’s done?

We finally got to see where Cora kept her heart. She packed it in her trunk with her socks and underwear haha!

Did Cora seem disoriented when she sensed someone near to her heart? She dropped the dagger when she poofed away.

Snow can be very dark when she wants to be.

Where did Cora send Emma and Neal when she made them disappear or is that even important, are they going to be lost?”

Had Cora gotten her heart back un-cursed, do you think she would have been different? She had a lot of hatred before she took it out.

The Evil Queen and Cora are killing the people Snow loves and Snow is indirectly killing the ones Evil Queen loves. That would be a horrible Thanksgiving. I am happy Mr.Gold lived.