We’ve heard many times in Once Upon a Time that “all magic comes with a price.” Hopefully that price won’t be storyline continuity. 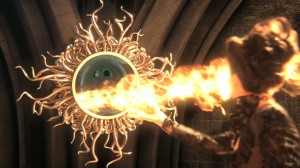 “Bet you weren’t expecting THIS!”

In the past we’ve seen Evil Queen view others through mirrors: one mirror on her side and another on the side of the person being viewed. In “True North,” Evil Queen used this power to see into Blind Witch’s house, where we observed something new: the Queen sent fire through the mirrors. Brilliant! But at what cost to the story’s logic?

This question becomes more relevant later when the Queen views Snow White with the seven dwarves through a mirror. “Now she’s cavorting with dwarves? When did that happen?” Again, brilliant! (At least it was brilliant to those who had been trying to place Snow’s time with the dwarves in the Fairytale timeline and asking “When did that happen?”) However, since we presume that there wasn’t a mirror in the middle of the road in the middle of the forest, this would seem to indicate that the second mirror isn’t required and the Queen can see whatever she wants. This is fine, and something I believe she could do in other versions of the story, but that combined with the demise of Blind Witch begs the question: why not melt Snow White (see what I did there?) right there in the forest, and maybe take out a few dwarves for good measure? 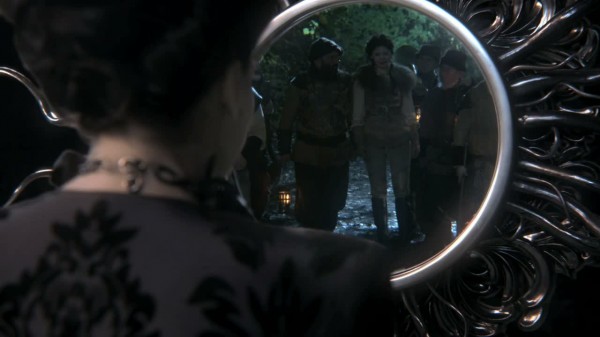 “I don’t think I have to worry about that whole ‘fairest in the land’ thing at the moment.”

And yes, I know it’s just a story, and a story involving fairytales at that. However, in order for a story to be enjoyable the author must suspend the audience’s disbelief. Magic so powerful that all limitations should, logically, be removed threatens that suspension of disbelief by raising too many “Why didn’t she just …?” questions. Sci-fi also tends to suffer from these problems once too many new technologies and creative solutions to problems have been introduced.

Certain dampers on the Queen’s use of refractive magic could be written into future episodes, such as requiring a second mirror for the flame trick or a scene in which Snow notices a random mirror in the middle of the forest and worries that Evil Queen may have seen them. Even without any of those repairs to storyline logic it may simply be that the Queen was still afraid of killing Snow in a way that would indicate her involvement to the people of the kingdom, or that it wouldn’t have given her the flavor of revenge she desired.

What do you think? Plot hole, or no big deal? Share your reflections in the comments.