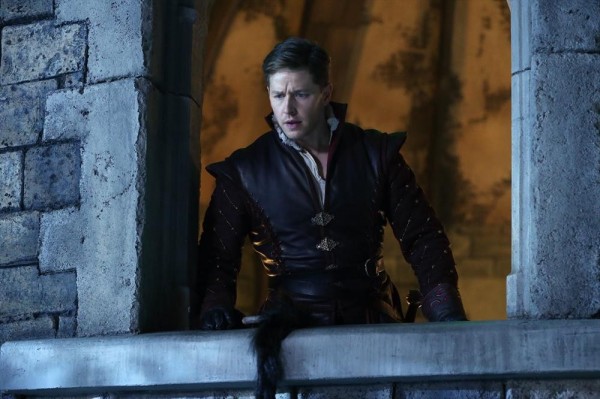 The search for the Wicked Witch continues as Emma, Regina, Hook and Charming worked together to track down the witch’s whereabouts. In the past, a trapped princess lets her hair down as she screams for help, allowing Charming to climb up and attempt to rescue her from a hooded figure.

Joining Daniel in place of Jeremy is Hunter as Jeremy is on a business meeting, but he will back on Wednesday for our full discussion.

What a different episode. It was very creepy, but very interesting. The way the hooded figure crawl from above remind us a lot of the movie, The Grudge. Please keep in mind that these are just our initial reactions so please bear with us if we’re all over the place.

While Emma, David, Regina and Hook continue their search for the Wicked Witch, she, in turn, is planning a dark surprise for David, and Zelena’s prisoner is powerless under her watch as she plots her next course of action against the townspeople. Meanwhile, in the Fairy Tale Land that was in the previous year, Prince Charming stumbles upon Rapunzel, who is trapped inside a tower, and must help her confront her fears in order for her to be free.

These are just our first thoughts about this Once Upon a Time episode. We’ll share more about “The Tower” in our upcoming full discussion live on Wednesday March 26, at 8:00 p.m. (EDT/GMT-4).

One of the interesting twists is Zelena using fear not to kill people, but to steal their courage. What a nice nod to the cowardly lion from the Wizard of Oz. Does Zelena need everyone’s courage or just Charming’s?

What is Zelena’s deals with babies? Why does she want to help Snow so much? Is she planning to just join the gang so they would rule them out as a suspect?

Rapunzel was very different than the original story but she seemed interesting. A lot of people in the chatroom thinks that her brother is Flynn Rider. Is he? The tower where Rapunzel was in looked a lot like the one where young Cora was locked in the episode The Miller’s Daughter. Is it the same castle?

Has Rumple escaped or did Zelena just transferred him elsewhere? Is this a hint that he’s a mortal now because he can bleed? What did Zelena steal in Mr. Gold’s shop? How many people is Zelena going to trap in the inside people and how is she planning to take her courage?

What a nice CaptainSwan scene! Why is Emma so concerned of Neal if she isn’t completely in love with him anymore? Is it just because he was her son’s father? The way Emma and Hook’s conversation went, is he still hoping that he still have a chance of winning Emma’s heart?

On the other hand, Hook seemed like he has something to hide regarding the last year. What does Hook know and not telling Emma and the others? Did he met someone as he was sailing the realms who he has fallen for? Was he tortured somehow and was ashamed of admitting it?

As Snow was about to admit that she was pregnant, Snow already looked like she’s on her first trimester.

It was nice seeing how the show is being told chronologically carefully. Hopefully, they would keep this style of telling the story as this avoid everyone from guessing what is happening in the show.

Is Rumple just acting insane so that Zelena will let her guard down? How much Zelena could do now that she has the Dark One’s dagger? What will she ask the Dark One to do? Does that mean that Rumple can’t hurt her?

Was it Zelena who sent the hooded figure after Rapunzel?

How did Zelena know to get Charming’s end of the sword into her purse? Was Rumple safe?