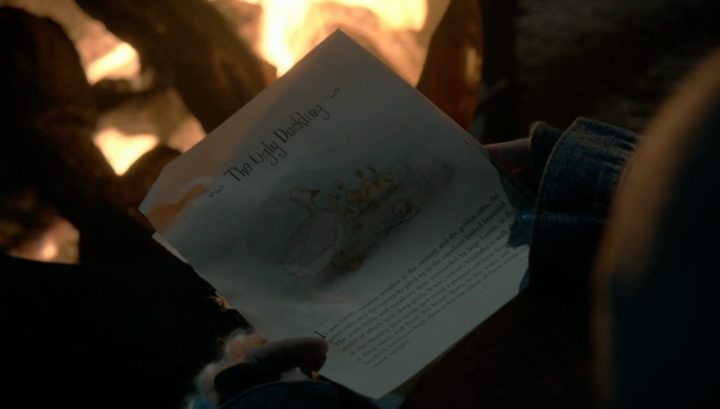 Join us as we discuss this episode, “Tougher Than The Rest” more in-depth, talking about baby Emma, the Wish Realm, and the misguided villain that is Gideon. Plus! Should we keep believing that an actual final battle is going to take place or should we just give up on the idea?

Unfortunately, this episode is, well, tougher than the rest. The Spring premiere episode got the lowest-rated episode (0.7) of the entire series for adults 18–34, according to ShowBuzzDaily. 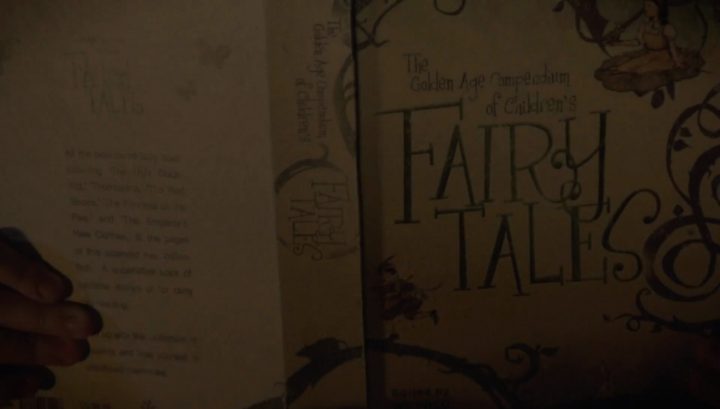 Starting out the episode with a brief scene in the past in Minneapolis in 1990 with young Emma, who was played by the same actress who played young Emma in the episode 5×01 “The Dark Swan,” McKenna Grace. In this particular scene, young Emma was reading  “The Golden Age Compendium of Children’s Fairy Tales” and we tried to look for Easter Eggs and listed on the back of the cover were as follows: 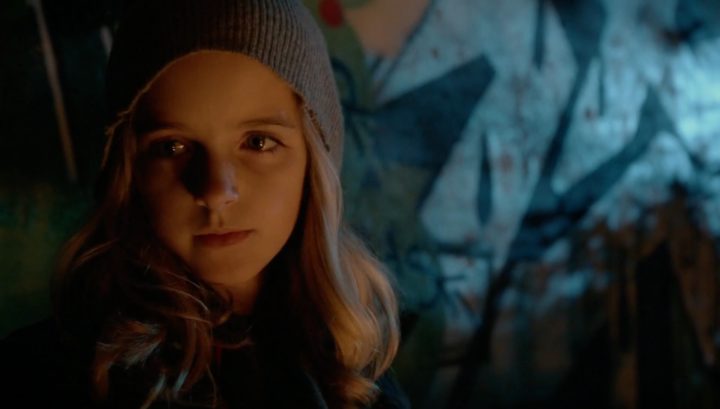 It seemed like she was a little bit rejected by the others, all alone in the cold to fend for herself. August came to visit, but the one thing that doesn’t kind of make sense was that he ran away. So why pop in only for a quick pep talk?

The purpose of using the story of The Ugly Duckling strongly ties in with how Emma got her name. Apparently, this wasn’t actually how she originally supposed to have gotten her name. Back in 2013, Jennifer Morrison said on Twitter that while it has not been shown on the show, the name “Swan” was Emma’s first foster parent’s last name. It didn’t make sense back then since Emma was never adopted if that was how she got her last name, so tying in the story of The Ugly Duckling with her last name makes more sense. 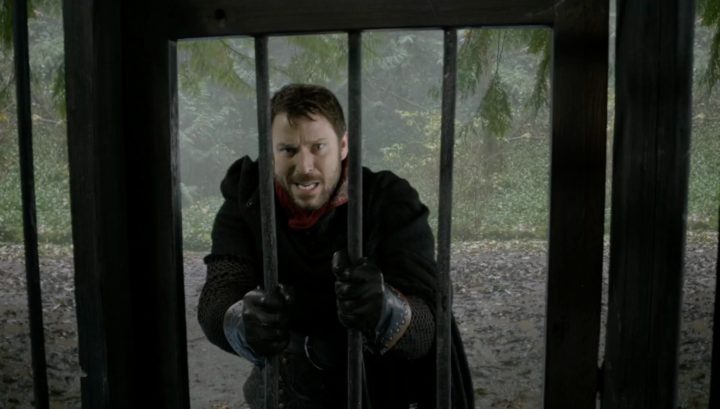 When we pick up right where we left off, Regina did point out that Robin didn’t age, even though everyone else did in this realm. Well, everyone except the Sheriff of Nottingham. We mentioned in the initial reaction about Lana Parrilla captioning Jared S. Gilmore’s image regarding to him as “King” with him wearing a red cloak. 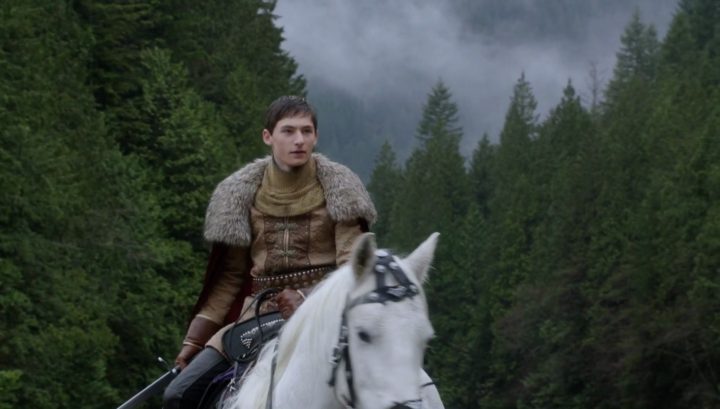 I think Henry is King or in charge because Snow and David are dead and everyone believes that Emma has been kidnapped by the Evil Queen. I think if Emma was around then she would be queen (in the wish realm). The wish realm seems too solid to be a mere throw away world. It is a world with no Savior and a crazy Rumple running around loose. At some point this world might need its own Savior. I wonder if Agrabah is somehow in the Wish Realm. Perhaps someone wished it there and that is why it disappeared from the real world. In that case we will see that world again when we catch up with Aladdin and Jasmine.

Emma then goes to visit Pinocchio and he apparently mentioned that, in this realm, there’s still an enchanted grove. It was neat to see the nice flashback to 3×03 “Quite a Common Fairy” when Tinkerbell pointed Regina to Robin, when Regina went to find Robin after visiting Pinocchio. On the other hand, it was interesting that they have the anti-magic cuff, which was Peter Pan’s creation.

When Emma and Pinocchio went to find the enchanted grove, he talked about how he’s not the master woodcarver that his father was, including his father’s chisel. Was this the same chisel that Geppetto used to carve Pinocchio out of the enchanted wood? 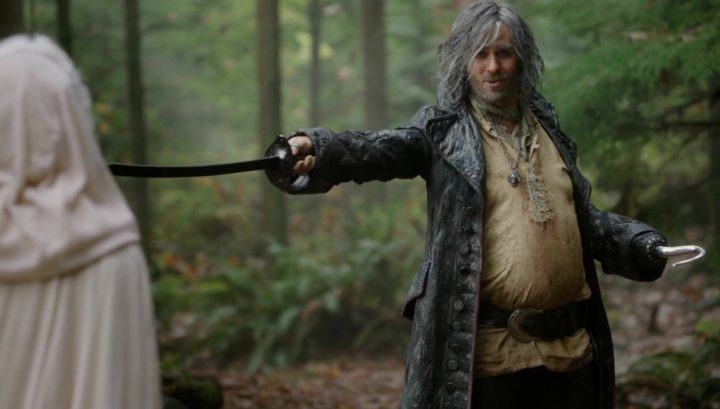 We loved seeing Hook the way he was! He was barely recognizable until Emma regarded him. He must have so much fun brushing the hair out of his eyes.

Meanwhile, Robin and Regina are locked in a cage and apparently, in this realm, what Tinkerbell said that happened to Robin when Regina didn’t follow her advise to go meet him in the tavern came true.

Adam and Eddy were asked if there’s a different version of Belle, and they said that we’d see a version of her we never saw before.

Turns out, it really was a totally different version of Belle because in the Wish Realm, Belle died of starvation in the Evil Queen’s castle. On the other hand, it was interesting that Robin and Regina were locked in the same dungeon where he previously locked Belle in.

Meanwhile, Emma discovers that there was another chisel in the toolbox, and the swan that Pinocchio carved for her. And apparently, Geppetto is the originator of the “fake news” that the duck became a swan. Nonetheless, Pinocchio finished the wardrobe and helped Emma and Regina get back home, and even bringing Robin along with them back to Storybrooke. 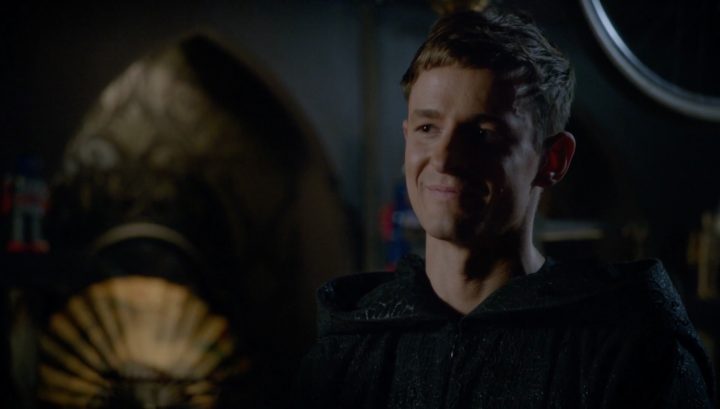 Back in Storybrooke with Charming and Hook walking down the street, and Charming after blood, blaming himself for what happened to his daughter. Why keep Snow White asleep and let her know about what is going on? Inside Mr. Gold’s shop, Gideon explains what he went through, including his womb time. He also talked about the Dark Fairy, who is his grandmother, toughening him up. If time moved differently in the Dark Realm, when did Gideon appeared to Belle when she was under the sleeping curse?

According to Gideon, he needs to kill Emma to make himself the new Savior. Says who?

He is clearly misguided. A question is where did he get the idea that if he kills Emma he will become the Savior? Who told him that? Someone in the Dark World? Perhaps someone who had their own reason for wanting Emma dead? Is there a reason why Gideon and Emma are both seeing the visions? Perhaps someone is putting them into both of their heads. We are still waiting for someone who can balance light and dark magic; perhaps if Gideon can find a way to become a hero without killing Emma he can be the one. I like the idea of Emma mentoring Gideon and teaching him how to be a Savior. She can set him on the path the way Henry set her and Jasmine set Aladdin.

Gideon said he was 28. Emma was 28, on her 28th birthday, when she became the savior and could break the curse. Maybe Aladdin became the savior at 28. Do we think that this has something to do with the prophecy. Maybe gideon will indeed become the savior as he is the right age and Emma won’t die, but like previously mentioned, lose her saviorness because her time is up and another land needs a savior as Gideon said.

So glad Once Upon a Time came back and it was a great birthday present to get to watch the premiere.

Furthermore, in the woods when Rumplestiltskin went to have a father-son chat with his son, it was admirable that Rumple is saying to make him pay. It also seems like Rumple doesn’t want Gideon to kill Emma. Is that because he does not want Emma dead, or not wanting his son to commit murder? What was Gideon doing with his fist before he poofed out?

Back inside the Charmings’, David kisses on the forehead. Why didn’t the kiss worked? Back in season 1, Emma woke Henry and broke the curse by kissing him on the forehead, and Regina did the same thing in season 3. Does curse-breaking power only works on relationship-level-appropriate true love’s kiss? Wouldn’t it be good of him to wake her so she can know what’s going on?

It was surprising that they wrapped the Wish Realm storyline quickly in one day. What wasn’t surprising, however, was Robin coming through with Emma and Regina when they arrived back in Storybrooke. Will this Robin fall in love with Regina, too? One of the things that kind of seems strange is that if Gideon remembers his womb time, wouldn’t he remember Emma being there for his birth, as well? Was Regina still wearing the cuff when she came through? Good thing it didn’t short-circuit the wardrobe.

Does the Wish Realm still exist?

This bizarre reality that was created for Emma; does it still exist now that she’s left it?

We now have someone who in this world should be dead – the universe may push back – so Robin might not be able to stay alive and well in the real world forever – in which case he might have to go back. If the writers are truly devious they might be giving us a wolf in sheep’s clothing. I also hope this is not the way things are going – but I wouldn’t be surprised. 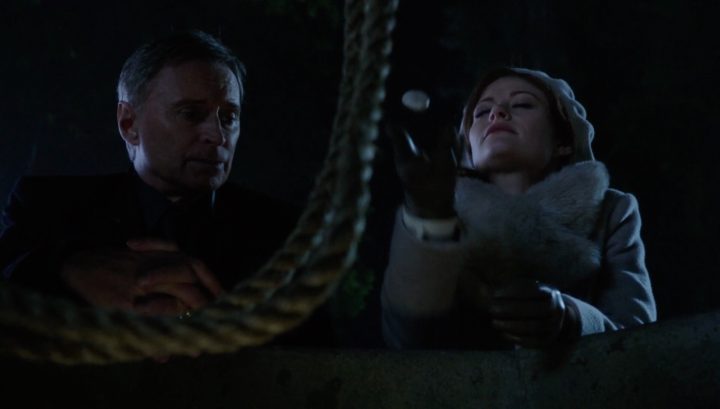 In the well, Belle distinctly said that she’s not making a wish because of bad results, but then it looks like she makes a wish by the end of the episode when she closed her eyes before throwing the coin in the well. Rumple also talked about reaching for the cure for drinking poison. Might he be swaying towards the light again? He also said that if they fail, war is coming to Storybrooke. Is this the final battle since season 1 or should we just give up on the idea? If they are going to set up a war in Storybrooke, shouldn’t it have to be someone more menacing like, say, the Dark Fairy? Share all your theories below or head over to the forum for spoilers and other theories about the upcoming episodes!