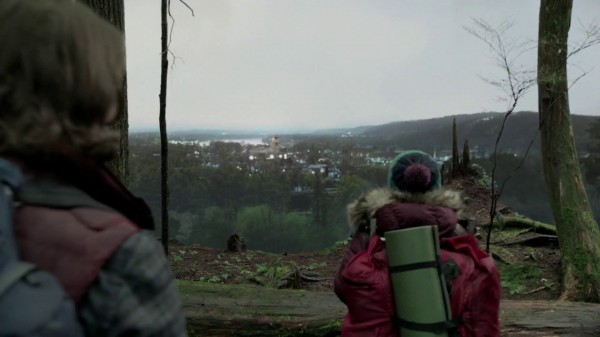 Where is Owen’s father? Storybrooke characters are back to precursed personalities. What will happen to Mary Margaret now? Who is “Her”? What will Greg do? And will Regina become the Evil Queen again?

In the second movie, TRON: Legacy, written by Kitsis and Horowitz, the name of the actor who played young Sam Flynn (the son) was Owen Best. As well, the story line follows the same story line as TRON. In both movie and OUAT, father is trapped within a world he doesn’t belong and his son is soon trapped as well, as he searches for his father. The only difference is that the movie is a digital universe vs Storybrooke. How brilliant were K&H to bring TRON to OUAT and had it fit it so smoothly? 🙂

Is Gregary Mendel trapped in Storybrooke, or can he leave whenever he wants to?

When was the library closed? Why was it closed? During this episode, we see that the library is clearly closed and boarded up.

There were a few slight continuity issues from the pilot episode and this one: Mary Margaret’s earrings, hair, and makeup were slightly different.

We love the continuity between the pilot episode when we’re introduced to Storybrooke: the sign Marco was putting up, Ruby and Granny arguing over shifts, Gold walking down the street, Dr. Hopper walking Pongo, “… for as long as I can remember.” etc.

Kurt and Owen were camping inside the town line, close to the toll bridge.

Was Regina given false memories in Storybrooke so she’d know how to be Mayor of a town in a new realm?

Snow retained her partiality for white flowers. The flowers she brought to John Doe in the hospital were not her favorite snow drop flower, but they were white. Her taste in flowers carried over to her Storybrooke self. Were people given certain similarities to their true selves in their Storybrooke selves?

We enjoyed seeing Regina respond to the curse and being the only one who really knows what’s what in Storybrooke.

We are so amused by the fact that Regina’s face was totally made up each morning when she woke up in her bed.

Regina had to learn how to cook. The first time we saw her make lasagna, Owen said he didn’t like it and she admitted she wasn’t much of a cook. Much later, at the welcome-home gathering for Emma and Mary Margaret, she brags about her lasagna and says she adds a special ingredient, red pepper flakes, to “give it some kick.”

Regina was the only one affecting change as the days repeated themselves. Example: She took Mary Margaret to the hospital on the first day; every day following that one, Mary Margaret visited John Doe as a volunteer.

In the diner, we noticed an amusing newspaper clipping. The date was clearly visible.

Do you think Regina still has the lanyard Owen gave her?

Can you foresee a love connection between Owen/Greg and Regina? Ew! (Please say no)

Do you think Kurt aged while he’s been held in Storybrooke? Where is he??? What did Regina do with him?

Regina had to learn how to cook.

Did Owen make Regina want to work on her cooking? Sometime in season 1 towards the end Regina says she makes one heck of a lasagna.

Greg vowed to find his dad. Since Kurt was supposedly in Storybrooke for the entire time, would he have aged or not? He was within the town limits (supposedly), but he wasn’t somebody affected by the curse. If he did age, you would have to think he is somewhere around Marco/Gepetto’s age. And the only place I can imagine where Kurt is is the “insane asylum” in the hospital that Regina keeps people locked in.

Thanks for your great podcasts!
OnceWizard – C.J.

Gold’s shop had a few familiar objects in it: genie lamp, mobile, puppets…

Regina admits to Mr. Gold (who is ignorant) that the town’s obedience isn’t genuine. She’s not satisfied with forced obedience.

How did Regina get Henry? Gold could not leave or contact the outside world, yet he said he “procured the boy for her.” How did they get him? Could August have made that happen? Did Regina leave to get Henry? How did that happen?

Storybrooke’s invisibility was confirmed in this episode.

What would have happened if someone walked down the dirt road that people saw instead of Storybrooke?

How did August learn where Storybrooke was? He hinted that he might have been there before he met Emma there.

We think that though Regina had opportunities to become a mom in Storybrooke (“city council meetings” with Graham), the state of time there in cursed Storybrooke prevented it because nothing was changing and no one was growing. It was impossible for her to get pregnant.

What made Regina decide to put Graham’s heart in her vault after this episode? When Emma got to Storybrooke, that’s where his heart was.

How did Graham know to come to Regina’s office to get Kurt?

We totally feel sorry for Kurt. Regina collects and/or punishes people who don’t do what she wants them to do. She did that with Graham, Hansel, Gretel, Hansel and Gretel’s dad, and now Kurt. She’s just a cruel lady.

Do you think Kurt met August at some point before he came to Storybrooke?

Who is this “her” that Greg/Owen keeps contacting?

Do you think it’s possible that Greg’s “her” could be Neil’s fiance, Tamara in Manhattan? Greg’s from Pennsylvania.

Did young Owen really go live with his uncle, or could he have gone to the same foster home as August and Emma?

Does this “her” know what Greg Mendel has been looking for? Is she familiar with the idea of an invisible city? How much did she know about Storybrooke before Greg found it and has been sharing videos of it with her?

Is it possible that “H. E. R.” are initials? We think that’s unlikely.

Daniel will drink coffee if he’s wrong about Bae’s not being from Neverland. When will we know more about Bae’s circumstances after the bean-hole incident.

Cora’s casket said “Cora Mill’s” even though in the Enchanted Forest nobody had a last name, that we know of.

Gold was actually giving Regina good advice when he said, “Time to cut your losses.”

Will Regina really be satisfied when she gets everything? Maleficent warned her that if she cast the dark curse, that she would create a gaping hole in her heart that could never be filled.

The good guys are starting to change values. Snow White’s case makes it clear. They’re becoming more like messy, inconsistent, flawed human beings– like us. Are they being affected by “a land without happy endings”?

Is the prophecy that “a young boy will be Rumpelstiltskin’s undoing” been fulfilled with the whole incident involving Henry, Hook, Rumpelstiltskin, Emma, and Neil in Manhatten? Does Gold still want to kill Henry?

The Curse of the Empty-hearted:

SCREENSHOT OF THE CURSE PARCHMENT

What was Regina looking for in the vault?? Did she find it? It was clear that she was looking for something specific because she said, “Where is it?!”

It couldn’t have been the locket she was looking for, because she continued searching after she picked it up.

Henry shares the same opinion about magic that his dad, Neil/ Baelfire, had. The apple didn’t fall far from the tree.

Henry is a good liar. He totally came up with a lie on the spot to tell Greg.

Is Greg a good guy, like his dad was, in calling Regina simply in order to inform her that her son is running away? Or are his motives less than noble and he’s simply trying to collect evidence to use against her?

Can magic be destroyed?

What will happen now that Regina doesn’t want to kill Snow White?

It seemed that Snow White was being suicidal, not noble, when she asked Regina to kill her.

Where is Rumpelstiltskin’s story headed now that he’s got what he set out to obtain? We all agree that he should pay a visit to Belle soon.

Where is Kurt?! Is he still alive? Will he have aged? Why did Regina keep him?