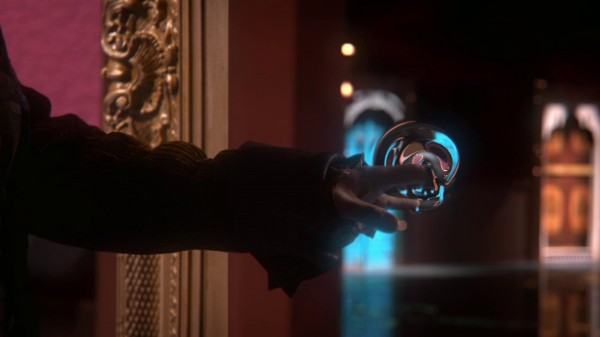 We only have a couple of weeks before the second half of the third season of Once Upon a Time begins, as well as the second half of the first season of Once Upon a Time in Wonderland but we just can’t help but talk about what’s in store for us next month. So before they come back, join us as we discuss general reactions and theories about these two shows in this crossover episode.

Jacquelyn and Erin J joined us for this discussion.

This episode is sponsored by Audible. Get a free audiobook to keep and a free 30-day trial.

Of all characters from both shows, Cora is one of the shows that every ONCErs are eager to see in Once Upon a Time in Wonderland. Being the Queen of Hearts, Cora is one character that the story could not go without. And since Will doesn’t have his heart, although he seems to know where it is, this particular scene seems like it was done by Cora. However, it could also be Anastasia who ripped it and not really Cora. Plus, if it was Cora who taught Anastasia everything she knows about magic, it could make more sense if it was Ana who took Will’s heart… IF she can rip hearts as well, that is, especially knowing her reasons are for siding with Jafar during the Winter Finale.

On the other hand, we haven’t heard Alice talk about the Queen of Hearts, since Will (Knave of Hearts) should have worked with Cora. However, it could also be because Alice has never met her when she was in Wonderland.

When Regina enacted the curse, Cora was seen in the Enchanted Forest with Hook, shielding the small part of the Enchanted Forest from her daughter’s curse with a dome using her magic. Looking back when Cora left Wonderland in the episode “Queen of Hearts”, is that when Anastasia come to power as the Red Queen?

So which show is doing better? While each show have their own themes, Once Upon a Time has a better music; the sound effects meshed well with the emotions, as well as the things that happen in every episode. Wonderland, however, seem to lack in it; the music for Alice and Cyrus, however, fits them perfectly.

Speaking of characters, let’s put different characters from the shows in a cage fight as to who would win:

General Reactions and Theories: Once Upon a Time in Wonderland

Are we going to see any more character crossover with these shows aside from Cora? Is there a chance for us to see Emma, Snow, Charming, Hook, or Regina end up in Wonderland or Jafar, Cyrus, the Red Queen or Alice in Once Upon a Time? But even if they can cross each other’s series, how would it fare to the story? On a side note, a lot of ONCErs seem to be okay in seeing Will in Once Upon a Time.

Moreover, it is quite disappointing that there was no mention in Once Upon a Time of the giant hole left by Will in Granny’s Diner during Once Upon a Time in Wonderland’s pilot episode. They could have made a little comment, but the show stayed tight-lipped with it as if it never happened.

Now that Will become the new genie, what happens to him now, and where he is? Where will he end up and how can they find him? Are any of them going to die and sacrifice themselves to save the others? In Once Upon a Time, there are numerous characters that they can kill off mid-season (like Neal), but Once Upon a Time in Wonderland don’t have as much characters compared to Once Upon a Time. But storyline-wise, anyone from any of these two shows can be killed off if it will help develop the story further.

Now that we’ve learned that Will doesn’t have his heart in the majority of the episodes in Once Upon a Time in Wonderland, it doesn’t seem to fit through with we have seen of how Cora had become when she ripped her own heart. While Cora stayed arrogant and wanted to gain more power, Will seemed to keep doing the right thing. Is it possible for them to retain their personality despite their hearts not being inside of them?

ABC is changing its online TV viewing rules for the fans. Right now, ABC is implementing a program wherein each viewer must verify their cable subscription on ABC.com prior to watching the shows the next day after it aired. If a viewer don’t have cable or a Hulu Plus account, however, then they would have to wait 8 days before the show becomes available to them.

Provided by Hunter Hathaway and Jacquelyn.

Once Upon a Time Spoilers

Once Upon a Time in Wonderland Spoilers